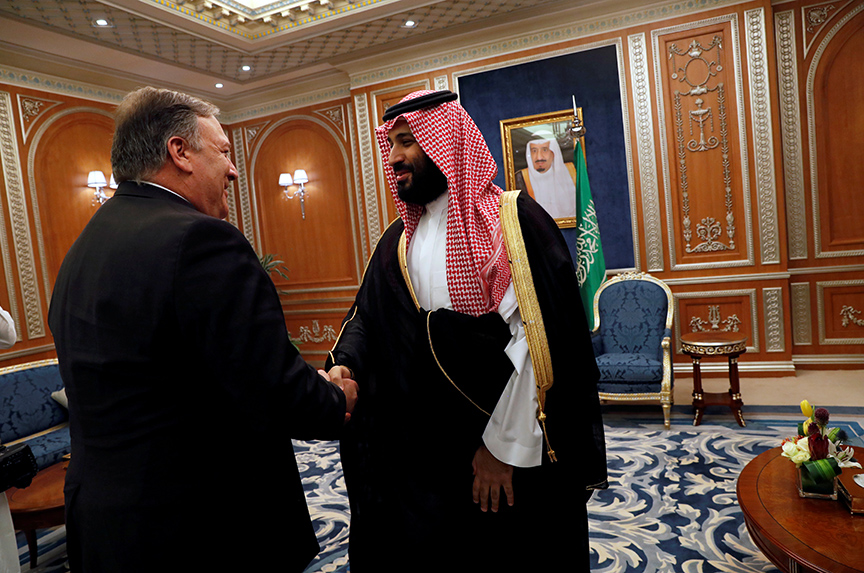 The US Treasury Department on November 15 slapped sanctions on seventeen Saudi officials in response to the murder of Washington Post columnist Jamal Khashoggi in the Saudi Consulate in Istanbul on October 2.

“The Trump administration needs to balance competing interests in its response to Khashoggi’s murder, including but not limited to growing political pressure from Congress to hold Saudi Arabia accountable not only for this abhorrent incident, but also for its military campaign in Yemen, and the administration’s desire for Saudi Arabia to be a key player in a coalition to counter Iran, among broader elements of the bilateral relationship,” said Rachel Brandenburg, director of the Middle East Security Initiative at the Atlantic Council’s Scowcroft Center for Strategy and Security.

The crown prince is more widely known by his initials, MbS.

Khashoggi, a critic of the Saudi crown prince, had been living in exile in Washington over the past year. On October 2, he visited the Saudi Consulate in Istanbul to collect a document to certify his divorce so he could marry his Turkish fiancée. He was never heard from again.

Saudi officials initially said Khashoggi had left the consulate, but later changed their story to say he was killed in a “rogue operation.”

US Treasury Secretary Steven Mnuchin said the sanctioned individuals were “involved in the abhorrent killing” that “targeted and brutally killed a journalist who resided and worked in the United States [and] must face consequences for their actions.”

US Secretary of State Mike Pompeo said the individuals were sanctioned “for serious human rights abuse resulting from their roles in the killing of Jamal Khashoggi.”

“At the time of Khashoggi’s killing, these individuals occupied positions in the Royal Court and several ministries and offices of the Government of Saudi Arabia,” Pompeo said.

Richard LeBaron, a nonresident senior fellow with the Atlantic Council’s Rafik Hariri Center for the Middle East, said: “The purpose of sanctions is to change objectionable behavior, or at least to apply a cost to it.”

But, LeBaron added: “While sanctions are an important way of sending a message, they are also a blunt instrument that authoritarian leaders find ways to work around.”

The US action came hours after Saudi Arabia’s public prosecutor’s office said it would seek the death penalty for five people charged in the case.

As a result of the US action, the sanctioned individuals’ assets within US jurisdiction will be blocked and US persons are prohibited from engaging in transactions with them.

“This is an important political statement and sends the right signal, but it is unclear whether these sanctions will have any real financial impacts because it is unclear that these individuals have any assets under US jurisdiction,” said William Wechsler, senior adviser for Middle East programs at the Atlantic Council and interim director of the Rafik Hariri Center for the Middle East.

Pompeo described the US sanctions as “an important step in responding to Khashoggi’s killing.”

“The State Department will continue to seek all relevant facts, consult Congress, and work with other nations to hold accountable those involved in the killing of Jamal Khashoggi,” he added.

“In the case of Saudi Arabia,” LeBaron said, “the more important issue for US foreign policy is whether the crown prince will ever be a truly reliable partner. His track record so far is not encouraging.”

Saudi Foreign Minister Adel al-Jubeir earlier said a Saudi investigation into Khashoggi’s murder had exonerated the crown prince. “His royal highness the crown prince has nothing to do with this issue. This was a rogue operation,” al-Jubeir told reporters in Riyadh.

Meanwhile, the Saudi public prosecutor’s office said Khashoggi was killed in a “fight and a quarrel.” Prosecutors said Khashoggi was tied up and injected with an overdose of a sedative that killed him. His body was then dismembered and removed from the consulate.

“They say [Khashoggi] resisted going back to their country and was killed. However, this murder was premeditated as we had announced before,” Çavuşoğlu told reporters. “The dismembering of the body is not an instant decision. They brought the necessary people and tools to kill him and dismember the body in advance.”