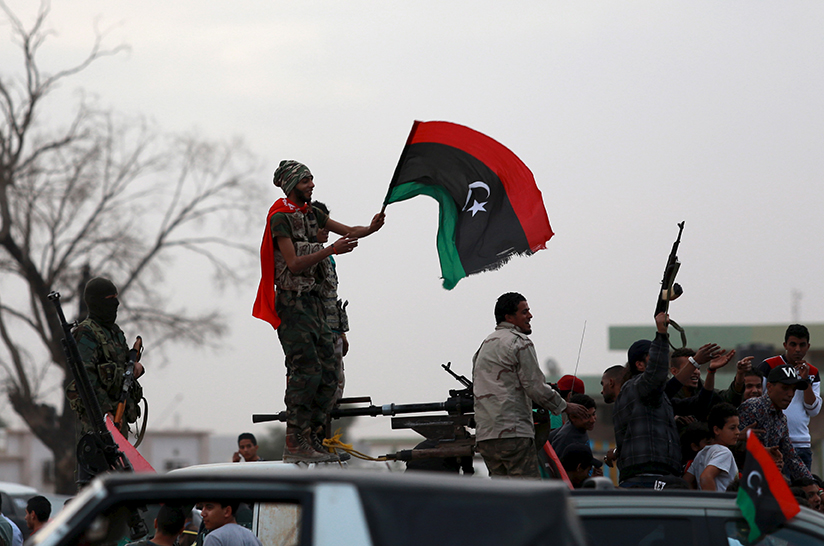 US airstrikes that are neither invited by the Libyan authorities nor coordinated with Libyan armed forces may produce a dangerous backlash against the West, according to the Atlantic Council’s Karim Mezran.

US warplanes conducted airstrikes on an Islamic State of Iraq and al-Sham (ISIS) base on the outskirts of the western Libyan city of Sabratha on February 19. Noureddine Chouchane, a Tunisian operative linked to two major terrorist attacks in Tunisia last year, was the target of the strikes. More than three-dozen people were killed in the operation. Chouchane is believed to be among the dead.

Such foreign intervention “may unleash anti-Western sentiments,” said Mezran, a Senior Fellow in the Atlantic Council’s Rafik Hariri Center for the Middle East.

Libyans’ failure to agree on a national unity government is testing Western patience as the ISIS threat grows in the North African nation that sits across the Mediterranean from Europe. Libya is also a conduit for many of the migrants who are pouring into Europe.

US President Barack Obama said on February 16 that: “With respect to Libya, I have been clear from the outset that we will go after ISIS wherever it appears, the same way that we went after al Qaeda wherever they appeared.”

“We will continue to take actions where we’ve got a clear operation and a clear target in mind,” Obama said, adding, “And we are working with our other coalition partners to make sure that as we see opportunities to prevent ISIS from digging in, in Libya, we take them.”

Mezran cautioned that any operation that has the destruction of ISIS as its singular goal is bound to fail. ISIS is a symptom and not a cause of the problem, he said. Rather, the cause of the chaos in Libya is exemplified by two rival governments—one in Tripoli and the other, an internationally recognized government, in Tobruk.

“If you want to defeat the terrorists in Libya you have to solve the crisis of the Libyan state and bring back order and stability,” said Mezran. “Foreign intervention that has restoring stability as its goal may be well received by the Libyan people.”

Q: The United States carried out airstrikes on an Islamic State base in Sabratha today. Do such operations have the approval of Libyan authorities?

Mezran: They do not. Military strikes conducted in such a way in a foreign territory may cause a backlash within the general population. Foreign intervention that is not invited by the recognized Libyan government and is not coordinated with Libyan forces on the ground may unleash anti-Western sentiments.

It is not up to me to judge the effectiveness of a military operation, but the political aspect of it is definitely negative. If foreign intervention has to come in Libya, it has to be invited by Libyan authorities, done in coordination with Libyan forces, and conducted under international supervision.

ISIS is not the problem in Libya. It is a symptom of the crisis. Hitting ISIS is like cutting the head off a hydra, it will regenerate. ISIS cannot be defeated until a solution is found to the conditions that led to the prosperity of such a phenomenon, and that is the state of anarchy, the civil war, and the destabilization of Libya. If you want to defeat the terrorists, you have to solve the crisis of the Libyan state and bring back order and stability. Foreign intervention that has restoring stability as its goal may be well received by the Libyan people.

Q: There have been reports since late last year about US Special Forces on the ground in Libya. Has there been any backlash as a result?

Mezran: Rumors about foreigners doing this or that are spreading, but they are not proven. The sentiment in general is that if they hit the terrorists it is OK, but an open-air attack like the one this morning will not be welcomed. If the military initiatives recur and the Americans behave like they did in Yemen with drone strikes, I am sure that even those who are in favor of this will change their mind. This kind of behavior is very dangerous.

Q: Do you expect the United States to ramp up its military operations in Libya?

Mezran: In Tripoli, there are rumors of a military operation that is more than just pinpricks. But it is not the kind of operation that would restore stability.

Q: Is there an appetite for foreign intervention in either of the governments—in Tripoli or Tobruk?

Mezran: Both governments consider ISIS a problem, but they don’t have the strength to do anything about it. The government of national unity, if it is accepted by the Tobruk parliament, will have to be in Tripoli. At that point, foreign intervention will definitely be needed, but again it will need to be called for by the government and coordinated with Libyan forces.

Q: The House of Representatives in Tobruk had some objections to the unity government plan. Do you expect approval anytime soon?

Mezran: The presidential council has submitted a shorter list at the request of the House of Representatives. The President of the HoR has called for an extraordinary session on February 22 and a vote on this list on February 23. The UN’s Libya envoy, Martin Kobler, has urged the HoR to accept this government and move forward because of the economic and humanitarian crisis, as well as the fear of ISIS.

Q: The West is running out of patience in the face of these delays to form a national unity government.

Mezran: There are two tendencies in the West. One is to go for a short cut, which is exactly what they did this morning. That is the most rewarding option for Western leaders because it involves much less commitment and expense, but it is not the correct approach. The correct approach is to reconstruct the Libyan state and bring back into the political fold all those who have been marginalized, including former support of [Libya’s late leader Moammar] Gadhafi.

Q: What is the extent of the ISIS problem in Libya?

Mezran: The numbers fluctuate from a serious assessment of 1,500 to 6,000 fighters. It is not clear whether this includes young Libyans in Sirte [Gadhafi’s hometown] who are not necessarily members of ISIS, but belong to tribes that supported Gadhafi.

At present, ISIS is present in Sabratha in the west, in Sirte till the outskirts of Ras Lanuf in central Libya, and in Benghazi in the east. ISIS is not a huge problem in Libya—yet. It is, however, growing and connecting with criminal gangs. It’s like a cancer; if you don’t treat it right away it can become deadly. Right now I think it is still treatable.

Q: Are there many Libyan recruits in ISIS’ ranks in Libya, or are these mostly foreigners?

Mezran: A large percentage of the ISIS fighters are Tunisians, Yemenis, Algerians, Egyptians, and other nationalities. But there are, undoubtedly, also many Libyans.

Q: In Libya, to what extent are former supporters of Gadhafi joining the ranks of ISIS as former Baathists have done in Iraq?

Mezran: The situation in the two countries is different, but, yes, there is this similarity. Groups that have been marginalized by the new government will find a flag under which to rally their grievances in an attempt to regain power.

In Iraq, there has been a close merging between the Baathists and ISIS to the point where it has become difficult to separate the two. In Libya, that has not happened yet. Some Libyan tribes are sympathizers of ISIS, but they do not share its ideology.

Q: What is the extent of coordination between ISIS in Libya and ISIS in Syria and Iraq?

Mezran: There is a continuous flow of information, people, and orders between the groups.

Q: What does ISIS want in Libya?

Mezran: Their fixation is controlling territory. In Libya, they have tried to guarantee a safe haven for their fighters by controlling territory and threatening the other forces—they have carried out attacks on oil fields, bombings in Tripoli, Misrata, and Zliten. Whether their purpose is to conquer Libya and run it is a caliphate, I just don’t see how any rational person can possibly think that.

Q: What is the level of coordination between ISIS and Ansar al-Shariah, which was behind the attack on the US diplomatic complex in Benghazi?

ISIS’ recruitment strategy has caused a backlash from other militant groups. In Derna, for example, ISIS first tried to dominate the city and then were eventually expelled after the city’s Shura Council and other Islamist groups joined with the citizenry to kick them out. It’s a complex situation. Not all Islamists are aligned, and not all Islamists are the same.