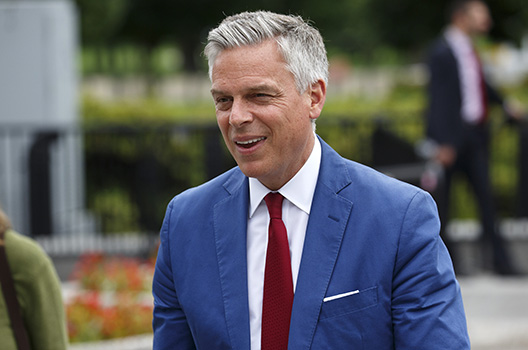 US Ambassador to Russia Jon Huntsman announced in an August 6 letter to US President Donald J. Trump that he intends to resign from his post effective October 3, 2019.

Huntsman, who has served as the US ambassador in Moscow since October 2017, reportedly told Trump that he had made the decision to leave so he and his wife could “reconnect with our growing family and responsibilities at home.” Huntsman previously served as US ambassador to Singapore from 1992-1993, governor of Utah from 2005–2009, and US ambassador to China from 2009–2011. Huntsman served as chairman of the Atlantic Council from 2014 until his confirmation as ambassador to Russia in 2017.

“We all owe a tremendous thanks to Ambassador Jon Huntsman, the Atlantic Council’s former chairman and one of the United States’ finest public servants,” Atlantic Council President and CEO Frederick Kempe said. Huntsman, who is the only individual to have served as both the US ambassador to Russia and China, “leaves Moscow after two years of gracefully and skillfully navigating one of the world’s most challenging bilateral relationships,” Kempe explained.

Huntsman’s resignation has sparked speculation that he will run for another term as governor of Utah. A source close to Huntsman told the Deseret News that he is “keeping an open mind” about entering the 2020 race, having served two terms previously as governor.

Damon Wilson, executive vice president of the Atlantic Council, noted that Huntsman “has opted for some of the toughest assignments in his public service—and represented our nation so well in complicated situations. As chairman at the Council, he inspired us to take on meaningful, ambitious work—and avoid small ball.”

Huntsman “was one of the Trump administration’s strongest and most experienced ambassadorial picks, having served previously as ambassador to China and as chairman of the Atlantic Council, where he was a firm advocate for the values of democracy and US global leadership,” Alexander Vershbow, an Atlantic Council distinguished fellow and a former US ambassador to Russia, NATO, and South Korea, said.

“Jon Huntsman is an extraordinary public servant devoted to the highest ideal of service,” John Herbst, director of the Atlantic Council’s Eurasia Center and former US ambassador to Ukraine and Uzbekistan, remarked.

According to Herbst, Huntsman “sought to work in the most difficult and important diplomatic postings. He wanted to go to Moscow when the US-Russia relationship was at its nadir.” During Huntsman’s tenure in Moscow, US-Russian ties were challenged by the assassination of a former Russian intelligence officer on British soil in March 2018, the United States’ withdrawal from the Intermediate-Range Nuclear Forces Treaty over alleged Russian violations, the seizure of three Ukrainian navy vessels by Russian naval forces in the Kerch Strait, and US sanctions over Russian interference in the 2016 US election.

“Ambassador Huntsman had the skills needed to help advance US-Russian relations,” Daniel Fried, Weiser Family distinguished fellow at the Atlantic Council, said. “But he had the misfortune of holding down a great job in an unpropitious era,” Fried continued. Vershbow explained that Huntsman “had little opportunity to put his talents to good use, presiding over the [US] Embassy at a time of continuing Russian aggression against Ukraine, escalating economic sanctions, sweeping diplomatic expulsions, and information warfare.”

In his resignation letter, Huntsman wrote that the United States “must continue to hold Russia accountable when its behavior threatens us and our allies. While much of what divides us is irreconcilable, there are common interests we cannot ignore.” He explained that “through our diplomacy, we have worked to stabilize years of acrimony and incertitude with the hope of a better relationship. Failure is not an option, and the people on both sides deserve better.”

While Huntsman oversaw dialogue between the two sides—including meetings between Trump and Russian President Vladimir Putin on the sidelines of Group of Twenty (G20) meetings and a full-fledged summit in Helsinki in July 2018—Fried explained that “given Putin’s commitment to keeping relations with the United States on a chilly-to-hostile footing, and the depths of Russia’s current period of stagnation, the upward trajectory of relations Ambassador Huntsman sought was just not in the cards.”

Despite the difficulties, Huntsman “worked tirelessly to advance US interests [in Russia] in challenging circumstances,” Herbst said. “The nation owes him a great deal for his efforts and example.”

Image: US Ambassador to China Jon Huntsman arrives at the White House in Washington, US, May 30, 2018. (REUTERS/Joshua Roberts)