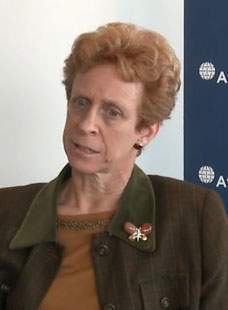 Both Europe and the United States are designing broader sets of economic sanctions against Russia over its assaults on Ukraine says the Atlantic Council’s Fran Burwell. Like the Obama administration, the European Union is considering a further phase of sanctions that will likely include restrictions on Russian banks doing business in Europe, and on European companies’ sale of services to Russia’s oil and gas industries, said Burwell, who directs the Council’s Transatlantic Relations Program.

Within the EU, eastern countries closer to the threats posed by the Russia-Ukraine conflict have been pushing for tougher action, and the center of gravity in Europe’s debate seems to be moving toward their position, Burwell said.  But that has evolved slowly in an institution composed of 28 member nations, many of which have had difficulty shaking off the economic malaise of the 2008 financial collapse and are thus hesitant to impose sanctions on a Russia that is a significant part of Europe’s economy, through its trade and investment..

Asked in a video interview what step the US government could take to strengthen Europe’s response to Russia’s aggression, Burwell was categorical: “I think there’s no question,” she said. “It would be to permit the export of our energy products to Europe,” meaning notably liquid natural gas (LNG), she said. US law permits such exports only to countries with which the United States has a free trade agreement, she noted, and legislation is before Congress to drop that restriction.

While a startup of significant US LNG sales to Europe will take years, the United States and European Union should dramatize that choice now to prepare energy markets for the change, Burwell said. Europe should declare its commitment to reducing its purchases of Russian energy “by, say, 20 percent over the next two years,” and the US should even send a symbolic first tanker-load of LNG to Europe.  With these steps, “you get the full impact on the market” to maximize the pressures on Russia to step back from its attacks on Ukraine, she said.