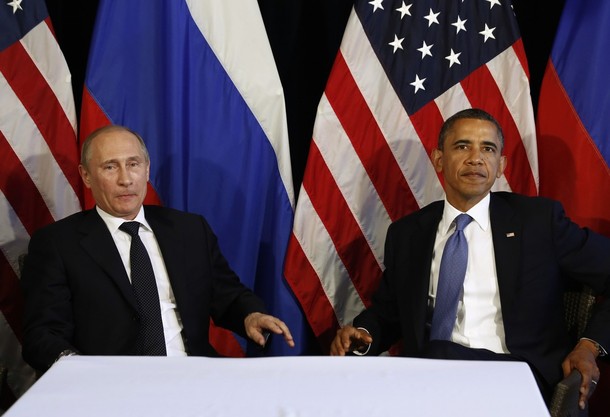 Both the US and Russia are circumventing the UN Security Council to deal with the worsening crisis in Syria. Neither is making much progress.

Konstantin Kosachev, former chairman of the foreign affairs committee in the Russian parliament and now director of an agency that deals with former Soviet republics and Russians abroad, told a Washington think tank Monday (June 18) that there was no chance that Russia would permit a so-called Chapter VII resolution authorizing foreign military intervention in Syria. Russia is furious that such a resolution enabled NATO to help overthrow the Qadhafi regime in Libya. The threat of a Russian veto forced the US to go around the Security Council in the 1990s to intervene in the Balkans.

The Russians are also trying to go around the council but with a different goal: to organize a contact group to discuss next steps in Syria. The Russians want to include Iran — which the US opposes — and exclude members of the Syrian opposition, according to an article today (June 19) in the Lebanese newspaper An-Nahar.

The US, in turn, is working through a “Friends of Syria” group that includes Turkey and key Arab states that support the opposition Syrian National Council and the Free Syria Army. Russia is not part of this group.

It is rare since the days of the old Soviet Union that Russians have figured prominently in the affairs of the Middle East or competed so obviously with the US for influence there. But the spread of the Arab Spring to Russia’s last ally and outpost in the region — and the growing diplomatic isolation of the Bashar al-Assad regime — have made Moscow a potential power broker in Syria.
US President Barack Obama and Russian President Vladimir Putin discussed Syria Monday in an evidently chilly exchange on the outskirts of a G-20 summit in Mexico. The two agreed on the need for a political process and an end to violence but not on the ouster of Assad, who the US regards as far too damaged goods to remain at the helm.

According to the New York Times, Putin spent much of the meeting pointing to “what the Russians view as failed examples of political transition in Egypt and Libya as well as their concern that the West does not have a credible plan for what would happen to Syria’s various battling factions and ethnic groups” if Assad stepped down.

Kosachev, speaking at the Center for the National Interest in Washington, defended Assad and accused the US of a double standard for not opposing other Arab regimes with poor human rights records that are US allies. Rather incredibly — given that more than 10,000 people have died in Syria since an uprising broke out there last year — Kosachev said Saudi Arabia’s human rights record was even worse.

“We do not hear a single word about Saudi Arabia, which is much more serious than Syria or any other country in the region [in terms of] human rights,” Kosachev said.

He asserted that the US provoked the protests in Syria by declaring that the Assad government was “unacceptable.” In fact, it took several months of a bloody government crackdown before the US called for the Syrian leader to step down.

Trying to have it both ways, Kosachev said that Russia would block a UN resolution authorizing force against Assad but that Russia was defending international law by refusing to act unless the UN Security Council approved it.

“As long as we don’t have UN Security Council decisions, we don’t like the way certain countries act unilaterally,” he said. “What we try to defend is the role of international law.”

At the same time, Russia is continuing to send weapons to Assad, including refurbished attack helicopters, and has dispatched ships to a small Russian base at the Syrian port of Tartus. The ships could evacuate Russian military personnel and other Russians living in Syria in the event that the civil war gets worse.

Paul J. Saunders, executive director of The Center for the National Interest, wrote in the center’s publication Tuesday that “Moscow’s fundamental problem is that twenty years after the collapse of the Soviet Union, Russian leaders have still not succeeded in defining and establishing a genuine global role for the country.

“At bottom, Russian foreign policy is about what its leaders don’t want, not what they do want, and about the prerogatives that they should enjoy, not what they can contribute to solving pressing problems. This can succeed to a degree but is unlikely ever to win the role, respect and deference that Russian leaders appear to crave.”

At the same time, Saunders criticized the Obama administration for an ad hoc approach to Syria and ambivalence about what it is willing to do — and what it wants to achieve — in the wider Middle East.

“The real question is whether the Obama administration will find a way to lead — or be content to stand on the opposite side of the field, shouting angrily at Moscow and the players on the field,” Saunders wrote.