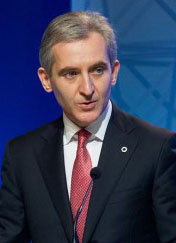 The Obama administration continues its show of support for the three ex-Soviet countries that are building closer ties to the European Union against coercive pressures from Russia. Days after President Obama met Georgia’s prime minister – and as Washington works to respond to Russia’s military pressure against Ukraine — the White House hosts Moldova’s leader March 3. After his White House visit, Prime Minister Iurie Leancă will speak at the Atlantic Council.

Prime Minister Leancă heads a country the size of Maryland, with four million people, that like Georgia and Ukraine has been negotiating an Association Agreement with the EU through its Eastern Partnership program. In Moldova, as in Georgia, Russia backs a secessionist region with the presence of Russian troops. Russia’s client proto-state, called Transnistria, stretches along the 10 percent of Moldova that runs in a narrow band between its eastern border, with Ukraine, and the Dniester River.

“This is an issue about whether a country in Europe’s east, a country that used to be part of the Soviet Union, is able to make a decisive move towards Europe,” says Atlantic Council Executive Vice President Damon Wilson. He noted a Russian threat to dismember Moldova, issued publicly in September by Russian Deputy Prime Minister Dmitriy Rogozin while visiting Moldova’s capital.

“Moldova’s train en route to Europe would lose its wagons in Transnistria,” Rogozin declared at a press conference. He reinforced the threat with another – to cut off the Russian gas supplies on which Moldova is heavily dependent. “Energy is important,” Rogozin said at the time. “The cold season is near. Winter is on its way. We hope that you will not freeze this winter.”

Leancă heads a three-party parliamentary alliance, the Pro-European Coalition, that took office last summer after the opposition Communist Party forced its predecessor to resign. The country must hold elections for a new parliament before the end of this year.  Leancă faces a delicate six months or so before Moldova might be in a position to finalize the agreements it initialed last year to build a broader economic relationship, including a free-trade deal, with the European Union. Moldova’s economy already is one of the poorest in the former Soviet Union, and Russia in September banned imports of Moldovan wine. It could do more damage by deporting Moldovan emigrants working in Russia, whose remittances to their home country are an important economic support.