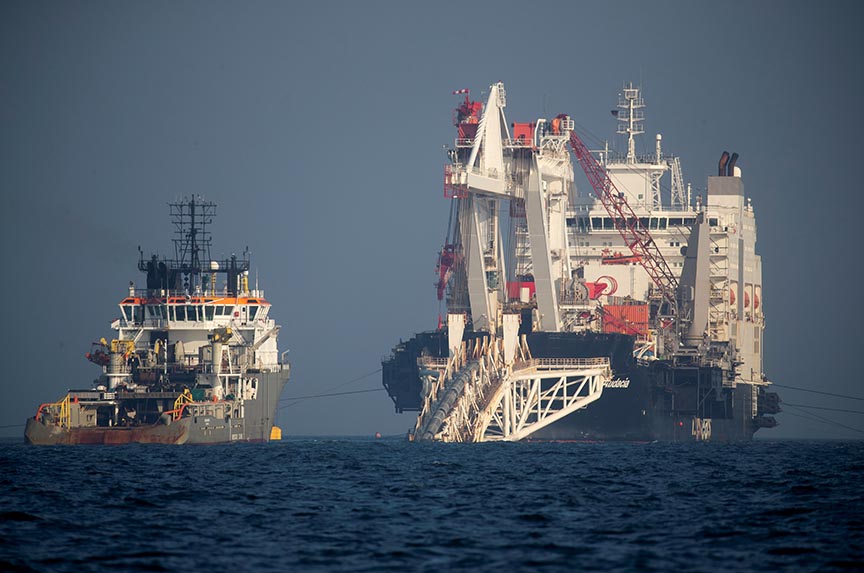 Despite touting its role as the pro-transatlantic alliance arm of the US government, Congress is threatening to undermine critical European partners with new legislation that would impose sanctions on key allies. The Protecting Europe’s Energy Security Act would mandate sanctions on those involved in the Nord Stream 2 gas pipeline project. While there are strong arguments against the project, the imposition of sanctions on those involved (and effectively legislating European energy policy from Washington) is the wrong way to convince key allies to further diversify away from Russian-origin energy sources.

Nord Stream 2 is intended to transport Russian natural gas through the Baltic Sea into the European Union (EU)’s internal market. Since EU domestic gas production is forecast to drop by half over the next two decades, the EU is keen to identify sources to fill the anticipated shortfall and simultaneously increase pipeline capacity. The Baltic Sea offers a short, direct route from northern Russia to northwest Europe, thereby lowering costs, solidifying an environmentally friendly energy solution, and theoretically increasing security of supply. Notably, it also enables Russia to establish a new pipeline that bypasses Ukraine, thereby depriving Kyiv of valuable energy transit fees and allowing Moscow more flexibility to use energy as a leverage point with Kyiv without broader European impacts.

While the EU has purportedly prioritized energy diversification away from Russia — particularly given Moscow’s history of using access to energy as a political tool — the government prioritization of this policy has not prompted a parallel commercial market shift.  Instead, Russia continues to supply 40 percent of the EU’s natural gas, due in part to the role of commercial energy companies operating in the EU market. US policy makers on both sides of the aisle have raised concerns about this, and the Nord Stream 2 project more broadly, to their European counterparts from the outset.

In contrast to the Trump administration’s antagonistic approach toward Europe, Congress has largely prioritized direct diplomatic engagement to voice its concerns. While German and some other Western European leaders defend the pipeline, Central and Eastern European counterparts echo US concerns (though are generally not supportive of new sanctions as a solution).

Specifically, the Act mandates blocking (asset freeze) sanctions on those involved in the sale, leasing, facilitation, or provision of the vessels used in the undersea construction of Russian energy export pipelines at 100 feet below sea level, including Nord Stream 2.  While this may seem like a technical sanction aimed at Russia, the potential targets are actually major European companies including Germany’s Uniper and Wintershall Holding, Engie of France, Austria’s OMV, and Anglo-Dutch Shell. Since Russia lacks the technology needed for deep-water projects it continues to rely on Western contractors for such pipeline development. The Act also includes the authority for visa bans on principal shareholders and corporate officers of any of these companies.

The effects of imposing economic and financial sanctions on these major European energy companies would not be confined solely to Europe. Blocking sanctions would directly hit the companies’ US assets but would also impact energy trade and any payments that simply traverse the US financial system, often solely to switch currencies. It would stifle existing and future cooperation between US and European energy firms, such at the Wilhelmshaven liquefied natural gas (LNG) terminal in Germany that Uniper is developing and will help both diversify German energy sources away from Russian gas and provide business opportunities for US LNG companies. The imposition of any such sanctions would also certainly dampen the EU’s appetite for continued sanctions cooperation with the United States, particularly when the next round of Russia-related sanctions requires renewal.

The Act also includes discretionary sanctions on those involved in the underwriting, insurance, or reinsurance for any of the vessels involved in the project. While the range of discretionary insurance sanctions from which the administration is directed to choose at least five options stops short of full blocking sanctions, the options still pack a punch. Among them, restrictions on foreign exchange, banking, investment, and equity could severely hamper an insurance firm’s global operations if imposed.

Seemingly more inane are the mandated reports on the effects of Nord Stream 2 on US national security and European energy dependence, and on those involved in the construction or repair of Nord Stream 2. Such reports may, however, inform future sanctions actions. Notably, the Act does include a national security waiver for the mandatory sanctions should the administration have the political appetite to prioritize its alliances over punitive measures.

Rather than advancing the diplomacy and support for allies advocated for by the senators behind the Act, this legislation prioritizes punitive action over meaningful solutions. The senators are right that Nord Stream 2 runs counter to Europe’s commitment to energy diversification, but using sanctions (yet again) to counter this foreign policy concern is the wrong policy tool to deploy. Instead of overusing the sanctions tool, Congress should prioritize its role as the pro-European alliance arm of the US government and support European efforts to diversify away from Russian energy sources in a few key ways.

First, Congress should help facilitate the flow of US gas to Europe. While the EU does not impose regulatory restrictions or market barriers on US natural gas being imported into the EU, the United States requires prior approval of liquefied natural gas exports to the EU. Removing this requirement would demonstrate that the United States is actually committed to supporting European allies’ energy diversification.

This could be complimented with a package of competitively priced US natural gas exports. As it stands, US gas is considerably more expensive than that from Russia, due in large part to the significant transit and logistics costs. While the US rate does provide the EU with leverage with which to negotiate with other gas suppliers, the higher rate makes the purchase of US natural gas far less attractive.  Providing temporary subsidies or other financial inducements may incentivize the EU to reconsider its Russian gas purchases — at least in the near term.

Additionally, Congress should support the EU’s mid-to-long-term energy diversification efforts. In addition to providing a near-term alternative to some Russian-supplied gas, the United States could proactively invest in EU domestic energy infrastructure as a longer-term strategy. The EU is already expanding its current energy framework, and also developing new capacities in the Adriatic Sea (on Krk island, Croatia), in the Baltic Sea (in Poland), and in the Mediterranean Sea (in Greece). These new and expanded projects will allow for a significant increase of domestic liquefied natural gas for the EU. To support such projects, Congress should pass the recently introduced European Energy Security and Diversification Act. This legislation would authorize $1 billion in financing for US public and private sector investment for European energy projects that, when coupled with increased diplomatic and technical support, will effectively support Europe’s energy diversification away from Russia.

The European Energy Security and Diversification Act reflects Congress’s efforts to effectively put its money where its mouth is by prioritizing the US-EU alliance with an investment in its strategic future. If Congress truly values this key historic alliance, it will refrain from antagonizing European allies through punitive sanctions and instead support the energy diversification desired by both the United States and the EU.