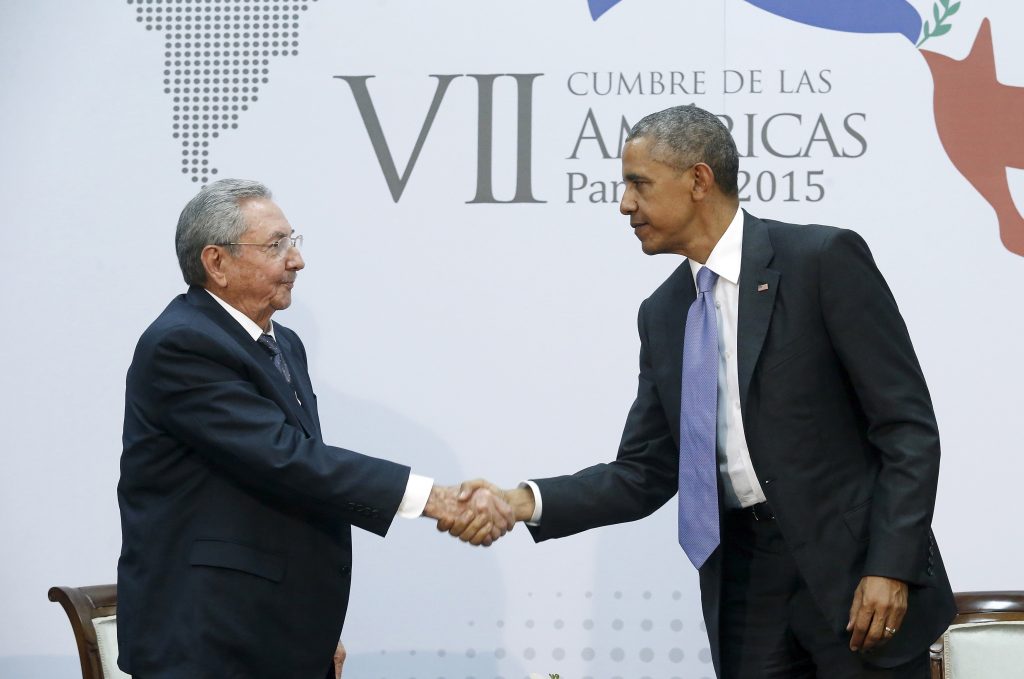 US President Barack Obama’s decision to take Cuba off the list of state sponsors of terrorism is a long-awaited move that “opens the door” to the re-establishment of relations with Cuba, said Peter Schechter, the Atlantic Council’s lead Latin America analyst.

Obama’s April 14 request to Congress to delist Cuba comes three days after his meeting with Cuban President Raúl Castro at the Summit of the Americas in Panama. That encounter was the first between US and Cuban leaders in more than five decades.

“Clearly there was a choreography here that somehow impeded President Obama from being able to announce this while he was in Panama,” Schechter, who is Director of the Adrienne Arsht Latin America Center at the Atlantic Council, said of the decision to delist Cuba. “But that’s OK. This will now open the door to the next step, which shall be the re-establishment of diplomatic relations, which I expect will be imminent.”

Obama had received a recommendation from the State Department late last week to take Cuba off the list, which still includes Iran, Sudan and Syria.

On December 17, Obama announced his decision to end an “outdated approach that, for decades, has failed to advance our interests, and instead we will begin to normalize relations between our two countries.” The Castro government had linked such an improvement to the removal of Cuba from the State Department list.

Congress now has forty-five days to decide whether to override the President’s decision to accept the official recommendation. However, lawmakers critical of Obama’s rapprochement with Cuba would need a veto-proof majority to do so, and they simply don’t have the numbers, said Schechter.

“Congress’ role is that if it doesn’t object, then it will deem to have been notified and the government in forty-six days will remove Cuba from the terrorist list,” he said. “I expect that to happen without any hiccup.”

Cuba was added to the list of terrorism sponsors in 1982, when it was supporting Marxist insurgencies in Colombia and elsewhere in Latin America.

Q: What is your reaction to President Obama’s decision to remove Cuba from the list of state sponsors of terrorism?

Schechter: It has been a long-awaited and expected move. It’s clearly something that was agreed to with President Castro at the meeting with President Obama in Panama last week. Clearly there was a choreography here that somehow impeded President Obama from being able to announce this while he was in Panama. But that’s OK. This will now open the door to the next step, which shall be the re-establishment of diplomatic relations, which I expect will be imminent.

The Cubans have been very clear that they want the process of taking Cuba off the terrorism list to initiate before the official diplomatic recognition and opening of embassies. The United States had agreed to that.

Congress has forty-five days to review the President’s decision. Then there will be an announcement to formally re-establish diplomatic relations. These two steps are the first formal and serious ones towards normalizing relations with Cuba. But that is only the beginning.

While Cuba is on the state sponsors of terrorism list, it has no access to international financial institutions or capital markets because no bank that deals with the United States will take the risk of dealing with Cuba. Eventual membership in the International Monetary Fund and access to development assistance through the World Bank will be instrumental in facilitating Cuba’s full integration into the international financial system and supporting a stronger economy in which Cubans can thrive and US businesses can invest. Their capital market access has been through Chinese or Russian banks that don’t have branches in the United States.

There are diplomatic benefits and then there are real-life benefits for Cuba that go beyond just the relationship with the United States.

Q: Congress has forty-five days to review the decision to take Cuba off the sponsors of terrorism list. Can critics in Congress block this? Do they have the numbers for a veto-proof majority?

Schechter: No. The expectation is that there will be members of Congress who will register some objections, but I would be very surprised if there would be a vote on this. Congress’ role is that if it doesn’t object, then it will deem to have been notified and the government in forty-six days will remove Cuba from the terrorist list. I expect that to happen without any hiccup.

Q: Is the Cuban government worried about Congress obstructing this effort to take it off the terrorist list?

Schechter: The Cubans have said that they will be satisfied with the President sending the notification to Congress. That would be enough for them to agree to formally re-establish diplomatic relations. The administration has given the Cubans sufficient assurances that Congress will not reject that effort.

Q: Once the two countries re-establish diplomatic relations, how quickly can we expect things to move?

Schechter: The first importance is political. With the removal of Cuba from the terrorism list, the United States will for the very first time get out of the way on Cuba issues. It is no longer the uninvited guest to any conversation on Cuba. A political scientist from Buenos Aires could call up his colleague in Mexico and have a conversation about Cuba and they will not have to mention the United States because there will no longer be this straw man that Cuba has used for fifty years for everything that is wrong on the island. The years of having the United States be Cuba’s red herring are over. That is, in a way, the political genius of President Obama’s announcement.

The second ramification for Cuba is the access to non-US capital markets and the beginnings of conversations of access to international financial institutions.

Q. How will the Castro regime react if Cubans don’t see an improvement in their lives and the government can no longer blame the United States for the island’s problems?

Schechter: Cuba will need to open to investment and greater access to information technology. Right now, Cuba’s Internet penetration rate is 5 percent — equivalent to that of Bhutan. When that changes, the thought is that there will be more and more pressure on the Cuban government to deliver the benefits and goods that other Latin Americans enjoy all the time. A new poll showed 54 percent of Cubans want an improvement in their economy. There is increasing pressure on the government to be able to deliver economic goods, which so far it hasn’t done.

Image: US President Barack Obama shakes hands with Cuba's President Raúl Castro as they hold a bilateral meeting during the Summit of the Americas in Panama City April 11. (Reuters/Jonathan Ernst)