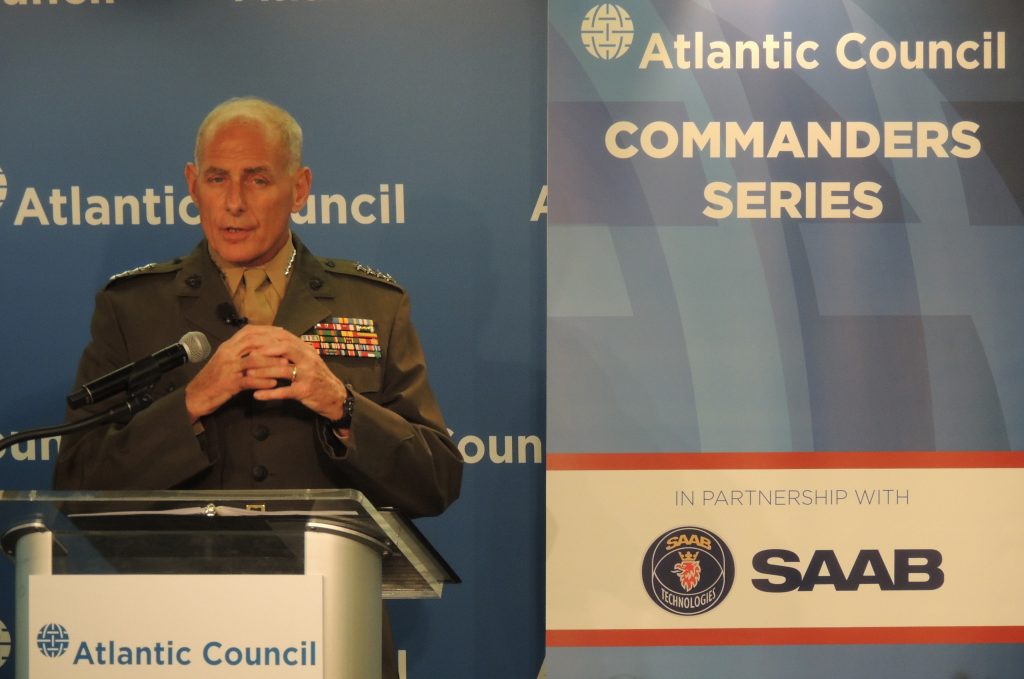 Illegal trafficking networks pose not just a security threat, they also have corrosive effects on governance and the rule of law countries in which they operate. In fact, cocaine-related corruption is a significant problem in the police and judiciaries in Central America, Kelly said at the Atlantic Council May 19.

“The reason these countries have these problems is because of drug consumption in the United States,” he said. In every drug deal “there are hundreds of people who have lost their lives in the process of that cocaine being … dealt into the United States.”

“I don’t believe there is any such thing as a violence-free drug deal,” he added.

Kelly spoke as part of the “Commanders Series” jointly hosted by the Atlantic Council’s Brent Scowcroft Center on International Security and Saab North America. Following his remarks, he participated in a discussion moderated by Kate Brannen, a Nonresident Senior Fellow at the Scowcroft Center.

Peru, Bolivia, and Colombia are the world’s top three producers of cocaine, respectively. Ninety-five percent of the cocaine consumed in the United States comes from Colombia.

Describing drug use in the United States as an epidemic, Kelly said that in Washington, for example, significantly cheaper heroin has replaced OxyContin as the drug of choice.

“Where we used to see heroin primarily in the inner cities, working-class neighborhoods, we are seeing [it] now in Capitol Hill, Beacon Hill, Nob Hill, and … Stanford University, Harvard University, Hollywood,” he added.

Sophisticated and exceedingly wealthy criminal corporations transport their illegal contraband, that includes drugs; military-grade weapons; gold; and humans, often young boys who are used as sex slaves, “with an efficiency and gross profit that FedEx would envy,” said Kelly.

“For a price, they can and do move anything and anyone along these routes. Today it is heroin and coke and people, but one day, God forbid, it could be terrorists to do us harm,” he added.

However, Kelly described the prospect of terrorists using the network as only a potential threat.

Amid all this grim news, Kelly described Colombia as a “miracle country.”

In the past two decades, Colombia has returned from the being on the brink of becoming a failed narcostate mostly due to Plan Colombia, a US-backed initiative aimed at combating drug cartels. The Colombians financed most of the initiative themselves.

Plan Colombia “is an amazing story of success,” said Kelly.

Physical eradication of the illegal coca plants is a dangerous task because of the prevalence of landmines in the region.

The flights that carry drugs out of Latin America originate, almost exclusively, in Venezuela. These planes used to fly to Honduras, but that has changed as a result of a crackdown by the Honduran government. Venezuela, too, has been shooting down drug flights.

“These guys like profit, but they are not suicide guys. So the number of drug flights are down,” said Kelly.

Meanwhile, efforts in the United States to legalize marijuana have officials in Latin America scratching their heads.

“They are perplexed over why we encourage them … to do something about the drug problem, but we don’t seem to be willing to do it as well,” said Kelly.

Kelly described Latin America as a great news story, but a region that is not a top national security priority for the United States.

China, meanwhile, has made significant inroads across Latin America.

“People in [Washington] wonder what we can do about the Chinese activity in Latin America,” said Kelly, adding, Latin America sees its relationship with China as purely business.

Most Latin American countries would prefer to deal with the United States as equal partners, but it is just “sometimes hard to deal with us, particularly on military sales,” he added.

Image: In every drug deal “there are hundreds of people who have lost their lives in the process of that cocaine being … dealt into the United States,” Marine Corps Gen John F. Kelly, Commander of US Southern Command, said at the Atlantic Council May 19.