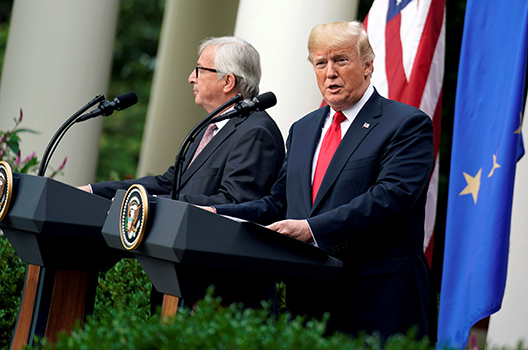 Since the July 2018 agreement between US President Donald J. Trump and European Commission President Jean-Claude Juncker to start trade negotiations, US Trade Representative Robert Lighthizer and European Commission Trade Commissioner Cecilia Malmström have met five times—most recently on March 6. They have yet to agree on the issues to negotiate. The European Union wants to discuss only tariffs on industrial goods and easing assessment of conformity with technical standards; the United States insists that agriculture must be on the agenda.

Beyond the lack of an agreed upon agenda and, in particular, the difficulties of dealing with agricultural issues, the differences between the United States and the EU on the governance process and approach to trade makes speedy progress in the trade talks unlikely. Meanwhile, the clock is ticking: Trump has until May 18 to impose tariffs—probably at 25 percent—on US imports of cars and car parts. A Department of Commerce report, released on February 18, was reportedly supportive of a conclusion that car imports threaten US national security. The EU—having protested against negotiating under threats of tariffs—has promised to retaliate and cease all talks if the United States imposes tariffs. Expect more fireworks as we approach May 18.

Despite areas of common interest—such as dealing with the unfair economic practices of China and the mutual benefits of eliminating tariff and non-tariff trade barriers—there are a wide range of trade-related grievances between the United States and the EU. Unfortunately, these grievances have tended to dominate discussions, making for a difficult negotiation.

Clearly, a goal of the United States in the upcoming trade talks is to sharply reduce, if not eliminate, this deficit. But the EU cannot single-handedly satisfy Washington’s goal: it can agree to cut tariffs and non-tariff barriers, but the decisions to purchase US goods lie with countless number of European businesses and consumers. Basically, the EU is not in a position to promise anything similar to China’s pledge to “purchase $1.2 trillion of US goods over the next six years.”

More important is the EU’s insistence on excluding agriculture in the talks. Inclusion of agriculture would open up a whole range of contentious and sensitive issues, including the EU ban on US products containing genetically modified organisms (GMOs), chlorine-cleaned chickens, and hormone-boosted beef; farm subsidies in the EU Common Agricultural Policy (CAP); government procurement; and the system of geographical identifications, which restrict the use of common terms like feta cheese or champagne to producers in those specific European regions.

Also potentially controversial are the US wishes to have “a mechanism to ensure transparency and take appropriate actions if the EU negotiates a free trade agreement with a non-market economy [i.e. China—this is a softer version of Article 32.10 of the US-Mexico-Canada (USMCA) trade agreement]; free cross-border data flows and no requirements of local computing facilities; and excluding sub-federal governments from the coverage of government procurement negotiations.

Additionally, two other non-trade disagreements could complicate the negotiations and eventually, the ratification process: the US withdrawal from the Iran nuclear deal, formally known as the Joint Comprehensive Plan of Action (JCPOA) and reimposing sanctions on Iran (especially the US willingness to impose secondary sanctions on foreign entities); and the US withdrawal from the Paris climate agreement (French President Emmanuel Macron has said that he will not sign a trade agreement with a country that is outside the Paris agreement).

Differences in Governance and Approach

Equally importantly, fundamental differences in governance and approach to trade would make it difficult to overcome the substantive disagreements. As a pseudo-supranational entity but relying on inter-governmental negotiations for key decisions, the process of obtaining negotiating mandates and eventually ratifying any agreement for the EU is cumbersome and time-consuming. On January 18, the European Commission unveiled its draft negotiating directives which went through debate and endorsement by the International Trade Committee of the European Parliament. The full European Parliament, however, has just rejected the motion to endorse the Commission draft directives. While Parliament’s recommendations are not binding on the European Council (made up by heads of states or governments), a negative vote could complicate the Council’s decision to approve the negotiating mandates when it meets on March 21-22. Adding to the uncertainty, several EU member countries, including France and Belgium, have expressed a desire to move cautiously on sensitive trade negotiations ahead of the crucial European parliamentary elections from May 23 to 26. Meanwhile, the May 18 deadline for Trump to impose tariffs on cars and car parts is looming.

More important than the time pressure is the inflexibility of the EU process: when approved, the mandates allow Malmström to engage the United States on only two issues—reducing tariffs on industrial goods and easing conformity assessment. If the United States insists on including agriculture on the agenda, then there won’t be any trade negotiation. Even if the EU wants to accede to the US demand, it has to go through the whole process again—but with more disagreement among EU members given their voters’ strong resistance to changes in agricultural policies.

Last but not least, the EU approach to trade is to only agree on rules and dispute settlement mechanisms and let private sector businesses and consumers make their own commercial decisions—basically the essence of the WTO rules-based global trading system. The Trump administration, on the other hand, focuses on outcomes, such as closing its trade deficit; obtaining favorable results from the WTO Appellate Body; and opening access to its producers. Such differences will not help.

Even before it officially starts, the US-EU trade negotiation has already hit a roadblock—over the agenda. At present, it seems equally unlikely that the United States will agree to discuss only industrial goods or the EU agrees to include agriculture. And even if the second scenario materializes, it will take time for the EU to approve new mandates and more time and effort to actually negotiate agricultural issues with the United States. History has shown how intractable these issues are. Meanwhile, existing irritants such as the Iran sanctions and the Paris climate agreement, and possible new ones, for example, the fact that more EU countries, including Germany and the United Kingdom, have begun to deviate from the US effort to ban the Chinese telecom giant Huawei, will test the traditionally strong US-EU relationship to the utmost.

Hung Tran is a nonresident senior fellow at the Atlantic Council and former executive managing director of the International Institute of Finance.