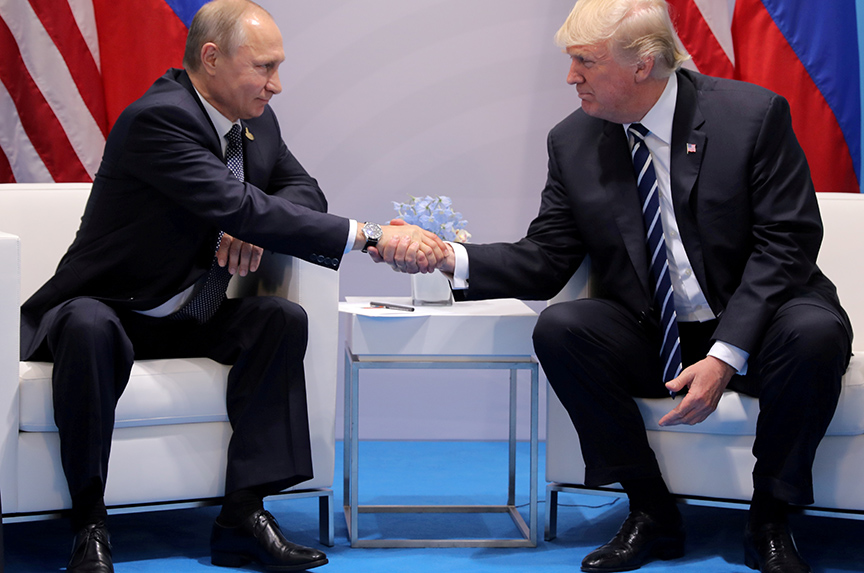 US President Donald J. Trump’s administration on March 15 announced new sanctions on Russian individuals and organizations in response to Russian meddling in the 2016 US election and cyberattacks, including attempts to the hack the US energy grid.

This is the most significant action by the Trump administration against Russia to date.

The sanctions target many of the same individuals and entities indicted by special prosecutor Robert S. Mueller III in February.

Michael Carpenter, nonresident senior fellow with the Atlantic Council’s Eurasia Center. He is also senior director of the Biden Center for Diplomacy and Global Engagement at the University of Pennsylvania.  Carpenter is a former deputy assistant secretary of defense with responsibility for Russia, Ukraine, Eurasia, the Balkans, and Conventional Arms Control.

“These new sanctions are totally inconsequential. The previous administration had already sanctioned most of the entities and individuals designated today, so there’s really nothing new here.

“Furthermore, such narrowly targeted sanctions have little to no impact on the operations of Russia’s intelligence services or its proxies, since these organizations don’t transact (at least overtly) through the US financial system.

“Finally, they have no impact on Russia’s economy at all.

“I suspect the Trump administration will cite these designations as evidence that it is getting ‘tough’ on Russia, but in this case it’s all smoke and mirrors.”

Evelyn Farkas, nonresident senior fellow in the Atlantic Council’s Future Europe Initiative, Eurasia Center, and Scowcroft Center for Strategy and Security. She served from 2012 to 2015 as deputy assistant secretary of defense for Russia/Ukraine/Eurasia, responsible for policy toward Russia, the Black Sea, Balkans, and Caucasus regions and conventional arms control.

“This is a great first step, and the timing and reference to the Russian chemical attacks on the United Kingdom are also positive. However, this is not sufficient in response to the Kremlin’s attack on our elections, various assaults on NATO nations and other democracies, use of chemical weapons in the United Kingdom, and targeted bombing of civilians in Syria (and attempts to paper over Assad’s use of chemical warfare).

“It is also insufficient to stop the Kremlin in its attacks on the United States and our allies.  We should join with the UK and call for Article 4 consultations at NATO and we should draw up more sanctions against Russia in coordination with the European Union.

“I agree with the US Ambassador to the United Nations Nikki Haley—if we don’t take immediate concrete action, [Russian President Vladimir] Putin and his government will not stop.”

Brian O’Toole, nonresident senior fellow with the Atlantic Council’s Global Business and Economics Program. He worked at the US Department of the Treasury from 2009 to 2017. As a senior adviser to the director of the Office of Foreign Assets Control (OFAC) he played a central role in designing the US sanctions regime in response to Russia’s aggression in Ukraine and negotiating the multilateral sanctions imposed by the European Union and G7 in coordination with the United States.

“As the first action targeting Russian election interference and hacking under this administration, today’s sanctions are significant.  Furthermore, they are technically competent and well-executed.  But by not hitting Putin closer to his power structures and not being coordinated with allies, especially the UK, they feel like they’re missing the real force needed to get Putin’s attention and cause him to think twice about interfering in November.

“The most notable piece of today’s action are the sanctions imposed for the ‘Not Petya’ cyber attack, which caused significant financial damage.  The others were sanctions cleanup: targeting those indicted by the special counsel or redesignating targets that had been sanctioned under the Obama administration.  Under normal circumstances, especially as an implicit acknowledgment of Russian electoral hacking, this would be a very solid action.

“But I can’t help but feel as if the United States has missed an opportunity to either have more significant sanctions targeting Putin’s soft spots (the Kremlin report names) and/or coordinated action with our allies; after all, Not Petya’s primary harm was to the UK.  Coordinated action with the UK, especially in the wake of the Skripal assassination attempt, would have sent a much stronger message to Moscow.

“This was a perfectly fine sanctions action, but with the threat from Russia only increasing as we get closer to November, it seems like perfectly fine does not provide the powerful impact necessary to deter Putin and his regime.”

John E. Herbst, director of the Atlantic Council’s Eurasia Center. He served as the US ambassador to Ukraine from 2003 to 2006.

“The sanctions are a step in the right direction, but not a large step.  The measure adds CAATSA [Countering America’s Adversaries Through Sanctions Act] sanctions to people already under sanction and applies sanctions to those indicted by Robert Mueller.  My sense is that Congress was looking for more robust sanctions.”

Anders Åslund, resident senior fellow in the Atlantic Council’s Eurasia Center. He is a leading specialist on economic policy in Russia, Ukraine, and Eastern Europe.

“The new round of US sanctions on Russia consists of two batches. The first one contains fourteen names, which correspond to Special Counsel Robert Mueller’s recent indictment of the St. Petersburg troll farm and its leading staff.

“The second batch sanctions the two Russian intelligence agencies FSB and GRU for their hacking of the US elections together with four leading hackers. These were already sanctioned and this is only a legal change to sanction them under the new CAATSA of August 2, 2017. Nobody has been sanctioned as yet from the classified Kremlin List (CAATSA Section 241), as Under Secretary of Treasury Sigal Mandelker indicated would happen when speaking at the Atlantic Council on March 9.

“It is noteworthy that the United States issues these new sanctions four days before the Russian presidential elections.”