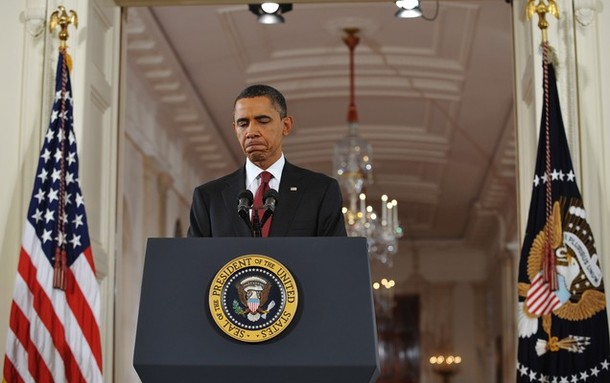 To the extent that the story was covered at all, it was mostly straight reporting of a changed domestic political landscape. Indeed, most of the reporting was little different from that in the American press. See, for example, Guardian’s "US midterm election results herald new political era as Republicans take House" and "The Tea Party has just begun" or Deutsche Welle’s "Opinion: US election outcome expresses country’s dissatisfaction" or BBC’s "How will House Republicans wield their power?"

But there was some treatment of what impact the Republican tsunami will have on America’s foreign policy.

Peoples and governments around the world might think that if he cannot impress his own people, then he cannot impress them either. His reception at the G20 meeting in South Korea next week will be watched closely.

Foreign policy played almost no role in these elections and little immediate change is expected, though some big decisions lie ahead.

In Afghanistan – how fast should Mr Obama withdraw troops? In the Middle East – does he give up on peace talks? These results have not weakened backing for Israel in the US Congress, and its supporters will not want the administration to exert undue pressure on it.

However, the American economic weakness that largely caused these election results might encourage Mr Obama to be more active in world economic affairs – stepping up criticism of China over its currency, for example.

While concerns over a "weakened" president are understandable, they’re mostly silly.  But Reynolds is right in thinking Obama will feel more pressure from Congress on a handful of issues now.  Moreover, since he’s unlikely to be able to make major inroads in domestic policy with Republicans blocking him, the natural move would be to spend more time on foreign affairs, where he has relatively higher autonomy.

One key result is that, while the Republicans swept the House of Representatives, the president’s fellow Democrats held on to the Senate, and this has important implications. It means there is still a chance of getting two key treaties ratified – the Senate has to approve all American treaties. The first is the new strategic arms treaty with Russia, known as New Start.

One piece of legislation which President Obama hoped for will take a tumble – a climate bill aimed at reducing carbon emissions by taxing them. Republicans will not have this.

It’s true that it will be harder  for Obama to get treaties ratified now.  But, considering that the Constitution requires a supermajority of 66 votes in the Senate to ratify a treaty and the Republicans already had enough votes to keep him below that threshold, it’s largely a moot point.

The German government’s Coordinator for German-American relations, Hans-Ulrich Klose, said Wednesday he expected Obama to turn his gaze outward in light of new difficulties in domestic politics. He told national radio station Deutschlandradio that the president would now be concentrating more on the Mideast conflict.  "I hesitate to speak of a solution to the problems, but it would be good if there were more intelligent conflict management," Klose said.

The chairman of the Bundestag parliament’s foreign affairs committee, Ruprecht Polenz, also stressed that Obama could maintain a strong role in international politics, as the president is only dependent on Congress in matters of international diplomacy when it comes to ratifying treaties.

However, Polenz took a different position from Klose’s, positing that conflicts within American politics could weaken the US’s leading position in worldwide diplomacy. "Of course, the US’s role in the world will be judged by its partners according to how strong they are at home. In that sense, [Obama] is somewhat weakened," Polenz told Deutsche Welle.

Polenz stressed that Germany and Europe would have to take a stronger position in global diplomacy if the US were to take a step back, especially in matters such as the Mideast conflict, Russian-American relations and China’s ascent to the world stage.  "We need solutions to certain conflicts and problems in this world, and if the Americans can’t focus on that as strongly as in the past, then Europe will have to do more," he said, adding, "We don’t have an eternity to answer as many foreign-policy questions as possible with one voice and act accordingly." "One message of this election is that we are now being put more to the challenge," Polenz added.

The big question facing American politics is whether Democrats and Republicans can work together, or if increased control by the opposition Republicans will mean a political stalemate. Polenz believes a standstill would be "fatal" for the US both at home and abroad.

Of one thing we can be certain:  The United States will maintain an active agenda on the world stage.  That’s been the case for a century now and, if anything, the Republicans will demand a more muscular policy.

Finally, from Monday’s Hurriyet, "Key Turkish issues at play in US elections."

Though Obama’s administration has expressed confidence about its continued relationship with Turkey’s newly energized ruling party, many lawmakers in the restless Congress seek retaliation against Turkey for Ankara’s improved ties with Iran and worsened relations with Israel.

The first major test in the post-election period will come at a NATO leaders’ summit in Lisbon on Nov. 19 and 20, when the alliance will seek to endorse a common position on a U.S.-proposed missile shield to protect NATO members from ballistic threats from rogue states. Washington seeks to deploy the system’s special X-band detection radars on Turkish soil, an issue that has added further tension to the already stressed relationship between the two allies.

Whether or not Turkey endorses the missile-defense project will be of key importance for its relations with Washington and the rest of the West. One danger for Turkey is a vote on a resolution recognizing Armenian claims of genocide that the House Foreign Affairs Committee narrowly approved in March. The Obama administration has thus far stood firm in its opposition to the bill, but U.S. Armenians seek a full House vote on the resolution during the "lame-duck" session that will follow Tuesday’s election.

The pending lame-duck session of Congress may also affect the position of U.S. ambassador in Ankara, a post that has remained empty for more than three months.  The last ambassador to Ankara, James Jeffrey, now is ambassador to Baghdad, and his presumed successor, Frank Ricciardone, has thus far failed to win Senate confirmation, with prominent Republican Senator Sam Brownback effectively blocking his appointment.

If Brownback lifts his veto – and there has been no sign of that so far – Ricciardone could be confirmed in the Senate’s lame-duck sessions, which are scheduled to begin Nov. 15. If Brownback refuses to change his stance, however, or if the lame-duck Senate fails to vote on the appointment, the post of ambassador to Ankara would remain vacant at least until the new Congress convenes in January. Alternatively, Obama might withdraw Ricciardone’s nomination and propose someone else to this post.

On that last score, at least, Turkey is in for some relief:  Brownback has been elected governor of Kansas and will presumably not bother returning to Washington for a lame duck session.

As to the X-band radar issue, it’s one where the president has a relatively free hand.  Republicans are likely to favor doing it but unlikely to force his hand on the issue.

But both the genocide resolution and a tougher line on Iran are more likely under a Republican House and more influential Republican caucus in the Senate.

Yesterday’s elections weren’t about foreign policy.  But they’ll have a modest influence beyond the water’s edge just the same.