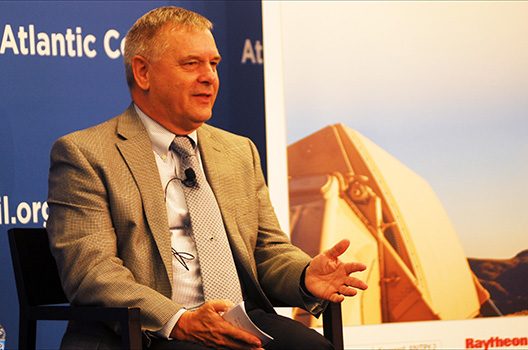 Growing technological sophistication by countries and terrorist groups hostile to the United States are forcing the Pentagon to change long-held views about missile defense, said Gen. James E. Cartwright, Former Vice Chairman of the US Joint Chiefs of Staff.

“The landscape has changed from pure ballistic activity to one that is far more difficult and far more precise. Therefore, the threat has increased,” Cartwright warned June 25 in a speech kicking off the Atlantic Council’s conference, “The United States and Global Missile Defense 2015.”

Cartwright, who retired from the US Marine Corps in 2011 after a forty-year career, now holds the Harold Brown Chair in Defense Policy Studies at the Washington-based Center for Strategic and International Studies.

“From tactical to strategic, we have to worry about it all,” he said. “You may have to worry about rockets and decide that, even though the rocket costs less than $20, you’ll use something like Iron Dome to go after it because you have to protect your population. It has become a political imperative. You cannot sit on your hands.”

The event was moderated by Barry Pavel, Director of the Atlantic Council’s Brent Scowcroft Center on International Security, which organized the all-day conference in partnership with defense contractor Raytheon.

“If you go back to the 1990s and early 2000s, the bulk of what we were trying to deal with were ballistic trajectories,” he said. “That level of expertise by a nation-state is still out there in some countries, but now you’re starting to deal with precision maneuvering activities, mobility on the ground and mobility on the targeting that are fundamentally changing the game on how we go after these capabilities.”

More countries are thinking along the lines of overwhelming enemy defenses, he warned.

“Whether the press believes it or not, you have to take it into calculation. Missile defense has become a key element in deterrence, and for the US an extended deterrence. That’s a concept we haven’t yet fully embraced,” he said, adding that the more people who work on these systems, the more sophisticated they become in their ability to defeat capabilities on the other side.

“Between the Bush administration and the Obama administration is a transition from strategic missile defense to regional constructs,” explained Cartwright, who attended the University of Iowa, joined the Marines in 1971, and eventually led the US Strategic Command before his appointment as the nation’s eighth Vice Chairman of the Joint Chiefs of Staff. “The attributes you’re looking for are pacing the threat and having something that actually addresses the threat that’s there.”

Yet because regional defense structures are so expensive, he said, no one country can completely afford them.

“These architectures endear alliances, and they make allies among people who have historically not been close allies. You see that in the Middle East, and you see that in the Pacific,” he said. “This concept of extended deterrence has only been about nukes, and it’s time to set that aside.”

Cartwright added: “Russia’s very concerned about the technologies associated with missile defense, and what it does to strategic balance in the world. If you’re using Iron Dome to shoot rockets that cost pennies on the dollar, you’re going to run out of resources at some point.”

Historically, the four-star general noted, successive US administrations “significantly downplayed” the defensive side of the equation throughout most of the Cold War.

“It was all about offense, and President [Ronald] Reagan had this vision of a different balance of offense and defense, and the ability to build it on a global scale,” he said. “Today, regional has emerged as a more practical approach than global. Capabilities are so different that they have to be tailored at a regional level.”

And even though “none of these technologies are ready for prime time,” he said, “they all have realistic, substantial upside potential. Some of them are limited by computational power, but significant breakthroughs are occurring on a regular basis.”

These include truck-mounted lasers, drone swarms, railguns, electronic jamming and cyberattacks, to name a few.

“Right now, cyber has the power and the capacity to undermine confidence. It’s not to take down the entire electric grid or the banking system,” he said “If I make one or two of those fail locally, it will significantly hurt the confidence in those who govern us. And if you look at the Arab Spring, the ability to use that cyber domain to influence people has been significant.”

Cartwright added: “Cyber hasn’t yet moving into the destructive phase, where people are killed. That will be a big step, but like the railgun, it’s found a niche, and its niche is undermining the congruence of governments and monetary systems.”