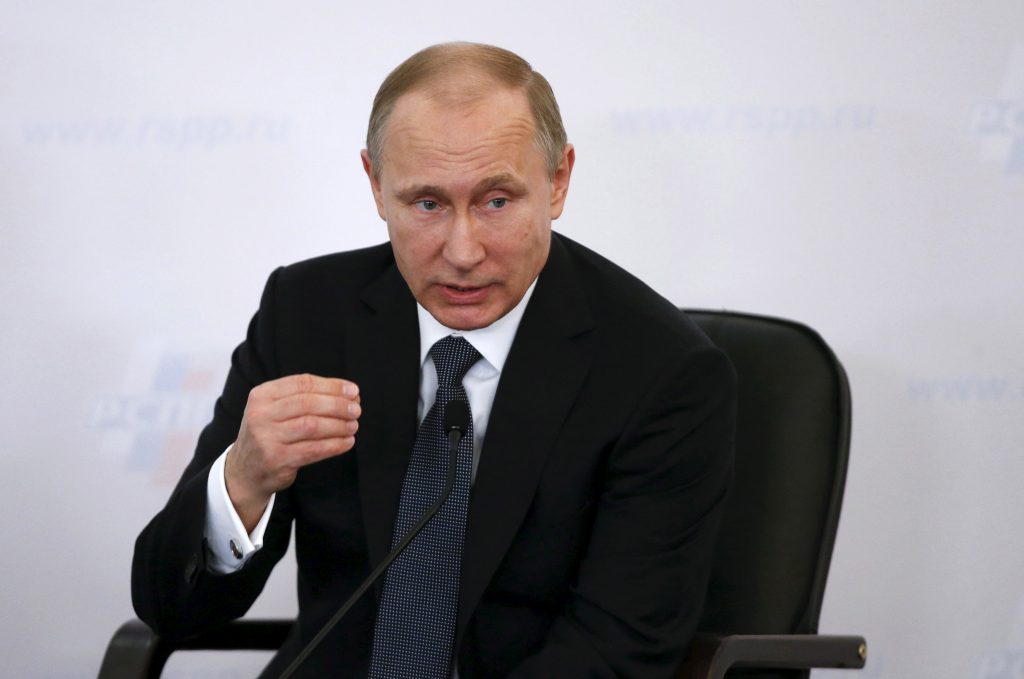 Former acting director of the Central Intelligence Agency, Michael Morell, on Russia, Donald Trump, and the US intelligence community

There are huge national security implications of Russia’s meddling in the US presidential elections, which is why the Obama administration must deliver an overt response that is painful to Russian President Vladimir Putin, said Michael Morell, a former acting director of the Central Intelligence Agency.

“In order for a US response to actually result in deterrence two things have to be true—one, it has got to be overt, it has got to be seen, and two, it has got to be painful to Putin,” said Morell, who is an Atlantic Council board member. Delivering that response is the responsibility of the Obama administration because the meddling happened on its watch, he added.

On December 9, The Washington Post reported a secret Central Intelligence Agency (CIA) assessment that Russia had interfered in the US election to help Donald Trump win the presidency. While the Post report was based on a leak, the Obama administration had in October publicly accused Russia of interfering in the presidential election by carrying out cyberattacks.

“Is it possible that the Russians actually affected the outcome of this election? Yes, because the number of votes that Donald Trump won by in those three critical states was so small,” said Morell. He said, however, that from a public policy perspective “that’s not where the focus should be because it is not provable.”

What does Putin gain from Trump’s victory?

“[M]y sense is that [Putin] believes that he can manipulate Donald Trump,” said Morell.

Michael Morell spoke in a phone interview with the New Atlanticist’s Ashish Kumar Sen. Here are excerpts from our interview.

Q: Do you believe Russia has influenced the outcome of the election?

Morell: It is important to step back and think about what is it that we know and what is it that we are less certain of. We know that the US intelligence community (IC) in October came together with the judgment that the Russians were interfering in our election and that the knowledge of that, if not the direction of that, came from the highest levels of the Russian government. That that was an IC-wide judgment that was shared officially—in writing—with the American people. We know that they believed that for sure.

Now just because they believe it doesn’t mean it is right, but in my experience our computer forensics are so good that we can almost always track back to the origin [of] any hack that occurs. I am pretty confident in the judgment that the Russians were interfering—hacking into [Democratic National Committee] (DNC) e-mails, hacking into [Clinton campaign chairman John] Podesta’s emails, and then dumping out ones that were embarrassing to [Hillary Clinton]. That’s one thing we know.

The second thing is we know that somebody in the United States government—whether it is in the intelligence community, elsewhere in the executive branch, or in Congress—is leaking a CIA judgment about what the intent was here; that the intent was actually to help Donald Trump and hurt Hillary Clinton. We don’t know for sure that that is the CIA judgment because no official has said anything publicly. We can’t be 100 percent sure that that is the CIA judgment. I assume it is. So many people now have spoken about it off the record that I think it probably is the judgment. I have actually believed all along that [Russian President Vladimir] Putin had a preferred candidate and he was working on behalf of that preferred candidate.

The third piece is all the work done by private cyber companies that show that the depth of the Russian involvement in the election may be broader than just hacking the DNC and John Podesta’s e-mails; it may go to a much broader and deeper information operation in terms of pushing out hundreds of thousands of Twitter posts, spreading of false news.

Did it affect the outcome? We will never know. It is impossible to answer that question. We don’t know whether it changed a single vote let alone enough votes to make a difference. Is it possible that the Russians actually affected the outcome of this election? Yes, because the number of votes that Donald Trump won by in those three critical states was so small. So, it is certainly possible, but that is an unanswerable question and I actually think that from a public policy perspective that’s not where the focus should be because it is not provable.

Q: What are the national security implications of Russian meddling?

I am shocked that after the [Director of National Intelligence] came out and said what he said in October that there wasn’t a bigger outcry from Congress, the executive branch, the media. People just kind of accepted it. After the election, the whole thing kind of went away and only came back when this new CIA judgment leaked.

There are two things we have to do in response. First, I am a huge supporter of a nonpartisan look into this. I would not have that commission look at the question of did it affect the outcome because then that becomes political and unanswerable. What I would have the commission focus on is: what did they do, how did they do it, and how can we put in place the proper mechanisms to make sure that if they try to do it again they won’t be able to succeed?

Number two, I believe strongly that we have to retaliate against Russia in order to deter not only Russia from ever trying to do this again, but to deter other countries who undoubtedly are watching all of this and looking at how we are going to respond so that they can make a judgment on whether they might be interested in doing this down the road; that would be China, Iran, and North Korea. You have to deter all of those countries. We have to push back pretty hard.

In order for a US response to actually result in deterrence two things have to be true—one, it has got to be overt, it has got to be seen, and two, it has got to be painful to Putin. That responsibility for responding to what the Russians did here is largely that of the Obama administration because it happened on their watch. I am a little concerned that the response is going to fall through the cracks of the transition, just the way the US response to the [USS] Cole bombing [on October 12, 2000] fell through the cracks of the transition between the Clinton administration and the Bush administration. We ended up not retaliating at all for al Qaeda’s attack on an American warship.

Q: Does Russia benefit from having Donald Trump in the White House?

Morell: I don’t have any access to intelligence, [but] my sense is that [Putin] believes that he can manipulate Donald Trump. My sense is that he already believes he has manipulated Donald Trump, not because he holds financial dealings or anything else over his head, but because Vladimir Putin as a former intelligence officer knows that when you have a narcissistic personality it is very, very easy to play to that person and get them to do what you want them to do simply by flattering them. That’s what Putin did and Trump responded.

Number one, Putin thinks that he can manipulate Trump. Two, Putin thought that Secretary Clinton would be very tough to deal with and, in a sense, he feared her because he held her responsible for the protests in the streets of Moscow after the parliamentary elections in 2011. He thought he could manipulate Trump and he feared Clinton. That’s why he had a preferred candidate.

Q: On the matter of Russian meddling, President-elect Trump has questioned the competence of the CIA. What are the implications of a trust gap between the president of the United States and the Intelligence Community?

Morell: The relationship between a president and the intelligence community, in general, and the CIA, in particular, is special. It is special because the intelligence community and the CIA are the only people to walk into the Oval Office without an agenda. They are just there to put the facts on the table and what they think about those facts. That is a very, very important service to a president who is constantly being bombarded by other people who are trying to convince him of things and are spinning the facts. To have the CIA and the intelligence community there to say, “This is the way we see it and we don’t really care about politics or policy,” is really important for the successful conducting of American foreign policy and American national security policy.

It is the responsibility of both the president and the intelligence community to nurture that special relationship. The president’s responsibility is to give them access—which Trump is not giving them given the number of briefings he’s gotten—to be open-minded and to listen, and create an environment where the Intelligence Community feels comfortable not only telling you what it thinks, but in particular telling you bad news, being able to say to you: “Mr. President, you are wrong about that. Let me tell you how we see it.” The president has got to create that environment.

What the Intelligence Community has to do is walk into [the Oval Office] with information that is really important to the president and is insightful and useful to him, but it also has to practice discretion. That means anything that gets discussed in that room has to stay in the room. Nobody walks out of the room and talks about the dynamics of what happened there.

After Mr. Trump got his first intelligence briefing when he became the Republican nominee, within a day or two there were leaks out of that briefing about how people behaved in that briefing. My read of those leaks, because they were not positive about the president-elect, is that those leaks must have come from the intelligence community. That should not happen. That probably got this whole thing off on the wrong foot.

There should also be no leaks about differences of judgment. If you walk in there and say, “Mr. President, here’s what we think” and the president says, “I really disagree with that” you can’t walk out of the door and leak that. That’s what somebody was doing here. I am not saying it was the Intelligence Community, it could have been somebody in the White House, it could have been somebody in Congress, but the fact that somebody leaked the CIA judgment was putting a finger in the president-elect’s eye. He didn’t react particularly well, but the leak should have never happened. In fact, the leaks were a felony.