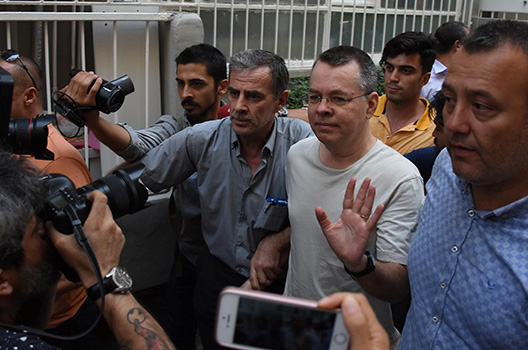 A Turkish court on October 12 freed from house arrest a US pastor whose case had severely strained ties between Washington and Ankara—NATO allies.

Pastor Andrew Brunson was arrested in 2016 and convicted on terrorism charges in relation with a coup attempt in Turkey on July 15, 2016. He was sentenced to three years in prison. Brunson has denied the charges.

The Turkish judge on October 12 reduced Brunson’s sentence to time served and lifted the house arrest to which the pastor was released in July following health concerns. Brunson is free to leave Turkey.

In a statement at the time, US Treasury Secretary Steven Mnuchin said: “Pastor Brunson’s unjust detention and continued prosecution by Turkish officials is simply unacceptable. President Trump has made it abundantly clear that the United States expects Turkey to release him immediately.”

Atlantic Council analysts had this to say about Brunson’s release:

“Andrew Brunson’s release from house arrest clears the way for full restoration of US-Turkey relations. It clears the way for the United States and Turkey to de-escalate bilateral tension and rebuild a sense of strategic partnership. This will hopefully include acceleration of on-the-ground military cooperation in Syria between US and Turkish troops as through eventual joint patrols to restore stability in the northern Syrian city of Manbij, with the United States removing from the city PKK [Kurdistan Workers’ Party] operatives, viewed by Turkey and many US officials as terrorists.

“These steps will help restore confidence in Turkey in a general sense, which will be important for stabilizing the country’s economic situation.”

Defne Arslan, director of the Atlantic Council in Turkey program.

“The release of Andrew Branson is an important milestone to restore the relationship between two historic allies. There are still pending issues between Turkey and the United States, however—I believe—this news will facilitate the tone on the remaining issues.  It is time to start rebuilding the strategic relationship.”

Image: U.S. pastor Andrew Brunson reacts as he arrives at his home after being released from the prison in Izmir, Turkey July 25, 2018. (Demiroren News Agency, DHA via REUTERS)