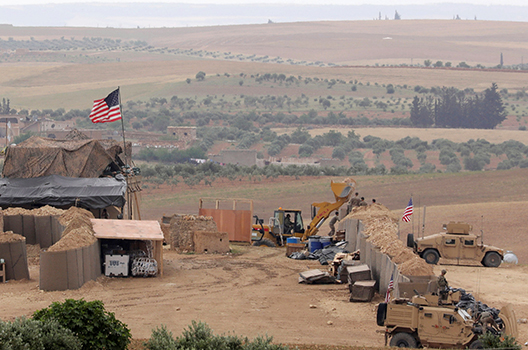 Media reports suggest that the Trump administration has begun planning the removal US armed forces from northeastern Syria, as US President Donald Trump believes “we have defeated ISIS in Syria.”

White House Press Secretary Sarah Huckabee Sanders said on December 19, “five years ago today, ISIS was very powerful and dangerous force in the Middle East, and now the United States has defeated the territorial caliphate…We have started returning United States troops home as we transition to the next phase of this campaign. The United States and our allies stand ready to re-engage at all levels to defend American interests whenever necessary.” According to Department of Defense sources, the United States has already informed some of its partners of its intention to remove its troops.

The potential withdrawal comes as threats of new violence in the northern part of Syria continue to rise. On December 17, Turkish President Recep Tayyip Erdoğan continued to warn that his forces would soon move to attack the Kurdish People’s Protection Units (YPG) and Syrian Democratic Forces (SDF), which Ankara considers terrorist organizations cooperating with the Kurdistan Workers Party (PKK) across the Turkey-Syria border. The United States has supported the SDF in the anti-ISIS campaign since late 2015.

US President Donald Trump held a phone call with Erdoğan on December 14 to try to head off a Turkish attack which could have put US troops in the cross-fire. During an event at the Atlantic Council on December 17, US Syria Envoy James Jeffrey downplayed US support for the Kurdish militias saying Washington’s support for the groups was for “a specific goal: which is the defeat of ISIS.” Jeffrey warned that Syrian Kurds should aim “to become part of the fabric of a changed Syrian society,” rather than pursue an independent state. The United States “does not have permanent relationships with substate entities,” Jeffrey added.

Late on December 18, the US Department of State also announced that it had approved a purchase by Turkey of 140 Patriot missiles and associated equipment. Turkish plans to purchase the S-400 defense missile system from Russia, a move heavily opposed by the United States, has placed further strain on a relationship already made tense by US support for the Syrian Kurds. Ankara had argued that it was left with no choice but to purchase the S-400 system, because Washington had refused to sell Turkey its own missiles. This December 18 approval could pave the way to resolve the row.

The prospect of renewed violence in northern Syria comes as a key peace proposal hit snags in Geneva on December 18. A joint proposal by Russia, Iran, and Turkey to create a new constitutional body for Syria has not yet materialized. Foreign ministers from the three countries had hoped to share a list of potential committee members to UN special envoy Staffan de Mistura this week before presenting to the UN Security Council on December 20. Russia, Iran, and Turkey hope to continue the talks on the committee in the new year.

Atlantic Council experts respond to the news that the United States is planning to withdraw from Syria:

William F. Wechsler, senior adviser for Middle East programs at the Atlantic Council and interim director of the Rafik Hariri Center for the Middle East. His previous posts include deputy assistant secretary of defense for special operations and combatting terrorism and deputy assistant secretary of defense for counternarcotics and global threats.

“We’re not going to leave as long as Iranian troops are outside Iranian borders, and that includes Iranian proxies and militias.’ This is what national security adviser John Bolton said in September, committing that US forces would stay in Syria as long as Iranian forces were in the country. On December 17 here at the Atlantic Council, US special representative for Syria James Jeffrey called again for the ouster of Iranian forces, thus suggesting that they have not yet left.  But not forty-eight hours later we learn that US forces are indeed preparing for a “full” and “rapid” withdrawal from Syria.

“The Kurds who have fought effectively alongside US forces against the Islamic State will feel betrayed, yet again, by the reversal in US policy. This too was foreshadowed by Jeffrey on Monday when he stated that “we don’t have permanent relations with sub-state entities.” We do, however, have permanent relations with states. And so yesterday the State Department notified Congress of another policy reversal, allowing Turkey to buy the Patriot missile defense system. This is an attempt to halt Turkey’s planned purchase of a competing Russian system. The near simultaneous timing of these two policy changes is undoubtedly not a coincidence and reflects a Trump administration conclusion that pulling Turkey back in the NATO orbit is more important than other US interests in northeast Syria.

“The future direction of Turkey certainly is important. And the Trump administration was always unconvincing when it argued that our military presence in northeast Syria had much to do with pushing back on Iran, which operates in other parts of the country. Furthermore our legal authority to stay in Syria, as specious as it is, rests entirely on the military campaign against the Islamic State. That campaign is not over, but it is winding down. So a move to reduce the US presence is neither surprising nor unwelcome. But if the past decade has taught us anything we should recognize that as long as legitimate Sunni grievances continue the threat of a resurgence of Salafi jihadist terrorist groups remains. It would be better to leave a small US special operations presence to continue to work with the Kurds to help hedge against this outcome. A full withdrawal sends the wrong signal, one that also will be heard by other counterterrorism partners far from Syria.”

Rachel Brandenburg, director of the Middle East Security Initiative at the Atlantic Council’s Scowcroft Center for Strategy and Security. She previously served as Iraq and Levant director in the Office of the Secretary of Defense for Middle East Policy.

“Immediate withdrawal of US forces from Syria would send a concerning signal to local and regional partners about our commitment not only to reaching a diplomatic settlement in Syria, but also to the administration’s stated approach to countering Iran in Syria and achieving the “enduring defeat” of ISIS.  Even a small US footprint in Syria has reassured some key partners that the United States remains concerned for their security, which I expect a rapid withdrawal would call into question.”

Faysal Itani, a resident senior fellow with the Atlantic Council’s Rafik Hariri Center for the Middle East. Follow him on Twitter @faysalitani.

“The US plan outlined by Ambassador James Jeffrey two days ago at the Atlantic Council always seemed out of step with the president’s instincts to disengage from Syria. This is not a surprising outcome.

The implications for the goals he outlined are profound. The anti-ISIS fight may actually be the least affected. ISIS was not going to disappear because of a counterterrorism operation and they will be back in some form anyway. We will lose any leverage we had against Assad or Iran – though I do not think it ever amounted to much without an offensive military mandate. I expect Turkish and Iranian land grabs would ensue if there were no US security guarantee to the Kurds.”

“At the regional level, the statement further damages Washington’s credibility, especially after statements by Brett McGurk and James Jeffrey regarding eradicating ISIS and containing Iran in Syria. Russia is the big winner because it is now perceived at the regional level by traditional US allies as the only viable international interlocutor.

“At the local level, withdrawal means the US has sold out on the Kurds, with a Turkish escalation in northern Syria. The Kurds have no other choice but to make a deal with Damascus. This is a big win for Assad, who will be able to reclaim some 25% of the territory remaining in the hands of the SDF.

“This will also have positive repercussions for ISIS that still operates in eastern Syria. By the US’ own admission, not enough fighters have been trained to stabilize the region after the victory against ISIS. The United States was aiming to train up to 40,000 local troops to fight ISIS, ensure stability, and help with diplomacy, Joint Chiefs Chairman Gen. Joseph Dunford recently said. Only 8000 have been trained so far.  The stabilization of the area is now doubtful.

“It is also a major win for Iran, which has been under threat of US containment in Syria. With the withdrawal,  Iran will be left to maintain freely its presence there and more specifically a land route connecting Tehran to Lebanon.

“Finally the US presence was perceived as a deterrent to the regime, and provides Washington leverage within the political process. An unconditional withdrawal means that the US will lose any leverage  it has to force any concessions from both Iran and Assad.”