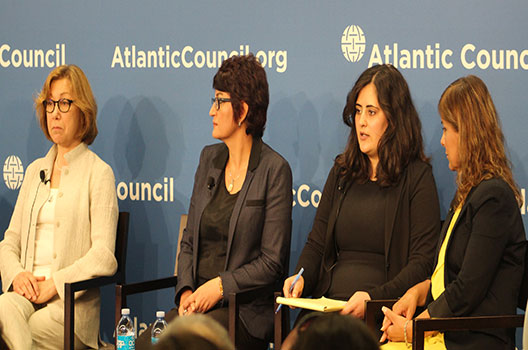 From left: Bassama Kodmani, a spokesperson for the Syrian High Negotiations Committee Negotiating Team, joins a panel with Alise Mofrej, a Syrian politician and a member of the Negotiations Committee, Shatha Hussein, an interpreter, and Seve Aydin-Izouli, a member of the Bar Association of Paris to discuss the conflict in Syria, now in its sixth year. (Atlantic Council/Deniz Citak)

Reports of newfound military cooperation between Russia and the United States to resolve Syrian conflict are welcomed with caution by Syrian negotiation committees.

“The hope is there may be serious cooperation at the highest level to finally address the Syrian situation in a serious way and at the level that is required,” said Bassama Kodmani, a spokesperson for the Syrian High Negotiations Committee Negotiating Team on July 14 in Washington.

“The news is bringing important developments, which we read with hope and concern at the same time,” she added.

US Secretary of State John Kerry traveled to Moscow on July 14. Reports indicate that his visit will focus on US-Russia cooperation to resolve the conflict in Syria—which is now in its sixth year. The proposed deal—released on July 13 by the Washington Post—would increase military cooperation between the United States and Russia in exchange for Syrian Air Force to ground its equipment.

There has been little cooperation between these two major powers since the conflict started in 2011. Since then, the United States and Russia have continually been at odds. The United States has backed opposition forces to Syrian President Bashar al Assad while Russia has supported Assad throughout the conflict.

Reports of increased cooperation between the United States and Russia also come amid claims that Russia hasn’t pressured Assad to resign.

There have been ceasefires negotiated in the past, but none have stuck. In April 2012, a United Nations mediated ceasefire was declared. The ceasefire collapsed almost immediately.

A ceasefire extended to certain parts of Syria was declared on February 26, which was implemented and endorsed by the UN via Security Council Resolution 2268. While that agreement still technically exists, it has broken down in practice.

“The problem has been one of a lack of a serious commitment from international actors and this deal would not be a guaranteed fix for that,” said Kodami.

“Is the United States with Russia agreeing on serious measures to ensure that the [Assad] regime will comply? […] Who is going to implement what is agreed?” she added.

The lack of compliance from Assad’s government with internationally-imposed mandates has defined ceasefire negotiations. Aid convoys have struggled to make their way to besieged areas and the shelling of such areas often immediately resumes after the convoys leave.

Compliance has also been an issue in discussing detainees of the conflict. Mofrej was detained by the Assad regime. Via translator, Mofrej discussed the various reports and papers that have been published by the UN about the detainee crisis in Syria—emphasizing the UN Commission of Inquiry report, which states that the “crimes being committed within the detention centers amount to war crimes and collective extermination.”

She continued: “It has been a practice used to terrorize and subjugate the Syrian people.”

While human rights violations have been a part of the negotiations, Mofrej noted that there has been little progress made in the way of reform.

With the UN-mediated talks between the regime and opposition now at a virtual standstill, many question what the opposition is doing to move forward. Kodmani believes that the current international political landscape around the conflict must change before Staffan de Mistura—the United Nations and Arab League Envoy to Syria—can resume negotiations between the parties.

De Mistura “needs some guarantees…that the pressure points are in Moscow and Washington, and he wants to see that something is given to him to make his mission possible…if he faces [another opposition walk out] it could be the end of the Geneva process,” said Kodami.

The July 14 meetings between the United States and Russia about resolving the Syrian conflict could act as a new jumping off point for the next round of negotiations in Geneva.

“If the agreement for the Russians and Americans to work together is connected to the political process” then there may be room for negotiation between the regime and opposition forces, said Kodami.

However, the opposition is seemingly willing to wait until a deal they can agree with is put forward.

“We’re seeing the risk of a bad agreement and honestly the opposition is saying […] we’d rather see a cessation of hostilities, […] and if there is no political agreement that is satisfactory with which we can live it is better not to have an agreement,” said Kodami.