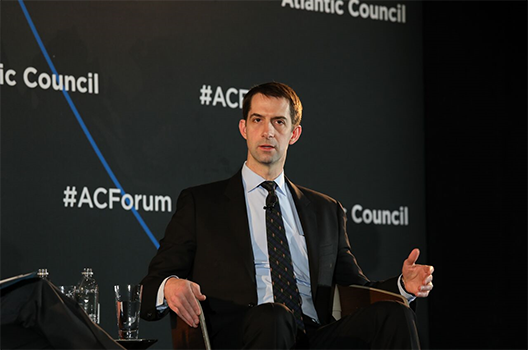 “One of the biggest advantages we have is that we have a lot of allies and friends,” US Sen. Tom Cotton (R-AR) said in a wide-ranging discussion on US foreign policy at the Atlantic Council’s Annual Forum in Washington on December 14.

Cotton, a member of the Senate Committee on Armed Services and a US Army veteran, spoke on the need for US leadership around the world to confront serious geopolitical challenges from authoritarian rivals such as China, Russia, Iran, and North Korea.

Asked by moderator Michael J. Morell, an Atlantic Council board member and former acting director of the Central Intelligence Agency, how political leaders can convince the American people of the importance of US global leadership, Cotton said simply “we don’t want to play home games.” The United States, throughout its history, Cotton explained, has been driven by “the fundamental strategic goal. . . to prevent attacks on our homeland and our people.”

By containing adversaries and cementing alliances, the United States can ensure that attacks on its own soil are next to impossible and can prevent devastating global wars by ensuring that aggression is stopped before it can expand, Cotton said. “Being seen as unreliable in small matters,” Cotton argued, “can very quickly lead to people thinking that it will happen in large matters as well.”

While Cotton was quick to point out that he believes “Russia is a declining power” that should not be inflated into a stronger power, he cautioned that it “remains the only country that can destroy our way of life, because of its legacy nuclear model and its crash nuclear modernization program.” He argued that it was vital the United States “impose a new set of boundaries on Russia. Boundaries in Ukraine, boundaries in the Baltics, boundaries when it came to the kind of meddling we saw in our 2016 campaigns. [We need to be] very precise and specific about things that we know they are doing and actions that we will take in response.”

Russian actions, like the recent seizure of Ukrainian vessels and sailors in the Kerch Strait, demonstrate that Russian President Vladimir Putin “acts the way weaker powers always do, they never go for the jugular in a stroke against their more powerful adversary. They always take incremental steps that are below the threshold below the level of retaliation,” said Cotton.

It is critical, however, that the United States does not “not turn a blind eye [to Putin’s actions] because it will encourage him to take a more aggressive and more destabilizing step in the future,” Cotton said. “If we were to allow Vladimir Putin to inch by inch by inch encroach [on his neighbors] . . . all we are doing is encouraging him to take ever bolder steps up to the doorstep of NATO.”

China, similarly, needs to be contained within its region, Cotton said. The United States has the upper hand in this fight, according to the senator, because “we have a lot of allies and friends” in the region who are turned off by Beijing’s aggression.

“I am not really aware of any country on the Chinese periphery that wants to be a vassal state to China. China approaches those countries in many ways on those terms,” Cotton said.

Cotton is encouraged that the United States now has “a more coherent China policy than we did two years [ago] and probably [than we have ever had] in modern times,” in part due to agreement “among Democrats and Republicans” in Congress that “China is a unique adversary in the world.”

Cotton expressed his support for the detention and potential extradition of Huawei Chief Financial Officer Meng Wanzhou in Canada on charges of attempting to evade US sanctions on Iran. Cotton pushed back, however, on comments from US President Donald J. Trump on December 11 that he could intervene in the case in return for Chinese trade concessions. “I would not offer to send her back to China or decline to press charges in return for trade agreements,” Cotton said. “It would send the wrong signal to [Chinese President] Xi Jinping, to our allies, and we can get good trade agreements without doing that.”

Cotton also expressed his displeasure with the Trump administration’s tactics in negotiations with North Korea over its nuclear program. He disagrees with efforts by the administration to use incentives—such as the summit between Trump and North Korean Leader Kim Jong-un in Singapore on June 12—to drive Pyongyang to the negotiating table. “I don’t think we should be giving them much of anything in return,” for progress on denuclearization, Cotton said.

He was particularly concerned about Trump’s decision to suspend US-South Korean military exercises this fall and the potential that they could also be cancelled in the spring, saying he would “not have suspended them and I would unsuspend them now.”  He cautioned that since Pyongyang has not made any substantial progress since the Trump-Kim summit the United States “ought not to allow North Korea to drag out these discussions indefinitely.”

While the administration continues to try to gain concessions from Kim, Cotton argued, “we ought to use the time that this is buying to fortify our defenses. To deploy more Patriot [missile] systems and Terminal High Altitude Area Defense [THAAD] systems and working on innovative defense systems.”

Cotton praised Trump’s Iran policy, however, saying “the steps we have taken over the last year are largely the correct steps.” A longtime critic of the Iran nuclear deal, Cotton is pleased that the administration withdrew from the pact and reimposed sanctions as the deal only “empowered Iran’s malevolent activities in the region.” If anything, Cotton said, he “might have been a little more aggressive on [limiting Iranian] oil sales with some of our allies. I would certainly be pushing them behind the scenes to get down to zero as quickly as possible.”

Cotton believes the US demands on Iran are ultimately fair and achievable. “We are not demanding they become Belgium or the Netherlands,” he explained. “We just want them to start acting like a normal nation state and not a revolutionary cause.”

The continued threat from Iran is one of the many reasons Cotton believes the United States should remain committed to a partnership with Saudi Arabia, despite the outcry over the murder of US-based Washington Post columnist Jamal Khashoggi. By maintaining a relationship with Riyadh, the United States is not “justify[ing] that terrible murder at all,” Cotton said, pointing out that “we have taken steps to hold those people accountable who were responsible for it by imposing sanctions and other punishments on them.”

Cotton said that—despite a unanimous December 13 Senate resolution that condemned Saudi Crown Prince Mohammed bin Salman as being responsible for Khashoggi’s murder—he believes all the people involved who need to be punished have been, unless “new evidence emerges.” While the murder was tragic, Cotton maintained that Washington should not abandon “an important partnership that we have had for seventy-five years across many different kinds of presidents and many different kinds of threats, at a time when Iran is the gravest threat that we face in the Middle East.”

Similarly, Cotton threw cold water on another December 13 resolution that called for an end to all US aid to Saudi and Emirati forces fighting in Yemen. Cotton described the motion as “unconstitutional,” and pointed out that the US House of Representatives will not pass it this session. He argued that withholding US information and aid would not end the conflict, but instead would make it more likely for the war to expand and would be more difficult to ensure that US allies act within general conflict parameters. According to Cotton, it would be “short-sighted to tell the Saudis and Emiratis the kind of information and intelligence to prevent civilian casualties and help them comply with the law of armed conflict.”