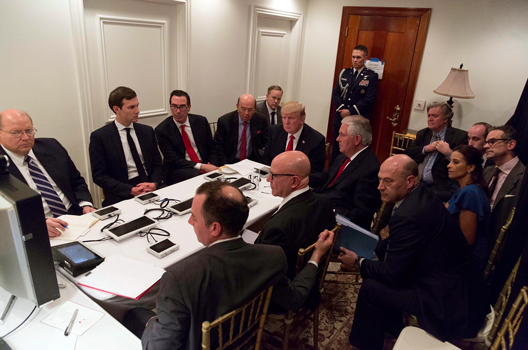 While Russia was “probably surprised” by the US missile strike on a Syrian air base, it is unlikely that the Kremlin will respond with escalatory force, according to a former deputy secretary general of NATO.

“They’re surprised, but I don’t necessarily think their reaction will be to escalate the situation,” said Alexander Vershbow, who now serves as a distinguish fellow at the Atlantic Council’s Brent Scowcroft Center on International Security. “The Russian reaction, while harsh in rhetoric… they’re going to try to draw a line around this incident,” he said.

“For the Russians, and I would hope for [Syrian President Bashar] Assad, they would not provoke an open-ended conflict with the United States,” said Vershbow. However, he said, this incident “might convince the Russians to reign in their client more effectively than they ever have.”

On April 6, US President Donald J. Trump announced that the United States had conducted a missile strike on the Syrian regime-held al-Sharyat airfield in retaliation for a chemical attack carried out on the town of Khan Sheikhoun on April 4, which killed nearly eighty civilians, many of them children, with a toxin called sarin gas.

Sarin gas is only available to the Assad regime, which has denied carrying out the attack. Russia has worked with and defended the regime since its entry into Syria’s civil war in 2015. The close ties between Syria and Russia have prompted the United States to investigate the potential of Russian involvement in the chemical attack.

Russian Prime Minister Dmitry Medvedev warned that the strike could fracture the already tense relationship between Washington and Moscow. In response to the incident, Russia reportedly threatened to shut down a deconfliction hotline, which is used to share intelligence between Russia and the United States on operations in Syria.

Although “clearly it complicates the bilateral relationship in the short term,” this situation “will not have irreversible effects on US-Russian relations,” Vershbow said.

Vershbow and Pavel joined Frederic C. Hof, director of the Atlantic Council’s Rafik Hariri Center for the Middle East, on a press call on April 7 to discuss the implications of the missile strike and its impact on US-Russia relations, as well as both countries’ roles in Syria.

While “the Trump administration proceeded with a very limited operation aimed at deterring further chemical weapons use by Assad,” according to Pavel, it raises questions about a changing US stance toward Syria.

“I believe in the context of Syria, the first priority of the Trump administration remains the defeat of the so-called Islamic State,” said Hof. “What’s changed is that… [Trump] came to the conclusion that Assad is an essential part of the problem he’s trying to solve.” Hof described how when Assad launches attacks on civilians, he creates recruits for the Islamic State of Iraq and al-Sham (ISIS) and al Qaeda.

“It should be out of the question” for the United States to accept Assad’s leadership, Vershbow insisted. Yet currently, the Trump administration is “saying Assad must go, but not having a clear path to get there,” he added.

Vershbow described how the “strikes were meant to be largely a political signal… but not the start of any campaign.” The administration has indicated the missile strikes were a one-off targeted deterrence to prevent more chemical attacks, not a move toward escalation.

According to Hof, this is not enough. The Assad regime launched a similar chemical weapons attack in 2013. Trump has criticized former US President Barack Obama for his failure to hold Assad to account for that incident. At the time, a multilateral coalition, led by the United States, worked to ensure the removal of all chemical weapons from regime territory; this latest attack proves that initiative was unsuccessful. In addition, while the regime had not conducted another chemical weapons attack, Assad, with help from Russia and Iran, targeted civilians in order to gain control of the formerly rebel-held city of Aleppo. Hof insisted the Trump administration must act in light of lessons learned.

“If this is a one-off [strike], you have the possibility of Bashar al-Assad renewing a civilian-centric mass homicide program using everything but chemical weapons,” Hof said.

“It’s quite possible that what Assad calculated is that the return to the use of sarin would give him the opportunity to short cut this process by introducing an element of sheer terror that he believed the West would not respond to,” according to Hof. “What [Assad] does is going to be governed by his perception of what he faces.”

“One night of air strikes doesn’t establish a track record, but it shows that this administration is ready to use force if lines are crossed,” according to Vershbow. However, he said that “the administration needs to think through what is that message [of the strikes], because without the ‘or else,’ it’s not much of a message.”

If the administration does not follow up this strike with decisive action, “this attack will go down in history as a particularly useless gesture,” according to Hof. He called for the new administration to move forward with a national security strategy for Syria. The Obama administration did not devise a strategy earlier in the conflict. “This time around, we have to contend with the fact that the Russians are there,” said Vershbow.

Hof said: “There should be some discussion about Russian willingness and ability to get their client out of this mass casualty business once and for all.” US Secretary of State Rex Tillerson will visit Moscow on April 11 at which time Russia’s role in Syria is likely to be discussed.

While Russia may have entered the conflict to stand against Western-driven regime change, according to Vershbow, the chemical weapons attack, and the US response, has forced the Kremlin to reassess its position in Syria. He said that if the Trump administration reassures Russia, but insists on the Kremlin taking a stance to hold Assad accountable, they could find “an outcome that could actually lead to some sort of solution.”

The United States will continue to investigate the potential of Russian involvement in the chemical attack, however, “it’s more likely that they didn’t know” that Assad retained stores of chemical weapons, according to Vershbow. “There’s even some limits in how far the Russians are prepared to go,” he said, adding, “they don’t want to precipitate deeper US involvement against Assad.”

Pavel described how the message sent by the US strike in Syria has resonated in other parts of the world. “The Chinese perceive this as very much directed toward North Korea, that we now have an administration that is willing to use force to defend red lines, [and] to advance its interests,” he said.

Chinese President Xi Jinping was visiting Trump for a summit in Mar-a-Lago, Florida, at the time of the missile strike. China has a policy of defending North Korea, in much the same way Russia defends the Syrian regime.

“Rogue state clients of major powers cannot be allowed to get away with reckless behavior to threaten their regions and US allies,” said Vershbow. “Perhaps this will increase the clarity of the message to China that they have to do more to reign in North Korea.”