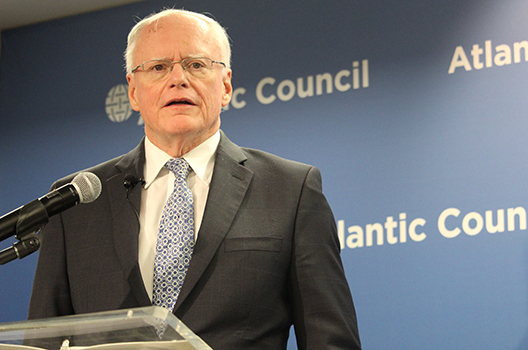 ‘We do not have permanent relationships with substate entities,’ says James Jeffrey

The eventual goal of the mainly-Kurdish Syrian Defense Forces (SDF) should be “to become part of the fabric of a changed Syrian society,” US Special Representative for Syria James Jeffrey said at the Atlantic Council in Washington on December 17. Distancing the United States from the prospect of supporting SDF or other Kurdish groups as autonomous from a future Syrian government, Jeffrey said “we do not have permanent relationships with substate entities. That is not the policy of this administration and has not been the policy of other administrations.”

The United States has provided support to the SDF and the Kurdish People’s Protection Units (YPG) since 2015, mainly to help the groups fight ISIS in northeast Syria. The cooperation has caused serious rifts with Turkey, which accuses Syrian Kurdish groups of collaborating with the Kurdistan Workers Party (PKK) terrorist group operating in southeastern Turkey. Jeffrey’s comments came as Turkish President Recep Tayyip Erdoğan signaled his armed forces could be preparing to launch a new offensive against the YPG in Syria in the coming days.

Jeffrey maintained that US support for SDF and YPG was for “a specific goal: which is the defeat of ISIS.” With ISIS mainly eradicated from Syria, Jeffrey’s comments could signal the Trump administration’s willingness to weaken its support for the Kurdish groups.

Jeffrey’s remarks mainly focused on the status of international peace talks to end the seven-year-old civil war in Syria. Talks between the main Syrian opposition parties, Bashar al-Assad’s government, and foreign governments have been ongoing for years, with little tangible progress. In January 2017, Syrian representatives from both sides began attending regular talks in Astana, Kazakhstan—the so-called Astana peace process—hosted by Russia, Iran, and Turkey. At the same time, the United Nations (UN) has led talks in Geneva.

A report is due to the United Nations this week on a Russian, Iranian, and Turkish proposal to create a Constitutional Committee to begin to lead the political transition in Syria. Jeffrey signaled US willingness to support a Constitutional Committee, as long as such a body would adequately represent opposition factions. The proposal, which emerged from the Astana process, was endorsed by the leaders of France, Germany, Turkey, and Russia during an October 27 summit, but there was no progress on the proposal during a November 28-29 Astana meeting between the government and opposition representatives.

Jeffrey reported that Russian, Iranian, and Turkish officials are submitting their list for the Constitutional Committee to UN Syria Envoy Staffan de Mistura this week, after which De Mistura will report to the UN Security Council on December 20 on whether he believes the list is acceptable. If the UN accepts the list, “we believe that there is a chance that we can see a breakthrough,” Jeffrey said, but he cautioned “right now we are not there.” According to Jeffrey, Syrian opposition leaders are not yet satisfied with the Constitutional Committee list produced by Russia, Iran, and Turkey.

Jeffrey said that an acceptable Constitutional Committee could play a critical role in making the collection of ceasefires around the country more permanent. The signal that Syria is moving toward a permanent political settlement would open the door to “a set of ceasefires managed or monitored by the UN ultimately [to lead to] a nationwide ceasefire.”

Jeffrey argued that US demands for an acceptable Constitutional Committee or another meaningful political settlement was not too much of an ask for the Assad regime and its international backers. “We are not trying to get rid of Assad,” he said. “We just want to see a [new] regime. . . that does not produce the kind of horrors that we have seen.”

When pressed on whether this represented a change of US policy to accepting a continuation of Assad’s rule, Jeffrey said he rejected the use of “regime change” due to its connotations of unilateral deposition by force. The search for a political transition in Syria “is a UN process that the international community has agreed to,” Jeffrey argued. While the United States could in theory accept a future Syria with Assad, it would have to be a “different kind of regime,” that rejected sponsorship of terrorism, use of chemical weapons, and violence against its own citizens, Jeffrey said. He maintained that the United States continues to believe that the UN Security Council Resolution 2254 is the only “road forward” as “its principle is that there is no military solution.”

Jeffrey said he believed the time is now for a real political solution. With tenuous ceasefires in the north of the country between government and rebel forces, and the near eradication of ISIS, the relative peace and calm that has fallen over Syria “allows a brief opportunity for diplomacy to work,” Jeffrey argued. This window of opportunity is the subject of a new Atlantic Council report by Steven Heydemann released on December 17—Rethinking Stabilization in Eastern Syria: Toward a Human Security Framework.

On a panel speaking with the report’s author, Brookings Institution Senior Fellow Tamara Cofman Wittes explained that Washington has “a moment when the presence of American forces and other American personnel on the ground creates a meaningful deterrent for the Syrian regime trying to reimpose its authority on its areas.” Once the United States decides to withdraw its personnel from the country, both Heydemann and Wittes argued, that leverage will go away, and it will be difficult to extract concessions from Damascus and Tehran.

With a White House that seems focused on quickly withdrawing the United States and its forces from Syria, however, time is running out for Washington to use its remaining leverage to shape a meaningful political settlement to end seven years of brutal war.

Image: US Special Representative James Jeffrey speaks at the Atlantic Council on December 17, 2018.