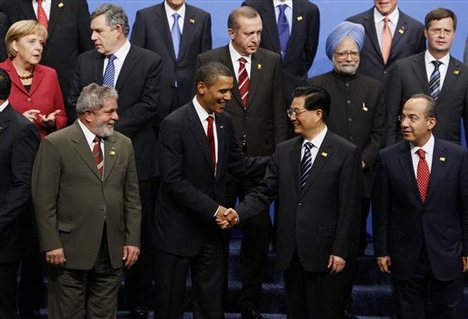 The media in China, Europe, and the U.S. would have their audiences believe America’s increased engagement of Asia and China’s expanding relations with Europe constitute a fearsome, new Great Game. American and European analysts allege that China is out to eat the West’s lunch, and the Transatlantic Community must do something to stop it. Chinese analysts prejudge that America seeks to constrain China’s pursuit of its interests, and China must break the blockade before it successfully coalesces.

Fortunately, the fear-mongering gusto of these analysts is all sound and fury signifying nothing. If there is a Great Game underway, it is simply too soon to call.

There may be competitive bones in China’s and America’s collective bodies politick. But there is no direct link between America’s efforts to expand its relations with Asian countries and China’s efforts to expand ties with Europe. Both China and America seek better relations with each other’s neighbors for various national interests. They are not competing for market share or for limited resources. There is no zero-sum game going on between China and the US.

China’s European diplomacy means it does not have to rely as heavily on American support to meet its development goals because, from the Chinese perspective, doing so would afford America could have leverage over China that it could use to limit Chinese actions in the future. China’s diplomacy worldwide seeks to build relationships that collectively reduce the threat of the US using its diplomacy and military might to constrain China’s freedom of action. By deepening ties to America’s closest allies, the European states and the EU, China thus addresses its worries over American containment.

America’s Asian diplomacy in turn means that America’s role in Asia is more resilient and will remain critical to Asian states in the long term. America is attempting to inject stability into a changing regional security landscape filled with growing uncertainty. The uncertainty is due to a number of considerations, chief among them reducing transnational security risks and hedging against China’s military modernization. The intent of China’s military modernization remains uncertain. China’s core interests are naturally expanding as its economy further develops and it needs a military that is eventually capable of defending those interests anywhere in the world. It remains unclear, however, whether those interests entail a future effort by China to exclude the US or others from continued, effective use of Asia’s global commons or an effort to defend and sustain the openness of those global commons. For all intents and purposes, China is not certain how it will use its newfound military might, and its intentions remain moving targets as long as China continues to rise, its economy develops, and its military modernizes. Either potential use of its military remains equally possible. America’s new Asian diplomacy thus seeks not only to improve the sustainability of US leadership in Asia, but also to reduce worries among Asian states over the uncertainty of China’s rise and increase long term regional stability.

There may, however, be an indirect relationship. In the absence of an effective Sino-American dialogue reducing mutual suspicions, America’s diplomatic renaissance in Asia and China’s deepening strategic engagement of Europe could serve to reduce tensions in the long term by hedging against the influence of each on the other’s core interests.
Such an indirect connection follows the logic articulated most succinctly by Secretary Clinton at a meeting with Cambodian students in Phnom Penh: "You don’t want to get too dependent on any one country." Although she was speaking from an American perspective, Clinton’s statement supports China’s second tier foreign policy objective of countering containment of its interests, particularly by the United States. Citing unprecedented levels of bilateral economic interdependence amid tensions related to mutual suspicions and global economic imbalances exacerbated by the financial crisis, the US and China do not want to rely as heavily on each other as they have in the past. Consequently both the US and China seek to hedge against the future possibility that their core interests could constitute a threat to each other.

It is almost as though the reactions of both sides to the infamous, stillborn G2 formulation of 2009 were to separately recognize that, while US-China relations remained critical to the world’s future, it was equally important to reduce reliance on each other and expand relations with each other’s neighbors in attempts to diminish interdependence. Both sides may have reached an impasse at addressing mutual suspicions directly, and so both must set aside the broad expansion of bilateral relations while increasingly seeking the comfort of other bedfellows in pursuit of their national interests.

The most effective way to reduce uncertainty about the role of America in China’s future and vice versa would be to hold more regular, candid discussions to address mutual suspicions and enhance strategic reassurance; to normalize military relations and insulate them from political relations; to set aside the Taiwan issue and all its inherent controversies over arms sales and other matters; and to stop pandering to domestic interest groups regarding who is more at fault for international economic imbalances. But none of these actions are likely to take place in the near term and each will remain a hot spot issue for the foreseeable future.

One of the great benefits of improving economic development in developing countries is the relative size of their economies grows and so too do the number of opportunities for future investment, trade, and commerce. Thus the more America, Europe, and China invest in other countries’ development, the bigger room there is for all three parties to participate and compete in healthy ways for economic relations with these countries.

The only way a zero-sum game begins to take shape between the West and China is if either or both begin to pursue protectionism in any meaningful way. This is precisely why the G-20 Summit at Seoul and future G-20 Summits are so critical.