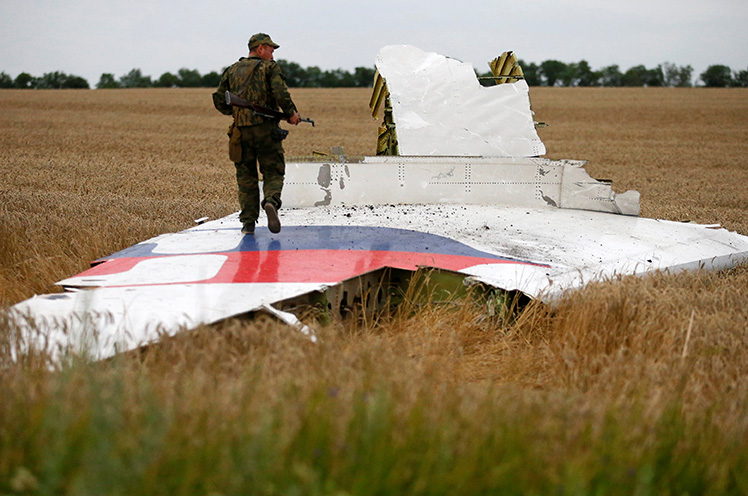 The Kremlin has turned its disinformation machine on those who are investigating the shoot-down of Malaysia Airlines Flight MH17 over Ukraine in July of 2014, using state employees, state-run media, and the state-run, though unacknowledged, “troll factory” of fake Internet accounts.

The primary goal of the media attacks has been to undermine the credibility of citizen journalist group Bellingcat, an independent researcher into the crash. [Editor’s note: Eliot Higgins, the founder of Bellingcat, is a nonresident senior fellow for Digital Forensic Research Lab with the Atlantic Council’s Future Europe program.] The Dutch Safety Board (DSB), which conducted an official investigation in 2015 and concluded that MH17 was downed by a surface-to-air missile, has also been targeted.

The attacks have followed a pattern that could be termed “vilify and amplify.” They come just before the publication on September 28 of the results of a criminal investigation into the crash by an international team led by the Dutch prosecutor’s office.

On September 14, independent Russian newspaper Novaya Gazeta published a leaked document from state-owned arms manufacturer Almaz-Antey. This document claimed to disprove Western theories of how MH17 was downed, including  both the DSB findings and evidence advanced by Bellingcat that Russia provided the weapon used. Mikhail Malyshevsky, an Almaz-Antey expert, signed the document.

Novaya‘s reporting focused on the political implications of the leak. Citing its own lack of technical expertise, the paper published the leaked document alongside a response from Bellingcat, which addressed and dismissed many of Almaz-Antey’s claims.

In contrast, the Kremlin-funded Internet outlet Sputnik failed to show either restraint or balance in its reporting on the leaked document and its contents.

Only a few hours after Novaya published its article, Sputnik ran articles on the Novaya report in English, French, German, and Polish. A Spanish version followed. Not one of these articles mentioned the Bellingcat response published by Novaya, and each added hostile language.

The English version accused Bellingcat of “systematic lying” in its presentation of evidence about the causes of the crash. The French article said that Bellingcat had been “unable to furnish objective proof to support its accusations against Russia,” while the German account deemed Bellingcat “tireless in their attempts to prove Russia guilty.”

None of these comments was attributed to an external source; they were interpretations added by Sputnik. These articles cherry-picked information in the Novaya article, and amplified parts of the article that challenged Bellingcat’s credibility.

Simultaneously, a document was published by segodnia.ru, a Russian nationalist site. Written by a group of analysts calling themselves “anti-Bellingcat,” but unsigned, this document has a number of troubling features. The first is the anonymity with which it was published. The second is the tone of vilification. The introduction called Bellingcat “pro-Ukrainian (pro-American?)” and “sofa experts,” accused the group of a selection of “fakes and falsifications,” and called them, strikingly, “our opponents.”

This adversarial tone raises doubts about the group’s objectivity.

Despite this, Kremlin-funded media amplified and proliferated the document unquestioningly. Sputnik’s English-language edition, for example, ran one article about the document immediately after the blog post emerged, and a separate article two days later. These articles were one-sided, adding editorial comments such as “the authors of the ‘Anti-Belligcat (sic) Report’ will continue their work to debunk the myths and falsifications being spread by the Bellingcat ‘experts.’”

Sputnik’s Italian edition published an even more biased article, claiming that Bellingcat’s objective is “to prepare public opinion for the fact that the pro-Russian militias of the Donbass, Russia and its armed forces are to blame for the disaster.” This article turned out to be a translation of a segodnia.ru report, without attribution.

Thus the unnamed bloggers vilified Bellingcat; Sputnik amplified them. This “vilify and amplify” technique cannot be qualified as journalism. It can only realistically be considered a smear campaign.

On September 16, Russian tabloid Komsomolskaya Pravda (KP) ran an interview which revealed the names and occupations of two of the “anti-Bellingcat” document’s authors. Their identities shed further light on the Kremlin’s methods.

One of the authors is Malyshevsky, the man who drafted the Almaz-Antey report leaked to Novaya. Malyshevsky is a technical expert, but he is also a high-ranking employee in a state-owned company set up by order of Russian President Vladimir Putin in 2002. His independence and objectivity are, therefore, open to question.

The second author was Yury Kotenok, editor of segodnia.ru and head of the press office at the Russian Institute for Strategic Studies, a think tank also created on Putin’s orders. According to the New York Times, RISS has ties to Russian intelligence. Its director, Leonid Reshetnikov, is a former lieutenant-general in Russia’s intelligence service, the SVR.

Kotenok regularly publishes video blogs supporting the separatists in Ukraine. He also comments for Russian far-right outlets, including Den TV and Zavtra, which combine nationalism with conspiracy theories. He cannot be viewed as impartial.

At no point in Sputnik’s subsequent reporting was Kotenok’s affiliation made clear. One article described him simply as a “leading author” of the “anti-Bellingcat” report. Later articles did not name him at all,  whether in English, German, French, or Spanish. A sister TV station, RT, named both Kotenok and Malyshevsky and accurately identified Malyshevsky, but referred to Kotenok only as the editor of segodnia.ru, not mentioning his other affiliations.

This use of the Kremlin media to amplify criticism of perceived opponents regardless of the credibility of the critic is consistent with earlier practice, such as RT’s biased reporting on Ukraine and Turkey.

Send in the trolls

The final piece in the machine is the Kremlin’s “troll factory.” This is an organization whose employees are paid to post fake content on the Internet. A number of websites purporting to be news agencies have been traced to the factory. These include riafan.ru, nahnews.org, fapnews.ru and nation.news.ru, all of which amplified the anti-Bellingcat reports.

Riafan.ru, for example, published an article that set out the key anti-Bellingcat arguments as if they were its own. Fapnews.ru attributed its article to anti-Bellingcat, but called the authors “enthusiast bloggers” and “activists.” The same article, haphazardly translated into English, was run by a hitherto-unknown site, Z-news.xyz.

Nation-news.ru called Bellingcat’s work a “vinaigrette of fakes,” and followed up with a headline stating that Almaz-Antey’s account had been “confirmed.” Nahnews.org was equally definitive, headlining that Bellingcat had been “smashed to pieces.”

This behavior sheds light on Kremlin propaganda practices. The system uses state employees to vilify “opponents,” then uses state-owned media and the “troll network” to amplify them.

So far, the campaign does not appear to have penetrated the Western media. Its significance lies more in the fact that, given the manpower and resources dedicated to condemning those who would tie the Kremlin to the crash, it reveals the Kremlin’s disquiet about the criminal probe’s likely findings.

As Novaya Gazeta indicated, these attacks could be a precursor to the arguments the Kremlin will use if it deems the findings of the inquiry into the MH17 crash to be unfavorable. That, however, will only emerge after September 28.

Image: An armed pro-Russian separatist stands on part of the wreckage of the Malaysia Airlines Flight MH17 after it crashed in the Donetsk region in Ukraine on July 17, 2014. The Dutch are due to announce on September 28 the long-awaited results of an investigation with Australia, Malaysia, Belgium, and Ukraine into the downing of the aircraft. (Reuters/Maxim Zmeyev)