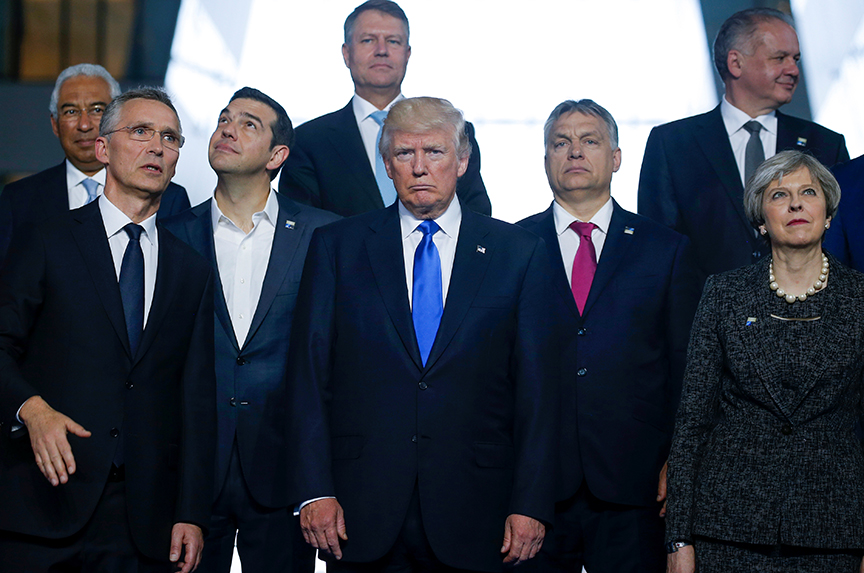 BRUSSELS — When the other twenty-eight allies gather for NATO’s next summit in Brussels in July, many among them will undoubtedly be waiting nervously for the arrival of Air Force One and the 29th allied leader it will carry to the Belgian capital—US President Donald J. Trump.

The reason for their nervousness will be money: they aren’t spending enough of it on defense, as Trump made so abundantly and bluntly clear to his NATO counterparts during their previous summit in May 2017, also in Brussels.

The financial numbers linked to ensuring Europe’s security are so skewed in favor of the European allies that if their total defense expenditure was placed on one side of a balancing scale and the US military budget plopped down on the other, the latter’s weight would catapult the former out the window. The White House and many members of the US Congress are not happy with this situation, and find it increasingly difficult to justify it to their constituencies.

Not surprisingly, NATO’s political headquarters in Brussels and its military one in the southern Belgian town of Mons are scrambling to demonstrate substance and progress come July.

On the military side, they will have some things concrete to report. For example, NATO is working closely with the European Union (EU) for the latter to swing chunks of its huge capital-project funds into infrastructure projects that will boost the ability of Europe’s militaries to rapidly deploy across their continent. There is a straightforward blueprint for doing this, which can be shown to the US leader.

The allies are also ready to reform NATO’s command structure by, among other things, soon creating a new logistics command devoted to the rapid deployment of allied assets in times of crisis.  All well and good.

What the allies will not be able to throw on the table, however, is much to show they are rebalancing transatlantic defense expenditure in any significant way.

In July it will be nearly four years since all pledged at their Wales summit in September 2014 to start marching toward NATO’s spending guideline of 2 percent of GDP. They gave themselves until 2024 to do this.

NATO will insist in July on certain successes such as, for example, the fact that just over half of all the allies now meet, or come very close to, NATO’s guideline of spending 20 percent of their defense budgets on equipment. And, as NATO Secretary General Jens Stoltenberg never fails to reiterate, the European allies have arrested their long post-Cold War decline in defense spending. That decline stopped in 2015 when it hit a low of 1.40 percent, rising to 1.43 percent of collective GDP in 2016 and to an estimated 1.46 percent for 2017.

Tiny as that is, at least it is forward movement. By contrast, US annual defense expenditure still towers above it, with Washington having set aside nearly 2.5 times as much (3.58 percent) of GDP for its military in 2017.

Finally, NATO will argue that the European allies and Canada have increased their spending in absolute terms since Wales. That is true; they added nearly $49 billion to their defense budgets during 2015-2017, for a positive collective percentage change in their real annual expenditure of 4.3 percent for 2017.

However, the operative word here is “collective.” Break out the results for individual allies and the picture changes significantly. But for a few exceptions among the European allies—and they are small players—there has not been any game-changing upward tick in spending on the European side of the pond for a long, long time.

Aside from the United States, only five allies met or exceeded the 2-percent guideline in 2017: Estonia, Greece, Poland, Romania, and the United Kingdom. Moreover, of NATO’s “big five” European allies, only the United Kingdom pipped the 2-percent post and only barely at that, with 2.14 percent of GDP. The others are well below that: France at 1.79 percent; Germany at 1.22 percent; Italy at 1.13 percent, and Spain at a miserable 0.92 percent. Only Belgium (0.91 percent) and Luxembourg (0.44 percent) did worse than Spain, though Luxembourg can be forgiven as it has virtually no army and thus tends to provide cash as its main support to the military operations of NATO as well as the EU.

So, with only six years left to meet their Wales pledge, are the prospects good for the European allies to reach NATO’s 2 percent guideline? Not very, according to NATO observers and insiders.

“If you look at the trend of the last few years,” says Tomi Huhtanen, head of the Wilfried Martens Centre for European Studies in Brussels, “the US continues to invest militarily in Europe, but as for the actual investment by the European allies during that period, not much has changed.”

Francois de Kerchove, Belgium’s senior diplomat to NATO, concurs and warns of the consequences in the long term if the European allies, including his own country, don’t turn the situation around.

“A better-balanced burden-sharing is fundamental to the Alliance’s future,” de Kerchove told a policy conference in Brussels on April 17.

“NATO will not remain viable for a minute if Europe doesn’t take more responsibility for its security,” he said, adding that “the United States has a whole new class of younger politicians who do not understand why their country should pay so much for the Europeans’ security.”

One method that could pull the European allies out of their NATO spending deficit would be to expand the Alliance’s definition of defense “expenditure” by assigning a value to outputs versus merely the input of money. This would include, for example, assigning values to quality of capabilities, levels of participation in allied operations or investment in auxiliary civilian infrastructure such as roads and bridges that also benefit the Alliance.

NATO planners and national officials are, in fact, grappling with this idea but, as de Kerchove observed, they haven’t yet come up with a solution. “How to measure these things has been a frustrating task for us because whatever criteria you choose will please some nations but not others,” he said.

The idea nonetheless deserves merit, according to retired US LTG Ben Hodges. “We need a more sophisticated approach to the spending guideline,” Hodges, the Center for European Policy Analysis (CEPA) Pershing Chair in Strategic Studies, told the April 17 event. “The 2-percent number gets tossed around like dues in a club, which is unhelpful.”

According to Hodges, national infrastructure outlays in support of NATO’s military mobility goals and even the money an ally spends on maintaining its nuclear arsenal could count toward the guideline. “I think the Alliance should take a hard look at the 2-percent calculus to redefine it,” he said.

Indeed, the Europeans could probably climb out of their low-spending trap fairly fast if they were allowed to count spending on physical infrastructure that supports, however indirectly, NATO’s deployment needs.

But do the allies really want to walk down that path? It would also mean putting a number on the US military’s infrastructure spending—and that would create yet another huge transatlantic gulf in security spending. Worse, it would surely run a big risk of spurring harsher criticism from the White House and a more serious backlash against Europe’s so-called security free-loader nations than currently exists in the US capital.

For the time being, output valuation is probably a Pandora’s Box best left shut, meaning NATO’s European allies have little option but to brace themselves for another potential dressing down when Mr. Trump comes to town.