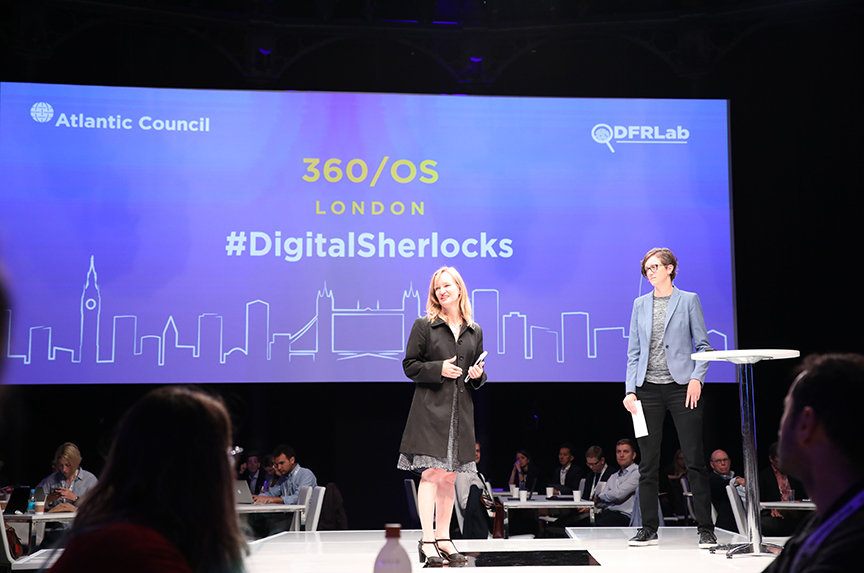 As more and more actors start to work with open source information there is an urgent need for a code of ethics to guide decision-making on what tools are used and when, speakers told an audience at the Atlantic Council’s 360/OS conference in London on June 20.

“The open source information community is at a really interesting stage of its evolution,” said Koenig. “We are seeing these methods being increasingly used by a diversity of actors… Whether it is diversity of geography or diversity of ethnicity or diversity of gender, having more voices and perspectives and talents helps us to build a faith in facts that we sorely need,” she added.

She noted that while traditionally it was the intelligence communities that used such investigative techniques, journalists have advanced this space. “But we’re also seeing other kinds of new actors in this space,” Koenig warned, adding that many of these newer actors “are realizing the utility of some of these methods for creating stories of fiction. That becomes deeply problematic when we are trying to get a narrative out of what is happening in the world.”

Koenig cited the examples of crowdsourcing for information on images, without blurring the subject’s identity, and issues arising from microtasking—the process of splitting a large job into smaller tasks and delegating these over the Internet—as being problematic.

“A big underlying core of what it means to do something professionally is to adhere to a certain code or set of standards that a community of practice agrees is a baseline for doing this work,” said Koenig. “There is also a maxim that with increased influence comes increased responsibility,” she added.

“We are now beginning to understand that the long game of disinformation is to chip away at the foundations of democratic institutions in part by undermining our faith in information, fostering doubt and distrust, and our goal, which attempts to confront these tactics head on, is a direct threat to that attempt,” she said. “We exist inside the same information space that we are investigating, and we are all targets.”

Starbird explained that disinformation “works by undermining trust: in institutions, in information sources, in us.”

“If we are effective at the things that we are trying to do then we become targets,” she said. “Disinformation works by neutralizing and delegitimizing threats like us, and the best disinformation builds on nuggets of truth—an honest mistake, an unfortunate association, narratives about our funding, how we are doing our work. In our space as open source researchers, mistakes are easy to make… and our own digital histories are long, so disinformation seizes these opportunities.”

Starbird said that “no matter that this is an asymmetric battlefield and that the other side aren’t constrained by rules and norms we need those rules and norms for our own safety and for the integrity of the work that we do.”

Once those rules and guidelines are agreed “we need to come together to defend our community as defined by those practices,” she added.

So what does a potential code of ethics look like?

Koenig admitted that it is difficult to pull together what an ethical framework might be for open source researchers, but that some guidelines exist in professions such as journalism.

She suggested three areas where there is growing consensus on building the framework of such a code. First, protection of the safety and security of the investigator, authors of the content, those uploading the content, the people depicted in the content, and the data. Second, building a faith in facts through truth and accuracy that can be ensured by peer review, methodological transparency, multiple working hypotheses, and proper training. And, third, a respect for other people, who is empowered, which stories are being told, and who is being made vulnerable.

“If facts are ultimately the currency for the work that we are doing today, that currency is being devalued at the moment and we need to be thinking aggressively about how we start to rebuild that currency and strengthen it so that we can do the work that we know has to be done,” said Koenig. “Arguably one way to begin to strengthen that and build it up is to lay an ethical foundation underneath it,” she added.

Image: Alexa Koenig (left), executive director of the Human Rights Center at the University of California, Berkeley, School of Law and Kate Starbird (right), director of the ecCOMP Laboratory at the University of Washington, discussed the need for ethical and methodological standards for open source researchers at the Atlantic Council’s 360/OS conference in London on June 20. (Sarah Halls/sarahhalls.net)