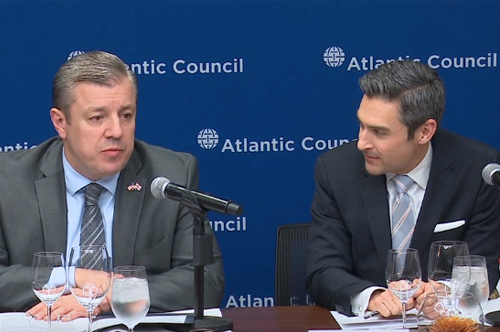 “Western passivity in the face of Russian aggression not only encourages Moscow, but also discourages the regional countries,” Kvirikashvili said.

“It is impossible to ‘appease’ Russia by striking geopolitical deals with Moscow, because tomorrow these agreements would be quickly forgotten by the Kremlin if necessary,” he added.

Even as international attention was focused on Russia’s annexation of Crimea in March 2014 and its subsequent support for separatists in eastern Ukraine, Russian President Vladimir Putin signed treaties with two breakaway Georgian provinces—South Ossetia and Abkhazia—that give Moscow control over their defense and borders.

These cooperation agreements “establish a definitive policy of creeping annexation of these lands by Russia,” said Kvirikashvili.

Kvirikashvili described Georgia’s relationship with Russia, which invaded Georgia in 2008, as its greatest security challenge. The Georgian government, he said, has consistently demonstrated its goodwill to persuade Russia to fulfill commitments made in a 2008 agreement and withdraw from Abkhazia and South Ossetia. It has also been conducting “principled negotiations” with Russians in Geneva and unilaterally established a visa-free travel regime for Russian citizens.

The Georgian government, nevertheless, “remained truthful to strategic patience. However, as history has taught us, it is an illusion to count on Russia’s goodwill in resolving conflicts,” he said.

Russian aggression, first against Georgia and subsequently against Ukraine, are clear indicators of Russia’s “intention of carving out a sphere of influence in the post-Soviet space,” he added.

Warning that the conflict in Ukraine will not be the last in the region, the Minister called for “not an incremental approach to each crisis, but a comprehensive strategy to contain and roll back extremist, aggression, and authoritarianism.”

A case for NATO membership

Georgia’s government firmly believes that national security and regional peace can only be achieved through its integration into NATO and a strategic partnership with the United States, said Kvirikashvili.

The minister laid out the progress Georgia has made toward democratization, media freedoms, rule of law, and tackling corruption, as well as better practices that have helped Georgia maintain economic growth and political stability in a volatile region.

“We have achieved a lot, but there is still more to accomplish,” he said.

Questions about the democratic process in Georgia must not become an “impediment or a conditionality for Georgia’s integration with Euro-Atlantic structures,” he added.

Kvirikashvili affirmed his government’s commitment to reforms but said that, above all, Georgia needs “reassurance” from its Western partners, particularly the United States. The Georgian people strongly favor membership in NATO as well as the EU, but such support cannot be taken for granted. “In the absence of solid commitments to Georgia from the West, our electorate may begin to question the benefits of Georgia’s Euro-Atlantic choice,” the Minister cautioned.

Looking toward NATO’s Warsaw summit in 2016, Kvirikashvili noted that Georgia has demonstrated technical and political readiness to advance to the next stage of integration with the alliance.

“Now the ball is in the West’s court, and we are ready to discuss creative approaches to advancing Georgia along the path to NATO,” he said. “We believe the United States is our key ally in this endeavor.”

Despite similar pitches from Georgian officials, Georgia is reportedly no closer to securing a Membership Action Plan (MAP) in Warsaw.

Georgia, meanwhile, is also eager to explore the possibility of a Free Trade Agreement with the United States.

“Needless to say, it would help Georgia economically, but also strengthen the rule of law in our country,” said Kvirikashvili.

“An American-Georgian free trade agreement would also demonstrate to regional countries that democratic reforms pay off and such reforms may have very tangible economic benefits,” he added.