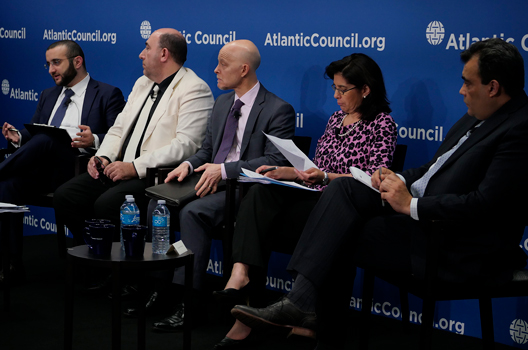 With no end in sight to a war that started six years ago, has claimed more than 465,000 lives, and displaced millions, it is fair to ask when is the right time to launch a much-needed effort to rebuild Syria. Should this effort start now, while the country is still ravaged by war, or once the conflict is over?

This quandary will inform the work of the Atlantic Council’s Rebuilding Syria Initiative, a two-year project that aims to identify what can be achieved now in terms of physical reconstruction in Syria, while simultaneously developing “a long-term plan that would address the massive reconstruction requirements of Syria in the future,” said Frederic C. Hof, director of the Atlantic Council’s Rafik Hariri Center for the Middle East.

“This project, however, is not just about bricks and mortar,” said Hof. “It will inevitably have to grapple with the question of how, if at all, investments, loans, and grants can proceed on a suitably massive scale if legitimate governance is absent.”

Hof spoke at the launch of the Rebuilding Syria Initiative at the Atlantic Council in Washington on March 21.

According to Faysal Itani, a senior fellow in the Hariri Center, “this [project] is our attempt to think urgently and strategically about the problem,” by linking social, political, and security functions together and approaching the concept of reconstruction from this integrated perspective.

While the initiative hopes to be ready with a plan for rebuilding when the conflict does settle down, Itani said the parties involved will not act in a vacuum and pretend the regime does not exist.

Syrian President Bashar al-Assad appears to have cemented his grip on power after his forces, backed by Russia and Iran, ousted rebels from the Syrian city of Aleppo late last year.

Omar Shawaf, a Syrian-Saudi businessman and philanthropist, said that the international community must invest in a plan to rebuild Syria now, even as the war continues. Despite the ongoing violence, he said: “the needs of Syrian people are so great, and the costs are too high, to wait for a solution.”

“This is also a process that takes time,” Shawaf said, adding, “starting only when there is a solution is too late for those who will be returning home the day after [the conflict ends].”

Hof, however, said any attempt at reconstruction in Syria must consider a fundamental question: can rules-based countries and international financial institutions provide the resources to rebuild Syria if those resources intersect with those parties responsible for the country’s destruction?

While there is a political context and complex geopolitical pieces, ultimately the focus of any reconstruction effort in Syria must be on the people, said Shawaf. “We cannot, must not forget what this effort is all about,” he said. “It is about people.”

Shawaf and Hof delivered introductory remarks at the initiative launch, which was followed by a panel discussion. Osama Kadi, president of the Syrian Economic Task Force; Todd Diamond, director for the Middle East at Chemonics International; Mona Yacoubian, former deputy assistant administrator of the Middle East at the US Agency for International Development; and Bassam Barabandi, former Syrian diplomat and co-founder of People Demand Change, discussed the prospects for and approaches to reconstruction in Syria. Itani moderated the conversation.

Kadi described how successful post-conflict reconstruction depends on four pillars: security, justice, economy, and governance. “Progress in all four of these areas is highly linked,” he said.

According to Yacoubian, outside actors engaging in Syria must prioritize humanitarian efforts, while beginning to put in place infrastructure that will stabilize the country. By thinking about longer-term needs “we can begin to ensure that we are already beginning to integrate some of those elements into the short-to medium-term work we are doing on the ground in Syria,” she said.

While working to alleviate immediate humanitarian needs, tactical attempts to facilitate reconstruction must grapple with security challenges, Yacoubian said. She said that parts of Syria that are either currently or formerly occupied by the Islamic State of Iraq and al-Sham (ISIS) must be secured and made safe in order to begin to return Syrians to their ordinary lives.

However, “the idea of pursuing stabilization and reconstruction in an environment in which there is no political cell” poses a serious challenge to any attempt to rebuild Syrian infrastructure, she said. Namely, the tensions between countering Assad and combating ISIS are “tensions [that] have real bearing on how we can operate on the ground.” According to Yacoubian, access to areas which must be rebuilt is “in part contingent on security, but often held hostage to the competing agendas of the many players and actors in this increasingly complex battlespace,” she added.

Kadi insisted that “the establishment of security in a post-conflict environment is crucial for reconstruction.” He said that “security addresses all aspects of public safety,” in particular, economic security.

According to Kadi, an economic model that works for Syria will stimulate security. “Syria will need to face the immediate twin challenges of restoring its basic capacity of economic governments and reforming institutions… that can shore up its stability,” he said.

“Political freedom and economic freedom are twins,” he added.

Hand in hand with humanitarian assistance and the attempt to ensure security, the primary goal of development in a post-conflict environment is “to simply improve the livelihoods of people on the ground,” according to Diamond. He insisted this is an “immediate necessity.”

The sectarian violence compounding the civil war has led to a “need to empower the local governance structures,” he said. Diamond called for a focus on local governments in reconstruction efforts, claiming that demonstrating what is possible at the local level will help increase community cohesion, which must be the first step before attempting national cohesion.

Reconstruction on the local level must focus on the basic delivery of essential services and the empowerment of local actors. Diamond said that, while continuing humanitarian efforts, outside actors engaged in reconstruction must support existing infrastructure in local communities. He described the ongoing work of civil and technical service providers such as nurses and teachers. With their help, hospitals and schools have continued to function throughout the conflict, therefore, outside actors will not define the structure, “but we’re going to support the structure that exists there.”

“What’s key to the institutional strengthening of these communities is them being empowered to do it themselves,” said Diamond.

However, in terms of local governance, Diamond emphasized the need for accountability and transparency when community leaders deal with international funding. “The needs are tremendous, and there has to be a prioritization of needs,” he said.

“This is not just about Syria,” said Shawaf. “It is many moving parts that will directly, or indirectly, affect us all.” He said “we should all be concerned about the national security implications, for the US, Europe, and the Middle East, if we do not engage… in the rebuilding of Syria.”

“There is just too much at stake for us not to have a proper conversation about how the rest of the world should be involved,” he said.

Kadi called for US leadership, saying “Syrians are in dire need of not only a political solution, but for Americans to lead the Marshall Plan,” referring to the plan for the reconstruction of Europe following World War II.

US President Donald J. Trump has said that the top national security priority of his administration will be the fight against terrorism. However, Shawaf insisted this should not be the administration’s only concern. “The United States must lead in thought and action in the region,” he said.

Barabandi said US efforts to rebuild Syria must consider Syria’s neighbors. He described how the United States has spent nearly $1.5 billion in regime-held areas, which indirectly supports Iran. Tehran’s belligerence in the region poses a security threat nearly as destabilizing as ISIS, said Shawaf. Barabandi said that “any thinking of reconstruction should not ever reward Iran.”