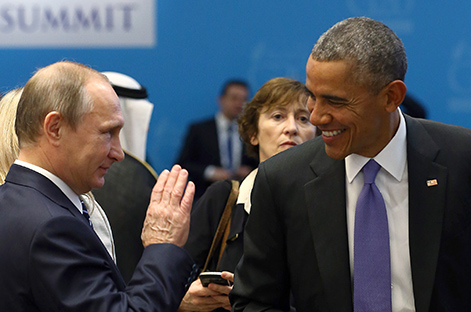 The shoot-down by Turkish fighters of a Russian warplane in Turkish airspace is an event of major significance in Syria, Ukraine, and beyond.

The savage attack by the Islamic State of Iraq and al-Sham (ISIS) in Paris on Nov. 13 has prompted French President François Hollande to seek a grand coalition with the United States and Russia against ISIS. The downing of the Russian jet, in or (if one accepts the Kremlin version) near Turkish airspace and over Syrian territory without any ISIS presence is a reminder that Moscow’s military effort in Syria has been devoted principally to 1) attacking opposition groups backed by the West, and 2) embarrassing NATO (with at least two prior incursions into Turkish airspace acknowledged by Moscow).

Last week, Russian Foreign Minister Sergey Lavrov stated clearly that to cooperate with Russia in Syria, the West must recognize that Syrian President Bashar al-Assad is going nowhere.  All this means that Moscow is willing to work with the West against ISIS on its terms.

The downing of the Russian warplane will seriously complicate President Hollande’s coalition-building efforts.  NATO is meeting right now at Turkey’s request.  While it did not invoke Article 4, Turkey has every right to expect NATO support in the face of repeated Russian incursions into its airspace.  Can President Hollande visit Moscow tomorrow, November 25, as planned?  If he does, the conversation will be very different than it would have been before this event.

It is noteworthy that the Kremlin has reacted cautiously to the destruction of its warplane; Russia media are not hyping this. What does this mean?  Ever since seizing Crimea, Moscow has pursued aggressive or provocative policies in numerous directions.  These include:

The West has taken only one strong security step in response to these numerous provocations. It has bolstered its military presence in the Baltic States and other eastern members of NATO.  That produced a storm of invective from the Kremlin.

The West has avoided, for example, providing weapons to Ukraine for fear of “provoking” Moscow. In Syria, US planes were given instructions to keep a safe distance from Russian warplanes. Now a NATO ally has shot down a Russian plane and the response is mild. The White House and NATO should draw the proper conclusions from this. Tiptoeing around an adventurer, or at least this adventurer, is an invitation to more aggression.

John E. Herbst is the Director of the Atlantic Council’s Dinu Patriciu Eurasia Center. He served as the US Ambassador to Ukraine from 2003 to 2006.

Image: US President Barack Obama chats with Russian President Vladimir Putin prior to a working session at the Group of 20 leaders’ summit in Antalya, Turkey, on Nov. 16. Turkey on Nov. 24 downed a Russian warplane, which it said violated its airspace. (Reuters/Kayhan Ozer)