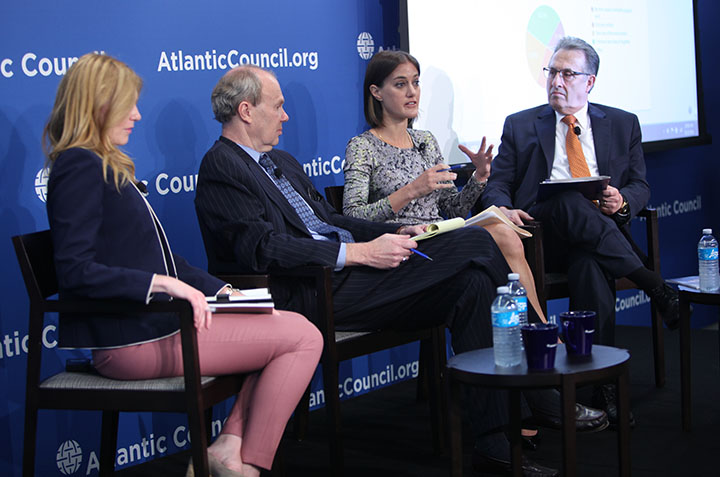 Strategic planning will play a crucial role in the next US president’s ability to mitigate an amalgamation of political, social, security, and economic threats at home and abroad, according to Mathew Burrows, director of the Strategic Foresight Initiative at the Atlantic Council.

“We need leadership on a lot of different levels to get us out of some of the bad spots we’re in and maximize those opportunities that do exist,” said Burrows.

In a geopolitical climate defined by the increased risk of major conflict, according to Burrows, “it may not be likely yet, but war between US and Russia, US/NATO and Russia, US and China, Iran and Saudi Arabia and other Gulf states is no longer unthinkable.”

Burrows participated in a panel discussion at the Atlantic Council on September 22 to launch his report, Global Risks 2035: The Search for a New Normal, a part of the Atlantic Council’s Strategy Paper series. He was joined by Samantha Vinograd, a Millennium Leadership Fellow at the Atlantic Council; and Earl Anthony Wayne, former US ambassador to Mexico and Argentina, to analyze the global risks threatening national security and present strategic foresight intended to guide the next administration. Erin McPike, director of communications at 1776, moderated the discussion.

In his report, Burrows asserts that “the post-Cold War security order has broken down and the consequences flowing from that are immense, potentially threatening globalization.”

The report analyzes geopolitical and technological trends, and considers alternative futures based on the potential responses of global actors. Burrows sees the current geopolitical scenario as one of projected “gradual fragmentation.” He said, “compared to where we thought we would be, it’s a pessimistic [outlook],” yet it assumes no major conflict between world powers, namely the United States and Russia.

Despite domestic inequality, increasing protectionism, and the ongoing upheaval in the Middle East, there has been ad hoc cooperation among nations. This can be seen in mutually beneficial coalitions between major powers, such as the agreement between the United States and China on climate change, as well as the nuclear deal between the P5+1 countries—the United States, the United Kingdom, Russia, China, France, and Germany—and Iran. “It’s not a very nice world, but at least it avoids some of the biggest risks that are laid out,” said Burrows.

Vinograd said, “presidents, citizens, our children…can really help determine the trajectory of where we go.” However, without taking the proper steps to avoid the escalation of major risks, Burrows sees the potential for an increasingly bipolar world, one that situates Russia and China against the United States and Europe. In this, he contended, US relations with China will play a crucial role. According to Burrows, China wants solid economic ties with the West, but “say China’s economy flounders,” he continued, “you could see it much more aggressive than it is and you see tensions rise between the US and China.”

“We also have to think about non-state actors, and increasingly the technology developments…[that] give them a leg up on the kind of damage they can do,” said Burrows. The technological revolution, in combination with climate change, economic inequality, and changing demographics poses further threats to social and political equilibriums. “Those factors that have led to the increasing inequalities, the social and political breakdowns, I don’t think are going to go away easily,” Burrows said. “There are no good, easy solutions.”

However, the report provides analytical structure to consider the worst-case scenario. “There are things that we can do to determine where we end up,” said Vinograd.

In order to mitigate global risks and prevent potential negative outcomes, “you have to build strategic planning into the day-to-day thinking” of the next administration, according to Vinograd.  The next president “needs to balance the strategic with the tactical,” she said, focusing on how the new commander in chief needs to take the time to consider global threats in comprehensive terms.

“Managing complexity is the big challenge for leaders around the world, especially in the United States,” said Wayne. He continued, “there is more nationalism, more protectionism, more extremist views about religion, and you can see that in practically every region around the world.” Consequently, the international community needs to consider how to respond to these new modes of thought.

In order for the next administration to assess the most pressing threats, Vinograd claimed “we have to prioritize and tier the risks to national security in this country.” Concerns regarding nuclear weapons, disease, conflict with Russia, and relations with China constitute the greatest threats at hand.

“The basic dynamic…is that the focus is on the near term,” according to Wayne, however “the level of complexity of life is going to continue to accelerate.” In order to cope with these challenges, the US government must build into its institutions the capacity to develop leaders, because “leadership at all levels…is very important,” said Wayne. He said, “in the sense that the consequences are not clear, we’re going to have to develop that capacity for a cadre of people to respond quickly, thoughtfully to the unexpected.”

Referring to institutionalized strategic planning, exemplified by the State Department’s Quadrennial Diplomacy and Development Review,  Wayne asserted, “it will take serious direction from a president, from the start…to put this in place and make it work.”

However, according to Burrows, “we have a lot more risks that we…collectively have the resources to deal with.” Wayne claimed that the allocation of resources will present a significant, yet not insurmountable challenge.