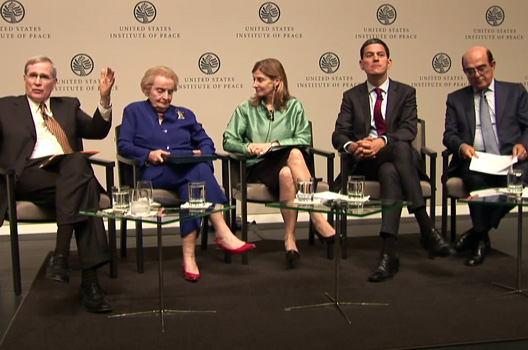 Panel looks at view from the Middle East, examines US’ role

Few people would be surprised to learn that people in the Middle East—just like Americans—care first and foremost about bread-and-butter issues, their lives, and the lives of their families.

“Contrary to the myth that [people in the Middle East] go to bed at night hating Israel, wake up in the morning hating America, and spend the day in the mosque hearing some preacher teach them to hate a little bit more, they actually went to bed at night thinking about their kids and woke up in the morning worried about their jobs, and spent the day working real hard to try to get a better life,” pollster James Zogby said at a June 4 meeting at the Atlantic Council.

“Their values and their concerns stacked up pretty much with what [the] man on the street in America would say they want with their lives,” said Zogby, Managing Director of Zogby Research Services LLC and founder of the Washington-based Arab American Institute.

The discussion, titled “A View from the Region,” marked the inauguration of the Atlantic Council’s Middle East Strategy Task Force (MEST)—a bipartisan effort that will examine how the United States and key Arab countries can work together.

“We are not freaks of nature,” El Mahdi said via teleconference. “The idea that there is something wrong or exceptional about this region needs to be rethought.”

Following the Arab Spring uprisings beginning in 2011 which toppled long-entrenched dictatorships but left chaos in their wake, people in the Middle East have been described as “irrational actors,” she said. “When people have to make a choice between their personal safety and their freedoms, between the safety of their children and being able to live in a democracy, they, rationally, tend to chose their own personal safety.”

The euphoria of the Arab Spring has been replaced with a feeling of despair, El Mahdi said.

Among the countries buffeted by the Arab Spring, only Tunisia provides a ray of hope. In Libya, chaos followed the dictatorship of Moammar Gadhafi; in Egypt, Hosni Mubarak has been replaced by a former military General; in Yemen, Houthi rebels have toppled the government, creating a dangerous vacuum; and in Syria, a civil war that has destroyed the country and killed more than 220,000 people shows no signs of ending.

In the midst of this upheaval, the Islamic State of Iraq and al-Sham (ISIS) has taken root and thrived, spreading across the region in its quest to carve out a caliphate.

“Regional powers and international powers have put the majority of citizens of this region in a position whereby they have to become more apathetic because they have lost all faith that there can be a better future,” said El Mahdi. “Some of them need to resort to violence and extremism.”

MEST: A look at the Middle East

MEST, co-chaired by Albright and Hadley, will explore what people in the Middle East consider the region’s biggest challenges and what role they see for the United States. It is working with US, European and Middle Eastern advisors.

“This is not Americans talking to Americans about what others ought to do. This is a multi-stakeholder conversation about what those in the Middle East believe their future ought to be and then how do we help them get there,” said Frederick Kempe, President and CEO of the Atlantic Council.

Polls following the September 11, 2001, attacks on the United States found that people in the Middle East like American values, but “they don’t like the way we treat them,” said Zogby. One respondent said he felt like a “jilted lover”—he liked America, but didn’t think America liked him.

The Middle East is of “tremendous importance” to the United States, said Albright. “It’s facing a set of overlapping crises unlike any we have witnessed in generations.”

“We are fully covering many of the issues that we see as root causes of some of the disruptions,” said Albright. The working groups’ reports will be incorporated into a final taskforce report.

“We’re not going to look [at] how to simply codify the inside-the-Beltway consensus. We want to engage with people on the ground in the region and to incorporate their perspectives into everything we do,” said Albright. “In short, we want to listen more.”

Hadley, who is Chairman of the United States Institute of Peace’s Board of Directors, said the task force would “start with the views, perspectives, and interests of the citizens and leaders in the region on the problems of the region and the challenges it faces.”

The task force will study the underlying causes of the Middle East crisis, the rise of extremism, what sort of government people in the region would support, and what the people need to resolve the crisis and how the United States, Europe and the rest of the world can help, he added.

El Mahdi, describing the Middle East as being in a state of flux, said it was wrong for the United States or even regimes in the region to focus primarily on stability.

“The idea is to question at what cost is stability being brought about,” she said. “The only way forward for this region is to have a kind of stability that does not come at the expense of people’s dignity, their freedom, and their bread-and-butter issues.”

So, what is Washington’s role?

“What happened in Eastern Europe is they wanted to be like the West, and that is not what is happening here,” said Albright.

People in the Middle East know that the United States is a valuable participant in the region, but they are not confident to have it play the leadership role that oftentimes the United States wants to play or feels it has to play, said Zogby.

El Mahdi said the people in the region are well aware that they are the main actors and don’t look to the United States for help, while Zogby said they also don’t necessarily see the United States as a positive agent of change.

Younis warned against crafting policy on the basis of what is presently popular in the region.

“Democracy has a really bad brand right now with [people in the Middle East] and absolutely we made a plethora of very bad policies decisions in the region, especially in the last fifteen years, but moving forward we must not simply do what is popular,” said Younis. “What has become popular at this late date in the Arab Spring is not something we can get behind.”

Hadley, who served in the George W. Bush administration, said the United States has its own interests, which don’t always line up with the preferences of people in the Arab world.

“When your country is attacked from that region, you have to respond and do things that many times are not going to be popular in that region,” he said. “One of the things we have to do if we get this kind of understanding in the region is we are going to have to put it through the filter of our own national interests.”