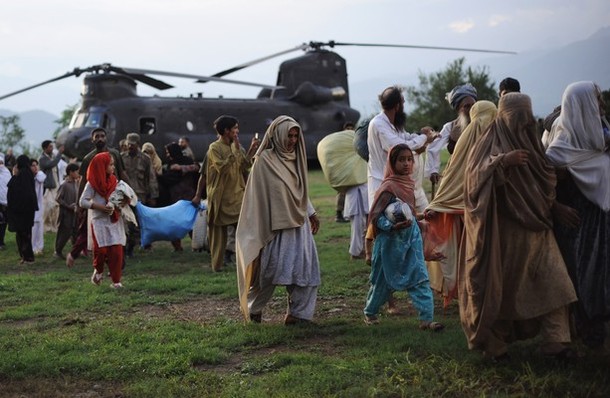 I spent some of the day going over the figures regarding the damage in Pakistan, and the damage that has taken place over the last several days of the monsoon season is beyond what any single nuclear weapon is capable of. Even more interesting, the areas impacted in Pakistan are the areas that every single think tank that has written a report regarding the Afghanistan war has discussed as being a vital part of the war.

And yet… there is virtually no analysis of what this incredible disaster might mean for the war. It is barely stretching an analogy to suggest God just pissed his Sunday afternoon 6-pack all over Pakistan during Ramadan while the national security experts in the US discussed Secretary Gates future. It could be worse, we could be the foreign policy expertise of the United States stuck in a political rut discussing a mosque in lower Manhattan pretending that is somehow the most important Muslim issue on the same day 20% of the second largest Muslim country in the world is underwater.

On Monday I felt like I was living in the twilight zone. These are the official numbers to date, and take care to note that Sindh is mostly unreported and the worst hit.

But the issue appears to be invisible. I don’t know what to say – maybe it doesn’t matter. I would have thought had we nuked Pakistan someone would have written a war related op-ed to discuss the potential ramifications, but if mother nature drowns 20% of the country doing about the same amount of damage over a significantly larger portion of land – it doesn’t seem to be important.

A few thoughts come to mind.

1) There are now 18 US aircraft operating for flood relief efforts in Pakistan. They are competing for hearts and minds against the whole of the Taliban allied political wings who live throughout that region of Pakistan. The DoD has elevated the priority of soft power – specifically disaster relief and humanitarian response – in strategic documents over the last few years. Here we are in direct competition for hearts and minds in the midst of a disaster, with the largest concentration of military forces we have assembled on the planet in the neighboring country – and the best we can do is 18 helicopters a week later to help the X millions of people impacted by the flooding?

Pakistani people know the United States unmanned drone very well thanks to their newspapers and our actions in that country against Al Qaeda and affiliates. Here is a chance to put a positive visible symbol of US power over Pakistan at a time the need far exceeds local capacity – and we can’t do it why?

2) Private funds to Pakistan is incredibly low for reasons several media outlets have only begun to speculate. Perhaps no one trusts the current Pakistan government, or perhaps people believe donations will go towards helping fund terrorism? I have no idea, but in the first 10 days after the Haiti earthquake the world was able to raise $1 billion. So far the world has raised almost $305 million for Pakistan flood victims – and $86 million is US. Holy WeDon’tGiveAShit batman!

3) Ahmed Rashid sums up the problem better than I ever could:

Though it has received only moderate attention in the western press, the torrential flooding of large swaths of Pakistan since late July may be the most catastrophic natural disaster to strike the country in half a century. But even greater than the human cost of this devastating event are the security challenges it poses. Coming at a time of widespread unrest, growing Taliban extremism, and increasingly shaky civilian government, the floods could lead to the gravest security crisis the country—and the region—has faced. Unless the international community takes immediate action to provide major emergency aid and support, the country risks turning into what until now has remained only a grim, but remote possibility—a failed state with nuclear weapons.

I don’t know what the US government has decided to do about Pakistan. Maybe the option of a full court blitz of soft power into Pakistan was offered and denied. Maybe there was no offer for additional help at all, or perhaps the US believes doing very little is better than doing a lot. Maybe we picked teams and mother natures team looked most appealing. Whatever we have decided to do, the only thing that seems clear to me as a bystander half a world away is that this is the most important battle being fought in the Afghanistan war – if Pakistan matters at all to our Afghanistan war objectives.

We have spent a decade talking about how the enemy has a better communication strategy in Pakistan than we do. If 18 helicopters is the best we can do when 20% of that country is underwater – then either our apathy or inability to be agile in reaction to situations like this explains why. It doesn’t make sense for us to fight the war in Afghanistan and not be serious about making a positive American impact on this part of Pakistan – not when we keep noting in strategic reviews how much influence this region has on the Afghanistan war effort. We aren’t even trying to win the populations that matter in this war – and in my opinion that represents the best case to date why it is time to pull our troops out of Afghanistan.

Raymond Pritchett, known on the Internet  by the pseudonym Galrahn, is a technologist, entrepreneur, and owns a technology consulting company in upstate New York. He also operates the Information Dissemination blog, where this article first appeared.