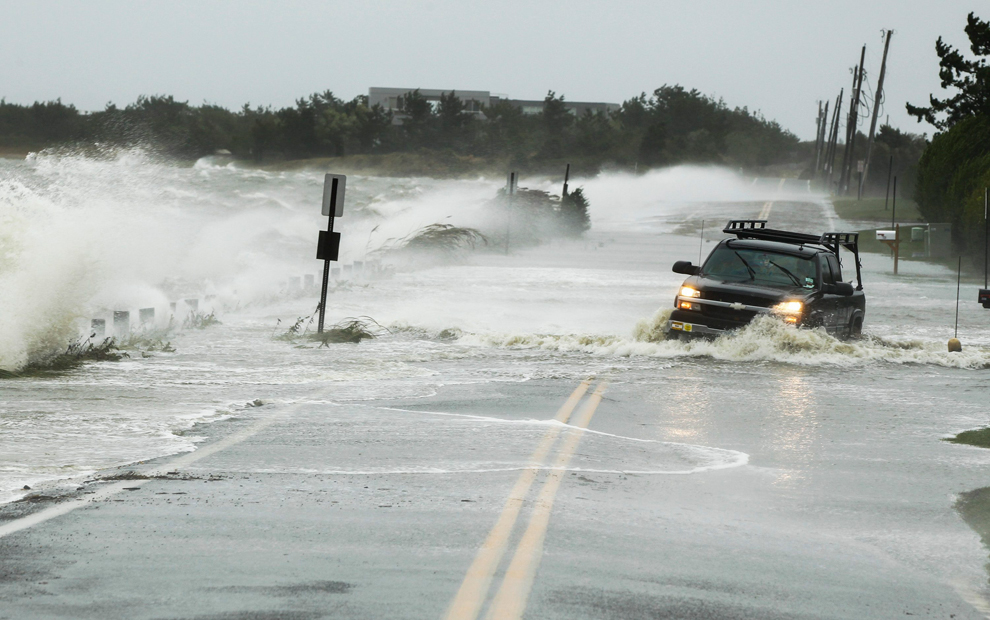 Linking a single storm to climate change is perilous at best for the simple reason that anything less than a decade or two of data isn’t climate,  it’s just weather. But Sandy may yet prove the exception owing to its sheer anomalousness.

Even before Sandy fully dissipated, researchers were identifying climate change signals (detailed below) hinted at in its brief lifespan. And even if Sandy proves to not have a present-tense climate change link, its uniquely unfortunate combination of causal factors and make it a storm from the future—a powerful hint of what is to come from a warming and more energetic and unpredictable global climate.

As indicated in figure 1, worldwide sea levels have been rising for the last century and the rate of rise is increasing. The overall rise—8 inches in just over a century—doesn’t seem large until one considers that this the baseline atop which tides and wave action operate. The Monday, October 29 storm surge at the tip of Manhattan set a new record of 13.88 feet above mean low water, boosted by the fact that the storm surge arrived at high tide.

Estimates of future rise are uncertain but range between 2 to 7 more feet of sea level rise by the end of the century. Over 2.6 million homes and nearly 5 million Americans live in locations less than 4 feet above sea level.

Normally, a hurricane like Sandy that managed to travel into the mid-latitudes would have been turned eastwards by high altitude westerlies. This time however, a strong high-pressure cell over Greenland blocked the eastward flow, causing Sandy to be deflected to the west. This blocking pattern likely is caused by a shifting “polar vortex” jet stream that circles the North Pole from west to east. Water exposed by north polar ice retreat (which hit a record low this summer) absorbs the 24-hour summer sunlight and then releases heat into the atmosphere, weakening the Polar Vortex and disrupting its position. Shifts in the polar jet stream have been tied to deadly heat waves in Europe (2003) and Russia (2010) as well as to floods in Pakistan and the US heat wave last summer. It was dumb luck that this blocking pattern occurred just as Hurricane Sandy was moving north, but variations in the polar jet appear to be becoming more common as Arctic ice continues its retreat.

Hurricanes like Sandy draw their energy from warm oceanic waters. Atlantic water temperatures off the US east coast were unusually warm this year. According to the National Oceanic and Atmospheric Administration, the Atlantic off the northeastern US warmed to the highest levels ever recorded in the first half of 2012. Figure 2 depicts this temperature anomaly. Temperatures were high through the summer and remained warm into the fall. The consequence was that instead of dying out over cooler mid-latitude waters, Sandy kept absorbing energy along its entire trip up the east coast.

So, is Sandy just weather or an indicator of the new normal?

It is too soon to tell, but we are quite certain that the possibility of a link between Sandy and climate change will be closely studied—and furiously debated—in the months to come. In the meantime, the debate over whether climate change is occurring is over. The scientific consensus in favor of active climate change is overwhelming and we have even seen all but the most stubborn politicians mute their criticism or reverse their previous positions. Against this backdrop the question of whether Sandy is a climate change weak signal may be moot. Whether or not Sandy is tied to climate change in 2012, this ferocious and destructive October storm is a prologue of storms to come in the decades ahead.