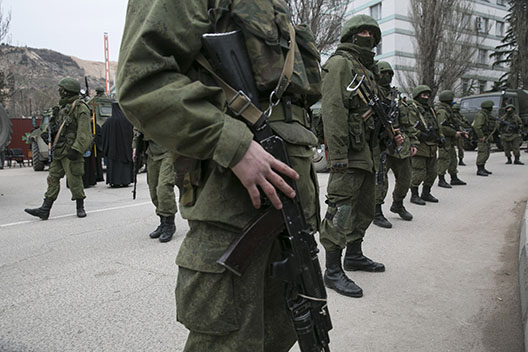 The first thing to be said about the question I’ve posed in the title is that no one truly knows — and you shouldn’t believe anyone who says they do. Even Vladimir Putin is unlikely to have figured out all his moves, or decided what would constitute victory for him in Ukraine, at an acceptable price.

The second point to be made is that the dizzying pace of events won’t stop pundits from proffering prognostications. But the best they can — or certainly should — do during major crises, and this certainly is one, is to present the range of possibilities.

But before I do that, a word about the divergent perspectives on what has occurred in Ukraine.

In the United States (and Europe) the outer of President Viktor Yanukovych’s government has, in the main, been perceived as a popular revolution against a regime that had long been running the country into the ground and robbing it blind to boot.

Yanukovych fueled the fire of public anger (which was particular intense in the Ukrainian-majority central and western parts of the country) in December. He mothballed the Association Agreement (AA) he’d long been negotiating with the European Union and turned to Russia for a $15 billion credit line. (Ukraine was, and remains, on the brink of defaulting on its mammoth debt.) He also secured a deal from Putin for lower gas prices, important given that 60 percent of Ukraine’s consumption is imported from Russia.

Yanukovych’s decision sparked the mass demonstrations — in which lives were lost — that eventually toppled his government. Forced to flee, he has surfaced in Russia and sought its protection.

So in this version of events, we’ve witnessed a democratic revolution. The Ukrainians are freedom-loving heroes; the bad guys have been vanquished.

Well, that’s not how Putin sees it, and many in Russia share his alternative view.

From Putin’s perspective, Yanukovych, having become president in 2010 after an election that international observers deemed to be largely free and fair, had the legal right to ice the AA and to turn to Russia for aid. Thus the crowds that drove him from office engaged in a coup. Where the West sees heroism and democracy, Putin sees illegality and extremism.

Moreover, Putin believes that the EU egged on the demonstrators because what the West wants — and has long wanted — is to undermine Russia’s position in its historic spheres of influence, all the while claiming to foster democracy and human rights. Moscow has painted the right-wing nationalists in the Ukrainian opposition as, among other things, neo-Nazis and claims that they now run the show in Kyiv.

Let’s put aside the question of whether Putin’s interpretation is accurate. That’s now irrelevant. What matters is that this is how he sees the drama in Ukraine and that this outlook will shape his actions — now and in the weeks ahead.

The place to watch most closely is the Russian-majority (close to 60 percent) Crimean peninsula, an “autonomous republic” within Ukraine. In 1954, Soviet leader Nikita Khrushchev transferred the territory, which juts into the Black Sea and is a popular vacation spot, to Ukraine, then the Ukrainian Soviet Socialist Republic. Ironically, he did it to commemorate the 300th anniversary of the union between Ukraine and Russia.

Since the collapse of the USSR, nationalists in Russia have questioned the legality of what Khrushchev did and have demanded Crimea’s return.

There’s more: Crimea’s port of Sevastopol hosts the Russian Black Sea Fleet, and Yanukovych extended the lease Russia already had there to 2040. Sevastopol, you should also know, is administered by the Ukrainian central government in Kyiv, not by a locally elected leader.

Are you with me so far?

On March 1, Putin asked the upper house of Russia’s parliament (the Duma) for authorization to dispatch troops to Ukraine (not just to the Crimea), ostensibly to defend Russian citizens.

Here’s the background to that request: On February 27, troops without national markings on their uniforms commandeered Crimea’s parliament and other government buildings.

That was followed by an affirmative vote to hold a referendum on Crimea’s future status — on May 25, the day on which Ukraine’s presidential elections are to be held. The deputies also sacked the local government.

Sergei Aksyonov, who replaced the head of Crimea’s government and is a Russian nationalist, lost no time in declaring Yanukovych’s ouster illegal. He also called for Moscow’s assistance, supposedly to protect the Russian population against what he has labeled a government of extremists in Kyiv. Never mind that the Ukrainian constitution doesn’t contain provisions for regional referendums, as opposed to national ones. (We’re way past legalities now.)

To complicate matters, Sevastopol now has a (pro-Russia) mayor, Aleksey Chaly, no matter that under the law the city is administered directly from Kyiv. The Kyiv-appointed head of Sevastopol’s government has been sent packing.

This, in essence, is the context in which Putin has asked the Russian parliament to authorize the dispatch more troops to Ukraine (some have already been sent to Crimea).

Putin had been watching the Ukrainian drama with growing concern over the past few weeks. But he was constrained from acting. He didn’t want the bad PR to overshadow and tarnish the Sochi Winter Olympics, into which he’d invested so much money and prestige.

Post-Sochi, he has taken off his gloves. He’s now determined to show that he’s no pushover — his legitimacy at home and credibility abroad demand it, at least in his eyes.

Now here’s the proverbial $64-million question. Will Putin secure Crimea’s secession after overcoming whatever resistance the Ukrainians and (Muslim) Tatars who live there and want to remain part of Ukraine may mount? (Crimea is the latter’s historic homeland, from which Stalin deported them en masse during World War II, after charging them with disloyalty. Most of the exiles perished but survivors were allowed to return home in the post-Stalin years).
If so, he’ll create a pro-Russian statelet in Crimea, much as Moscow did in Georgia (Abkhazia and South Ossetia) and Moldova (Transnistria).

But the real question is what will happen after that, and where.

Will Putin make a parallel move in Ukraine’s east — the Donbass as it’s called — which has many more ethnic Russians (though they are not a majority) than do central and western Ukraine?

The Donbass is a much bigger place, in area and population, than is Crimea. Sending ground troops, doubtless following requests for “assistance” from pro-Russian groups, will be a much bigger gamble and could require a long-term occupation amidst resistance from anti-Russian forces. Not all people in the Donbass favor alignment with Russia. Millions of Ukrainians — and Russians — who don’t want their country truncated also live there.

Putin already has a stubborn insurgency to handle in Russia’s volatile North Caucasus region. Does he want to risk another in the Donbass?

Even if he prevails in the Donbass, what will be the costs of an occupation? I don’t mean blood and treasure alone but also the damage to Russia’s relationship with the US and Europe.

It could be said that Putin doesn’t give a damn about the West. Perhaps that’s so.

But there are good reasons for him not to burn Russia’s bridges with the West. One is that an ascendant China lies across Russia’s vast southern frontier. For now, Moscow and Beijing are now aligned in a “strategic partnership.” But Russian strategists are increasingly worried that if Russia writes off the West it risks living under China’s shadow and, in time, becoming Beijing’s satellite. That’s not a future Russians relish.

Yet there’s not much the United States can do to stop Putin.

No one in Washington will risk war with a nuclear-armed Russia over a country located on the Russian doorstep.

The warnings President Obama and others in his administration have issued to Putin shouldn’t suggest otherwise. In fact, Obama should cease drawing red lines that he’s not prepared to enforce. That’s what happened last August following the Syrian government’s use of chemical weapons against civilians, and all Obama did was to make the United States look weak. Putin can spot weakness a mile away, and his army is a lot more powerful than Bashar al-Assad’s.

Will Putin, assuming he prevails in the Crimea (what can Ukraine’s new rulers really do to stop him?), declare victory and call it quits, concluding that he has shown his fellow Russians and the West that he’s still the tough guy who can’t be toyed with?

Or will he go for broke and send troops into the Donbass, realizing that the United States and Europe won’t risk starting a war and that all they will do is to issue empty condemnations?

I can’t answer these two questions with any confidence. But I do know this: What Putin does in the Donbass will determine how big and dicey this crisis is going to become. We’ll see soon enough.