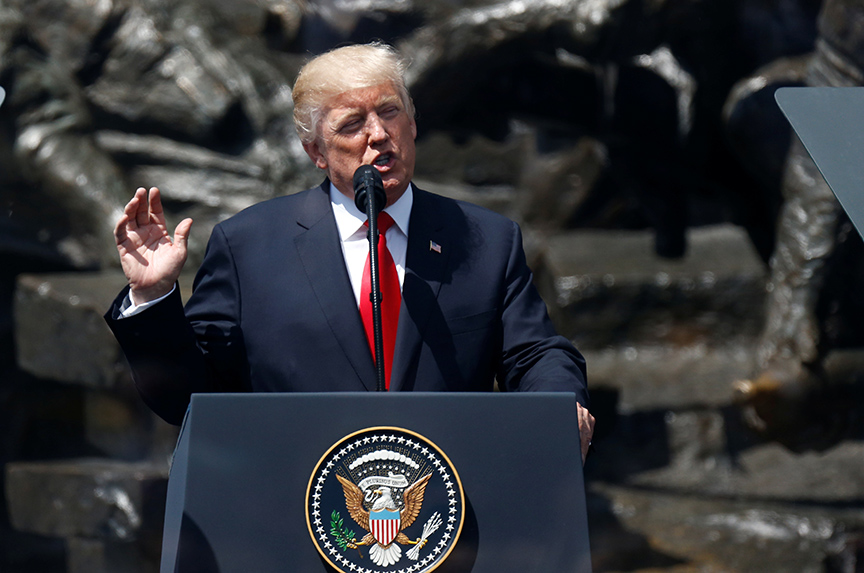 Russia has decisively expanded its global footprint in a way that analysts say challenges the West and will force US President Donald J. Trump to rethink his “America First” strategy.

This challenge extends well beyond Russia’s neighborhood—Ukraine, Georgia, and the Baltic States—to Syria, Libya, and even Afghanistan. Western governments and intelligence agencies have also accused Russia of meddling in elections in the United States and Europe.

With this as a backdrop, Trump and Putin will meet on the sidelines of the G20 summit in Hamburg, Germany, on July 7. The meeting takes place amid investigations by a special prosecutor and congressional committees into ties between the Trump campaign and Russia.

Trump has been less than enthusiastic about blaming Russia for meddling in the presidential election he won in 2016. “Trump needs to unequivocally state that Russia violated the sovereignty of the United States by attacking the very core of its democratic system,” said Evelyn Farkas, a nonresident senior fellow at the Atlantic Council. He also needs to make clear to Putin that there will be consequences if there are further violations of US sovereignty, she added.

Russia continues to put out propaganda and is holding on to data it gathered during hacks of Democratic and Republican Party websites last year with the likely aim of “weaponizing it” and using it in the future, said Farkas, who served in the Obama administration as deputy assistant secretary of defense for Russia/Ukraine/Eurasia.

Trump’s aides have said the president will discuss whatever is on his mind in his meeting with Putin.

“Chances are, given [Trump’s] strong feelings on the subject, one thing he will not bring up is the evidence of Kremlin interference in our presidential elections,” said Herbst.

Nevertheless, there is still plenty for Trump and Putin to discuss and it will be important for the US president to clearly state US positions in order to set the stage for any future cooperation with Russia.

In March of 2014, Russia annexed the Crimean Peninsula from Ukraine. It has since supported separatists in eastern Ukraine where peace remains elusive despite Russia and Ukraine signing the Minsk agreements, which include a bilateral ceasefire.

“If [Trump] is serious about putting US-Russia relations on a better, but realistic footing, he will raise both Ukraine and Syria” in his discussion with Putin, said Herbst.

“To pursue a policy that will be both credible and effective in Washington, he will need to inform Mr. Putin that Moscow’s aggression in the Donbas must cease. It is not certain that President Trump is prepared to deliver that message at this point,” he added.

In September of 2015, Russia intervened militarily on the side of Syria’s embattled president, Bashar al-Assad, in that country’s civil war. Moscow’s role in Syria has become a point of friction with the Trump administration since the United States responded to a chemical weapons attack with a missile strike on Assad’s forces in Syria on April 6.

Trump should make clear to Putin that “killing [the Islamic State of Iraq and al-Sham, or ISIS] in Syria and keeping it dead cannot be squared with an ongoing central political role for an Assad regime on Iranian life support,” said Frederic C. Hof, director of the Atlantic Council’s Rafik Hariri Center for the Middle East.

“The United States poses no objection to a strong Russian-Syrian bilateral relationship. The United States does not favor violent regime change in Syria. But, the United States is also acutely aware of the symbiotic relationship between the Assad regime plus its Iranian supporters and al Qaeda-related-or-descended extremists. The latter cannot be permanently neutralized so long as the former wages unrestricted warfare—chemical and otherwise—against Syrian civilians,” said Hof.

Contending that Syria might be a more profitable area for cooperation between the United States and Russia, Herbst said: “If Moscow understood that, in the face of Mr. Trump’s more assertive policy, its military intervention will not deliver a victory to President Assad, the two sides might strengthen cooperation in a way that has the prospect of stabilizing the country.”

Trump should assure Putin of his willingness to work with Moscow to reduce violence and to reach a political solution that preserves Syria’s territorial integrity and the Syrian state, said Hof. “Washington would be willing to take the lead, contingent on the rise of legitimate Syrian governance, in organizing the international community for Syria’s reconstruction. All of these things can be accomplished in ways fully consistent with Russian interests,” he said.

“But President Trump should urge Mr. Putin first to get the client he shares with Iran’s supreme leader out of the mass murder business. Assad ignites extremism and his Iranian masters add kerosene to the fire,” said Hof.

Noting that the United States has already made it clear that it will react militarily to chemical attacks committed by the regime, Hof said: “Trump should warn Putin that Washington may well retaliate militarily to any regime act of mass civilian homicide.”

Hof said: “ISIS and similar organizations will remain undead as long as collective punishment remains both the centerpiece of Syrian governance and the survival strategy of a bottomlessly corrupt and incompetent family enterprise. Iran would be satisfied with an ongoing Assad-extremist symbiosis. Would Russia?”

As it did in Syria, Russia has ratcheted up its involvement in Libya, exploiting the chaos that has prevailed since the ouster of the North African nation’s longtime ruler, Moammar Gadhafi, in 2011. Today, militia groups run amok in a nation that has two governments—a United Nations-recognized administration in Tripoli and a rival power center in Tobruk.

“Russia first found a way to harass the Americans in Syria; this strategy is continuing in Libya,” said Karim Mezran, a resident senior fellow in the Council’s Hariri Center.

“In Libya, the Russians are playing a very smart game,” said Mezran. While Moscow officially backs Prime Minister Fayaz al-Serraj’s Government of National Accord in Tripoli, it also supports Khalifa Haftar, a powerful Libyan commander who has resisted Serraj’s government.

Russia’s plan appears to be to provide Haftar just enough military support that he is empowered to dictate terms in negotiations with the Serraj government, said Mezran. “If the Russians can have Haftar agree with Serraj on their terms, they will have cashed an incredible political victory because they will be the ones to have resolved the crisis in Libya,” he added.

Such an outcome would give Russia enormous influence across North Africa. “It is a way to harass the West,” Mezran said, noting that North Africa sits on Europe’s doorstep.

Russia has expanded its presence beyond North Africa.

Soviet troops were forced to retreat from Afghanistan in the late 1980s following an ignominious defeat at the hands of the Central Intelligence Agency-backed mujahedeen. In that same country, Russia is now supporting the Taliban.

Afghan officials are worried that such support for the Taliban with which the United States has been at war for more than fifteen years will undermine their efforts to make peace with the terrorist group.

Russian officials say their support for the Taliban is intended to keep ISIS, which has established a foothold in Afghanistan’s eastern Nangarhar province, from crossing into Russia.

“While Moscow has an interest in containing violent Islamist extremism and would not wish to see the Taliban succeed, it is undoubtedly pleased to see the United States and NATO-led coalition struggling in Afghanistan as it seeks to divide and weaken the alliance,” said James B. Cunningham, a nonresident senior fellow in the Atlantic Council’s South Asia Center and a former US ambassador to Afghanistan.

Russia’s recent opening of independent contacts with the Taliban “is harmful to our own efforts, and undercuts the Kabul government as well,” he added.

What does Putin want?

“Putin would ultimately like to make the big deal with the United States which allows him freedom of action in the former Soviet Union and the former East Bloc. What he would like is a return to the nineteenth century sphere of influence where Russia is again a dominant power in Eastern Europe and Central Asia,” said Farkas.

Getting to that goal would require the lifting of Western sanctions—imposed on Russia in response to the annexation of Crimea, as well as additional sanctions placed on the Kremlin by the US Senate for Russia’s meddling in the US election.

Farkas said that in Ukraine, Putin’s idea of victory depends on making his territorial gains permanent: “In the short term, keeping the status quo is a win for Putin. In the long term, he wants to suck Ukraine back into the orbit of the Kremlin.” In Syria, he would like to ensure Russia’s influence, and on North Korea he wants a seat at the table to negotiate an end to the ongoing nuclear crisis, she added.

Trump had championed an “America First” policy on the campaign trail.

Farkas described this approach as a “high-risk strategy and potential recipe for instability in Europe and elsewhere.”

“If we do indeed retreat and demonstrate only lukewarm commitment to our allies and partners around the world—militarily, economically, politically—other actors will step into the breach,” she said. These other actors—Russia and China, for example—are countries that “don’t play by the same rules as the United States and its democratic allies and partners,” she said.

Farkas said Trump must convey to Putin that Russia can be a great power if it steps back in line and plays by the rules it helped set up at the end of World War II.

On Ukraine, Trump must urge Russia to abide by the terms of the Minsk agreements; on Syria, he should seek cooperation with Russia while making clear that the United States does not support Moscow’s position that Assad remain indefinitely in power; and there should also be a discussion regarding strategic stability and arms control between the United States and Russia, said Farkas.

“Trump should say that he believes that there are aspects of Russia’s military modernization and doctrine that have increased the risk of miscalculation and instability in Europe, that he recognizes in part it is because of Russia’s own security concerns and that we need to sit down and initiate a dialogue about strategic stability,” she added.

Herbst said: “Coupled with its nuclear arsenal, [the] Kremlin’s revisionism makes it the greatest short term threat to US security. Washington has a vital interest in stopping Moscow’s aggression in Ukraine and deterring its aggression against any NATO members. The United States also has major interests in stopping Russian troublemaking in Afghanistan and in Syria.”

“And, of course, free and fair elections are vital to American democracy. Kremlin interference in our elections must cease,” he added.

Image: US President Donald J. Trump delivered a speech in front of the Warsaw Uprising Monument at Krasinski Square in Warsaw, Poland, on July 6. (Reuters/Kacper Pempel)