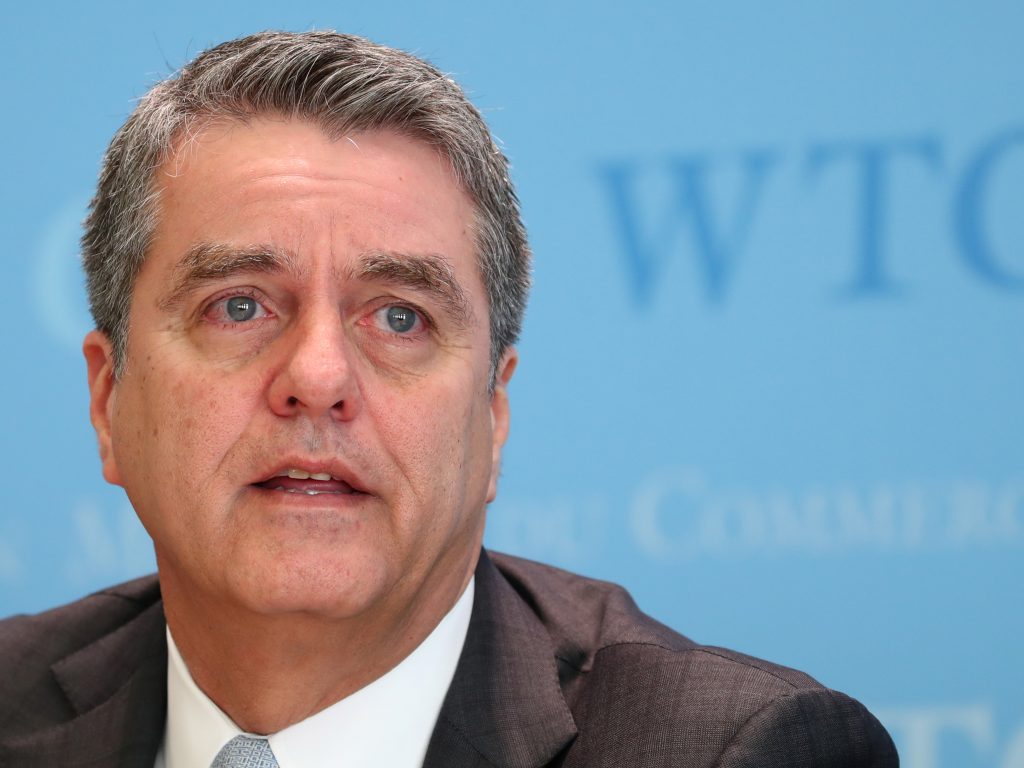 Coming up on the anniversary of the July 2018 “trade truce” between European Commission President Jean-Claude Juncker and US President Donald J. Trump, little progress has been made in trade negotiations between the United States and the European Union. This article is the third in a series that will take stock of the opportunities in and challenges to the deepest trading relationship in the world and focuses on WTO reform.

On August 30, 2018, US President Donald J. Trump went as far as to label the WTO “the single worst trade deal ever made.” He threatened that “if they don’t shape up, I would withdraw from the WTO.” In addition to these threats, the United States has blocked new appointments to the WTO’s Appellate Body, severely weakening the key dispute mechanism for the organization, which without new appointments could cease to function by December 2019.

Criticisms of the WTO by the United States and others, such as the European Union and Japan, fall into three major categories: the ability of WTO members to self-identify as “developing” countries in order to receive special treatment, the failure of many WTO members to properly notify the WTO and other WTO members of government subsidies in accordance with specific agreement rules, and alleged overreach by the Appellate Body.

Much of this criticism is directed at the actions of China, which the United States and other WTO members say is skirting WTO rules in the behavior of state-owned enterprises, dumping products, and stealing intellectual property. Touching on China in his address to the United Nations General Assembly on September 25, 2018, Trump argued that “countries were admitted to the World Trade Organization that violate every single principle on which the organization is based… We will no longer tolerate such abuse.”

The Trump administration is also concerned about a decision by the WTO’s Dispute Settlement Panel and Dispute Settlement Body that the organization’s dispute settlement bodies can determine the legality of a member state’s use of “national security” as a motivation for taking measures that are against WTO agreements. The decision was seen as opening the door to the WTO potentially ruling that the Trump administration’s steel and aluminum tariffs, enacted in March 2018 on national security grounds, are not WTO-compliant. The United States has expressed its disagreement with this decision as it argues that only states have the power to determine the validity of a national security motivation. The United States has repeatedly blocked the appointment of new judges to the WTO’s appellate body over concerns about judicial overreach in the organization.

The New Atlanticist’s David A. Wemer and Bart Oosterveld, director of the Atlantic Council’s Global Business and Economics Program and C. Boyden Gray fellow on global finance and growth, discussed the major criticisms of the WTO and possibilities for reform with Mark Linscott, a senior fellow in the Atlantic Council’s South Asia Center. Linscott served as the assistant US trade representative for World Trade Organization and Multilateral Affairs from 2012 to 2016. He also represented the United States at the US Mission to the WTO in Geneva from 1996 to 2002.

Here is an edited transcript of the interview.

Wemer: One of the many criticisms of the WTO by the United States and others is the continued use of self-designation to determine preferential status for developing countries. What are the proposed solutions to this problem and how does something like this get done in the WTO?

Linscott: This has been a perennial issue in the multilateral trading system even going back to the early days of the WTO. The present system was essentially established in the 1970s under the old GATT [the General Agreement on Tariffs and Trade], where there is special and differential treatment for members labelled “developing countries.” These members have a lesser set of obligations depending on a particular WTO agreement. Any country can essentially identify itself as a developing country and consequently take advantage of a lesser set of requirements, agreement by agreement. There are a number of situations in which legacy developing country designations have continued on. So a South Korea or a UAE continues to designate itself as a developing country, despite the fact that over a number of years, those countries have become quite developed, at least by the measure of per capita GDP.

The idea is that there should be a new system of graduation of countries from developing country status to developed country status and additionally some degree of differentiation for those countries that remain designated as developing countries. For example, larger countries that play a bigger role in the global trading system have higher expectations in terms of their obligations. Realistically, there is no serious prospect for there to be a consensus agreement in the WTO to change the current system of special and differential treatment.

But what might happen over time is a process of individual developing countries volunteering to exempt themselves or waive their status as a developing country. That is what we saw with Brazil. There was an agreement between Brazilian President Jair Bolsonaro and Trump that Brazil would not designate itself as developing country going forward in exchange for support for Brazil’s OECD [Organisation for Economic Co-operation and Development] membership. That seems like a more realistic prospect in terms of reform.

Oosterveld: There have also been complaints that some countries are not following WTO reporting requirements on subsidies. Are the rules written in a way that makes it unclear what the obligation is or are there countries that are actively skirting the rules? Is it both?

Linscott: My assessment is that it is a combination of both. There are certainly circumstances in which a number of developing countries lack institutional capacity to readily comply with notification requirements in individual agreements. A good example is the Agreement on Subsidies and Countervailing Measures, which has pretty elaborate requirements to notify the WTO of subsidies in individual countries. In many developing countries, that is a significant undertaking across their entire government to identify their full range of subsidies.

There are also circumstances in which certain developing countries are not enthusiastic about providing detailed information on their programs under certain WTO agreements. An example of that is the WTO Agriculture Agreement, in which there have been situations of delays in notification and assessments by the United States and others that there is not a full notification of information of programs that would fall under the notification requirements of the agreement. Consequently, there have, in fact, been times that the United States and other countries have counter notified programs. India is an example where the United States and some other countries have provided submissions to the WTO to identify programs that they think should have been notified by India, which were not.

Oosterveld: Is counter notifying a practice that a lot of countries engage in?

Linscott: It is really a recent phenomenon. It has mostly been used in an experimental way under the Agriculture Agreement. I think there may also be situations under the WTO Safeguards Agreement, so it is not a regular process. It has really been used on an experimental basis. There are provisions in individual agreements for counter notification, like the Agriculture Agreement. I can imagine circumstances in which it is used more frequently in the future.

Wemer: The United States has grown incredibly hostile to the WTO’s dispute settlement process and has specifically held up the Appellate Body as an example of overreach. What are the specific complaints the United States has about how this system functions?

Linscott: This is an area that has been quite high-profile in terms of reporting on WTO reform. The Trump administration and USTR have regularly raised these problems. But this was a perception that predates the Trump administration: that the Appellate Body has engaged in interpretation of WTO rules that has gone beyond its mandate as laid out in the WTO dispute settlement understanding. It is not just the United States but a number of WTO members that perceive this to be the case. Consequently, some push for reform in terms of making it more definitively clear what the Appellate Body’s mandate is. This has really played out most prominently in the area of the Appellate Body’s decisions on anti-dumping cases and countervailing duties cases.

The central question is what the scope is potentially for an agreement to reform Appellate Body practice. The United States has tried to use the process of appointing new members to the Appellate Body as leverage for pushing reform. There is, at this point in time, a lack of clarity about what the United States expects with respect to reform and how far it will go in terms of using this leverage. In December we could reach a point when there is not the required group of three Appellate Body members to hear any further appeals. A real potential crisis is in play.

Oosterveld: Are there any areas where WTO reform is proving more successful?

Linscott: There are other areas of reform that are underway that get a little less attention. That is really in the negotiating function of the WTO. There are ongoing negotiations on fishery subsidies, which was a leftover issue in the Doha Round [trade negotiations among the WTO membership]. There is a real push for a new multilateral agreement on fishery subsidies by the end of this year or certainly going into the next ministerial conference in Kazakhstan.

There has also been a strong push—limited to discussion among three members: Japan, the EU, and the United States—on industrial subsidies and tech transfer and a real focus on the other circumstances with respect to the experience since China became a [WTO] member. There is a lack of clarity about how that process would eventually be moved into a broader WTO negotiation.

Finally, there is new attention on a plurilateral process in the WTO on electronic commerce and digital trade policies. There is potentially a lot of promise in those negotiations, but huge challenges as well. There are huge gaps in positions in those plurilateral negotiations between the United States, Japan, and the EU in some respects on one hand, and China, which has a very different approach to regulation on ecommerce issues, on the other. India and South Africa are not even part of these negotiations. So big hurdles still remain.