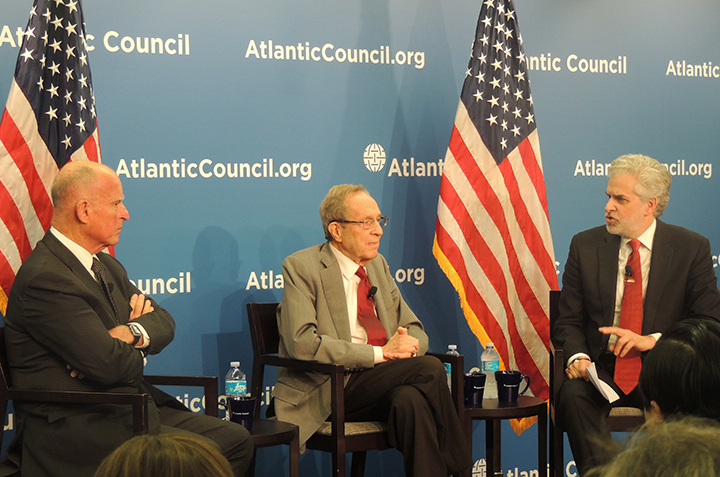 From left: California Gov. Jerry Brown and William J. Perry, a former US Secretary of Defense, participated in a discussion on nuclear security that was moderated by Barry Pavel, Director of the Atlantic Council’s Brent Scowcroft Center on International Security, on March 31. (Atlantic Council)

Positive engagement with Russia and sustained disarmament efforts must follow US President Barack Obama’s final Nuclear Security Summit in order to avoid global nuclear crises, according to a former US Secretary of Defense.

“The actions following the Nuclear Security Summits have removed quite a bit of [nuclear] material off the streets and [put them] under better control. The results gained from nuclear summits are a tremendous achievement, it just hasn’t gone far enough and I’m fearful that the progress will stop following this meeting,” said William J. Perry, who served as US Secretary of Defense in the Clinton administration.

Perry spoke on a panel with California’s Governor, Jerry Brown, at an event hosted by the Atlantic Council’s Brent Scowcroft Center for International Security on March 31. Barry Pavel, Vice President, Arnold Kanter Chair, and Director of the Scowcroft Center, moderated the discussion.

More than fifty world leaders are gathered this week in Washington for the 2016 Nuclear Security Summit, the last of Obama’s presidency. The summit wraps up on April 1. The fourth of its kind, the summit was established following Obama’s speech in Prague in 2009, in which he described nuclear terrorism as a chief threat to global security.

The 2016 summit has put a greater focus on ensuring nuclear fissile material does not end up in the hands of terrorist organizations such as the Islamic State of Iraq and al Sham (ISIS). Such concerns have been exacerbated by recent reports that ISIS may have planned to target a nuclear power plant in Belgium.

Besides the ISIS threat, recent ballistic missile tests by North Korea and maritime tensions in the South China Sea have dominated the summit. These concerns were at the top of the agenda when Obama met Chinese President Xi Jinping, South Korean President Park Geun-hye, and Japanese President Shinzo Abe at the White House on March 31.

Russia, which has the largest estimated nuclear arsenal, is not attending the summit. Iran, which reached a nuclear deal with the P5+1 countries—the United States, the United Kingdom, Russia, China, Germany, and France—last summer, was not invited.

As Brussels reels from the ISIS-sponsored March 22 attacks and the European Union questions the effectiveness of its intelligence networks and cooperation within Europe, Perry emphasized the importance of intelligence to learning when terrorists obtain fissile material.

“The key in [preventing] any terror attack is good intelligence. And in this case, the intelligence needs to be precise and focused on the location and movement of fissile material—who is trying to get it and who may have it,” Perry said.

North Korea; India; Pakistan; and Ukraine and the Baltic States, the former where Russia has annexed territory and supported separatists in the east, and the latter where a Russian threat looms, are all potential hot spots for a future nuclear crisis, according to Perry.

Despite Russia’s absence from the summit, the West’s engagement with Russian President Vladimir Putin through constructive diplomacy will be critical to maintaining global nuclear security. “Whatever the differences are, [the United States and Russia] have a common interest in preventing nuclear catastrophe. Until the US and Russian President reengage on the issue of nuclear dangers, we are not going to change the situation,” Perry contended.

“We don’t have a Cuban missile crisis but we do have Ukraine and the Baltics. We need to seriously engage Russia at the highest political levels,” he added.

“Whatever the politics are, there has to be cooperation on an international level…Without Russia and the US collaborating we are not going to be able to deal with nuclear material getting into the wrong hands,” the Governor said.

The nuclear agreement reached between Iran and the P5+1 countries in July of 2015 established a precedent for nuclear powers to partner over nuclear security and strategic disarmament.

Even with purported successes from the biennial Nuclear Security Summits and the Iran deal, Brown said nuclear security, especially with regards to fissile material falling into the hands of organizations such as ISIS, still takes a back seat when considering international security.

Brown said other political issues tend to overshadow the challenge of nuclear proliferation “blocking the focus on this existential threat.”

It remains to be seen whether Obama’s tradition of bringing world leaders together to address nuclear security issues continues once his presidential term ends.

“There should at least be vigorous public debates when these issues can have such drastic consequences for [US] security and our partners around the world,” said Pavel.