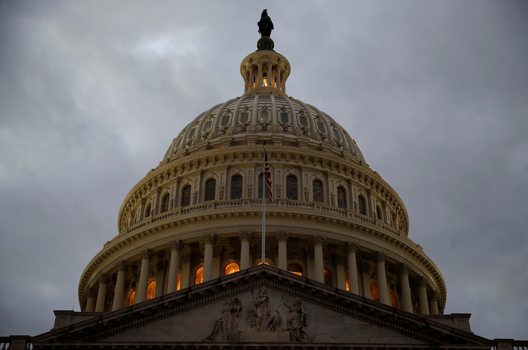 The US Capitol building is lit at dusk ahead of planned votes on tax reform in Washington, U.S., December 18, 2017. (REUTERS/Joshua Roberts)

With the dust now settled on tax reform legislation, the scale and scope of its impact on the United States’ fast-growing clean energy economy is coming more sharply into focus.

On December 22, US President Donald J. Trump signed into law a sweeping tax reform bill. While overall the bill could be categorized as less than perfect, the Republican-led effort to spur innovation and increase affordability and competition across industry is notable. Credit deserves to be given where credit is due.

The clean energy sector is emblematic of the exact type of industry tax reform should boost. Clean energy generation and storage represents a $200 billion industry that supports more than three million jobs across the United States. Further, the wind and solar sub-sectors are growing twelve times faster than the rest of the US economy.

In the broadest terms, the US Congress has enacted tax reforms to support clean energy because they will prove good for business. A reduction in the corporate tax rate and 100 percent expensing for necessary equipment, allowing businesses to write off in their taxes the full cost of materials for energy production, will drive investment in the clean energy sector.

Congress did however miss an opportunity to broaden the advance of clean energy technologies when renewable energy tax credits for emerging sub-sectors were dropped from the final agreement. Tax credits are allowances that can be used to decrease a tax liability, thereby reducing the cost of doing business for emerging industries. In addition, while the pre-existing tax credit framework remains untouched, US tax laws will become more complex for project developers seeking financing from multi-national firms.

Energy is a fundamental factor of economic growth—it is a necessary input in virtually all production and service industries, and it is a key cost driver in many high-tech, energy-intensive industries. Affordable energy reduces costs for businesses and households while boosting consumer spending, and the US natural gas boom has driven down overall domestic energy prices, while innovation and market maturation have driven down solar and wind costs.

US energy businesses eagerly await a dramatic reduction in the corporate tax rate and the allowance of 100 percent expensing included in the bill. These two reforms will ensure that domestic energy firms are more competitive internationally and can fast-track investment—especially for research and development.

Tax reform will give energy companies more flexibility and agility in competitive global markets. By immediately writing off the full cost of new equipment, businesses can make additional investments sooner, improve operations, and invest in employees and workplace training. The reforms could help re-position the United States as an exporter of the next generation of clean energy technologies.

The devil is in the details for multinationals

Historically, the tax equity market used to finance many renewable projects has been dominated by multinational firms. As a result, the shift to a territorial reporting system—where businesses are taxed only where profits are earned, instead of being taxed on all global profits—affects clean energy finance. The final bill allows financiers to take the full value of the research and development tax credits as well as 80 percent of renewable energy investment and production tax credits until 2025. This reform preserves a key form of finance for wind and solar projects, but creates uncertainty going forward by forcing annual calculations to see if the 80 percent threshold is hit by multinational tax equity financiers.

An opportunity was missed for “orphans”

An opportunity was missed to level the tax credit playing field for fuel cell, small wind energy property, microturbine, combined heat and power, and thermal energy property accidentally left out of a bi-partisan bill in 2015 and intentionally left out in this round of tax legislation. Because they were left out of the earlier bill, these technologies may be referred to as “orphans.” The US House of Representatives took a significant step forward in this tax bill by including these credits in its version of the bill and by extending tax credits for residential energy efficiency property and modified for advanced nuclear power facilities. However, these elements were not included in the final tax bill. These additional clean energy tax credits—and their planned sunset schedules—would have created parity among energy generation technologies and fair competition in the short-term for industries that show economic promise and environmental benefit. These reforms should be taken up in other legislation.

Outlook: US clean energy will continue to surge after an unnecessary interruption

The new tax reform bill provides stability for businesses and investors in the solar and wind sector by maintaining the existing tax credit framework. These industries have been surging for years and will continue to do so in 2018 after an unnecessary interruption stemming from the months-long public negotiation of the tax bill. In business, predictability and certainty mean steady financial planning and making deals. Unfortunately, many solar and wind projects were put on hold because of the uncertainty created by the negotiation of the legislation. Hopefully these projects will be back on track soon.

Ultimately, financiers and project developers in the clean energy field will better understand the impacts of tax reform and adapt their practices on a case-by-case basis over the next year. The lower corporate tax rate and ability to write off capital investments will allow natural gas companies to grow exports and improve the US position in international energy markets. US natural gas could find buyers in the Middle East as countries look to meet surging domestic demand. Indeed, the United States’ vast natural gas production capacity and growing role as an exporter means US businesses will be at the forefront of the global marketplace.

Furthermore, as planned, production and investment tax credits for solar and wind projects will phase out by 2020. Mature markets do not need help from Uncle Sam.

This reform will be remembered as a turning point for clean energy because of the groups that came together to shape the outcome. Thanks to outspoken industry advocates, investors, and conservative groups with good relationships with Republicans in the House and Senate, disasters were avoided and the outlook for clean energy remains bright.

Charles Hernick is the director of policy and advocacy at Citizens for Responsible Energy Solutions (CRES) Forum, a nonpartisan, nonprofit organization committed to educating the public and influencing the national conversation about clean energy.