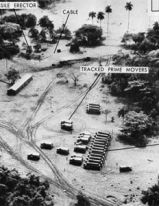 Bob Schieffer of CBS News struck the right note when he opened this week’s presidential debate on foreign policy by reminding viewers it was “the 50th anniversary of the night that President Kennedy told the world that the Soviet Union had installed nuclear missiles in Cuba, perhaps the closest we’ve ever come to nuclear war.” He called it “a sobering reminder that every president faces at some point an unexpected threat to our national security from abroad.”

After setting the stage, however, Schieffer missed an opportunity to ask an important follow-up: As commander-in-chief, what lessons would President Barack Obama and Governor Mitt Romney draw from the Cuban missile crisis? Did they agree with Graham Allison — whose Essence of Decision is one of the most popular books on the crisis — that today’s effort to prevent a nuclear-armed Iran is “a Cuban missile crisis in slow motion”? Allison said recently in an NPR interview that we are heading “inexorably toward a confrontation at which an American president is going to have to choose between attacking Iran to prevent it becoming a nuclear weapons state or acquiescing and then confronting a nuclear weapons state.”

The wrong conclusions drawn from the Cuban missile crisis, perhaps the most studied foreign policy event in American history, have misguided U.S. leaders ever since the Kennedy administration.

On one side stand those like Leslie Gelb, who wrote for Foreign Policy about “The Myth that Screwed Up 50 Years of U.S. Foreign Policy.” He argues that by promulgating the argument that Kennedy forced Khrushchev to capitulate in Cuba “by virtue of U.S. military superiority and his steely will,” we’ve created a culture that eschews compromise and has led to misadventures from Vietnam to Iraq. In fact, argues Gelb, it was mutual concessions that ended the crisis:

The crisis concluded not with Moscow’s unconditional diplomatic whimper, but with mutual concessions. The Soviets withdrew their missiles from Cuba in return for U.S. pledges not to invade Fidel Castro’s island and to remove Jupiter missiles from Turkey.

In his rebuttal to Gelb, Stephen Sestanovich of Columbia University argued:

American concessions were simply not the key to resolving the crisis. It’s obviously inconvenient for anyone who favors a calm, compromising approach to the conduct of U.S. foreign policy, but the truth is that what softened Khrushchev up – unhinged him, really, was the threat of U.S. military action.

The problem with both these arguments is they focus too much on the details of the 13-day crisis, which lasted from Oct. 16-29, 1962, and not enough on what Soviet leader Nikita Khrushchev had seen in the first two years of the Kennedy administration that made him willing to risk placing atomic weapons for the first time within 15 minutes of Washington. In the storm of commentary that has accompanied this week’s anniversary, what all the pundits and historians have missed is one indisputable fact: Berlin caused Cuba.

It was Khrushchev’s perception of Kennedy, gained during the various stages of the Berlin crisis of 1961 (resulting in the border closure and construction of the Berlin Wall in August), that convinced him that the president would acquiesce to missile deployment in Cuba a little more than a year later.

In April of 1961, Khrushchev watched in happy disbelief as Kennedy botched the Bay of Pigs fiasco, neither discarding the mission (hatched by the Eisenhower administration) by CIA-backed Cuban exiles to remove Fidel Castro from power, nor giving it the teeth to succeed. As he said to his son Sergei at the time, “I don’t understand Kennedy. Can he really be that indecisive?” Khrushchev drew the comparison with his own more resolute and bloody response to the Hungarian uprising of 1956.

Six weeks later at their Vienna Summit, which the Soviet leader agreed to only after the Bay of Pigs debacle, Khrushchev so shocked Kennedy with his threats of war and his challenges to U.S. post-war rights in Berlin, that the president told New York Times writer James Reston it was the “worst day of my life.” Regarding his Cuban misadventure, he told Reston the Soviet leader “thought anyone who was so young and inexperienced to get into that mess could be taken. And anyone who got into it and didn’t see it through had no guts. He just beat the hell out of me,” he told Reston. “I’ve got a real problem.”

Kennedy was right. In August of 1961, just two months after the Vienna Summit, Kennedy acquiesced to the Berlin border closure, famously saying he preferred a Wall to a war. He believed that by allowing Khrushchev to shut down Berlin’s border, resolving the refugee flood that threatened East Germany and the Soviet empire, he would gain a more cooperative negotiating partner on nuclear weapons issues. Instead, Khrushchev followed with the resumption of nuclear testing and the Cuban Missile Crisis.

As I argue in the epilogue of my book, Berlin 1961: Kennedy, Khrushchev and the Most Dangerous Place on Earth:

Critics called Khrushchev’s scheme to put nuclear missiles in Cuba a reckless gamble, but from the Soviet leader’s perspective it was a calculated risk based on what he knew of Kennedy. At the end of 1961, he told a group of Soviet officials he had learned Kennedy would do almost everything to avoid nuclear war. “I know for certain,” he had said, “that Kennedy doesn’t have a strong background, nor, generally speaking, does he have the courage to stand up to a serious challenge.” Regarding Cuba, he told his son Sergei that Kennedy “would make a fuss, make more of a fuss, and then agree” to the deployments.

The lesson for presidents past and future is a crucial one. American leaders’ greatest chance of avoiding war is through clear and consistent communication with adversaries, reducing the chance of unwanted conflict through miscalculation or misunderstanding. Khrushchev only risked deploying atomic weapons in Cuba because he had grown confident that he could get away with it.

Cuba’s lesson for Iran, Allison argues, is in the risk of ignoring the importance of communication: “Don’t let this reach the point of confrontation. The risks of catastrophe are too great.”

Fred Kempe is the president and CEO of the Atlantic Council. This column was originally published by Reuters.