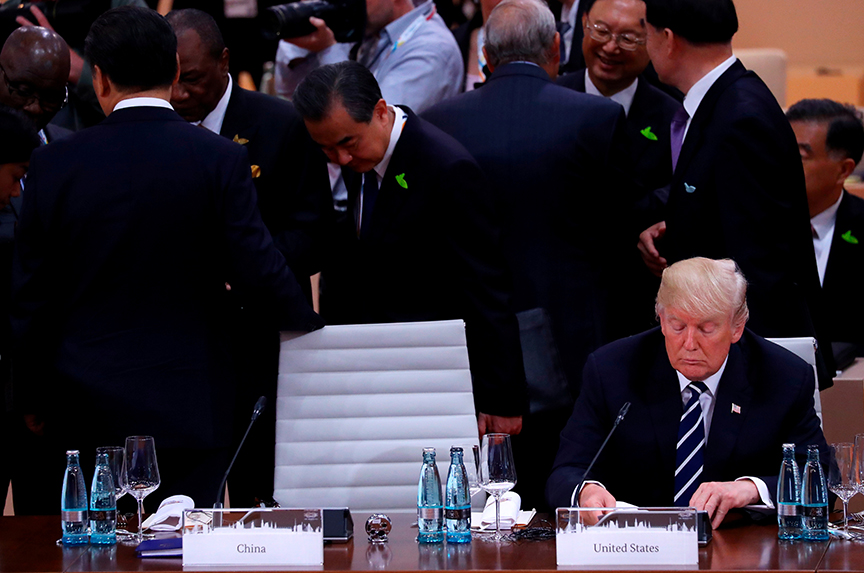 News coming out of the G20 Summit in Hamburg, Germany, on July 7 and 8 focused on the predictable and predetermined US refusal to join the consensus on the Paris Agreement. Beyond the headlines, the more important takeaways may be that the US position actually strengthened international climate consensus, the international position on the role of natural gas in energy transition is maturing, and the contours of a US policy on energy and climate have begun to emerge.

These three reflections are worth considering.

1.     The Paris consensus was strengthened.  Ironically, the US insistence that the G20 take note of the US withdrawal from the Paris Agreement liberated the other nineteen countries to more forcefully declare their adherence to the climate accord. Despite fears that Russia, Saudi Arabia or Indonesia would take US President Donald J. Trump’s intransigence as an opportunity to weaken support for Paris, none did. The communique issued by the participants labeled the agreement “irreversible” and reiterated the need to provide resources to support implementation. The countries also agreed to the G20 Hamburg Climate and Energy Action Plan for Growth (Action Plan), a robust program of cooperation on energy efficiency, research and development, and carbon emissions reduction strategies, including the Obama era-inspired Mission Innovation. The Action Plan took note of the G20’s Task Force on Climate-Related Financial Disclosures and its recommendations on voluntary disclosure. Commitments to eliminate “inefficient fossil fuel subsidies” and “advance the effective implementation of international standards on transparency and beneficial ownership” were also retained.

2.     Natural gas gets a shout out.  The Action Plan, which was not endorsed by the United States, contains provisions that align with the Trump administration’s interests. The Action Plan recognizes that “natural gas can play an important role in the energy transition” both to reduce greenhouse gas emissions and “providing increased flexibility for the integration of variable renewable energy.”  This is an evolution of the “renewables only” ideology reflected in previous multilateral statements on energy and climate. Aided by the International Energy Agency’s (IEA) recent work on gas security, the communique committed the G20 (or nineteen in this case) “to improve the functioning, transparency, and competitiveness of gas markets, with a strategic view of the gas supply chain, including LNG at the global level.” In the text of the communique itself, in a potential nod to support for cooperation on carbon sequestration and access to LNG infrastructure, the United States succeeded in including a provision committing it to help other countries “access fossil fuels more cleanly and efficiently and help deploy renewable and other clean energy sources.”

3.     The United States hints at a climate policy.  Trump officials have, in the past week, twice hinted at a new US approach to energy and climate. Last week, National Security Adviser H.R. McMaster declared that in the wake of Trump’s decision to withdraw from the Paris Agreement, the administration is developing an “energy and climate strategy” which will be unveiled later this year. And in the G20 communique, the United States purported to affirm “its strong commitment to an approach that lowers emissions while supporting economic growth and improving energy security needs.”

While no details have been offered, the language that the United States was willing to accept in Hamburg may provide some indication of the Trump administration’s climate policy. The United States supported G20 language to “remain collectively committed to mitigate greenhouse gas emissions,” to “work towards low greenhouse-gas emission energy systems” and to “work on open, flexible, and transparent markets for energy commodities and technologies.” While the United States did not join the report in endorsing the Green Climate Fund or Global Environment Facility, it did “welcome international cooperation on the development, deployment, and commercialization of sustainable and clean energy technologies and support financing by Multilateral Development Banks to promote universal access to affordable, reliable, sustainable and clean energy.”

However, while these insights are important—and perhaps surprising—it is also critical to distinguish between rhetoric and reality. Communiques from multilateral meetings are aspirational documents, not binding commitments. US agreement to language endorsing a rules-based trading system, supporting the missions of the Organisation for Economic Co-operation and Development, the World Trade Organization, and United Nations-based organizations like the World Health Organization or calls for lower carbon energy systems are not reliable predictors of policy. However, they may offer insight into the boundaries or contours of what the Trump administration is willing to live with.

Based on the G20 language, one can imagine a Trump energy and climate policy that balances energy security, energy transition, and US prosperity. Beyond support for US exports of natural resources and technology, this policy could include credible funding for Department of Energy programs on energy efficiency, renewables and carbon sequestration, sustained support for Mission Innovation, Multilateral Development Bank funding for LNG infrastructure as well as clean energy technology, funding, and support for international organizations such as the IEA and the International Renewable Energy Agency (IRENA) and expansion of US technical support for developing countries’ energy transition.

Keeping in mind these observations, the true indicators of the Trump administration’s commitment to energy and climate policy will be budget and personnel. It remains to be seen whether and how the administration funds the international organizations to which the United States belongs, along with Department of Energy programs in energy efficiency, renewables, and carbon capture, and whether qualified individuals are appointed to sub-cabinet-level positions in energy and environment at the Departments of State and Energy.

In the meantime, it is clear that the rest of the world is moving on without the United States, accelerating the global pace on the road to a lower carbon energy economy. Meanwhile, the United States has paused to bushwhack another path, destination unknown.

David L. Goldwyn is the chairman of the Atlantic Council’s Energy Advisory Board. He has served as assistant secretary of energy for international affairs and special envoy and coordinator for international energy at the US Department of State.

Image: US President Donald J. Trump sat alone at the table during the working session of the G20 leaders’ summit in Hamburg, Germany, on July 7. (Reuters/Kai Pfaffenbach)