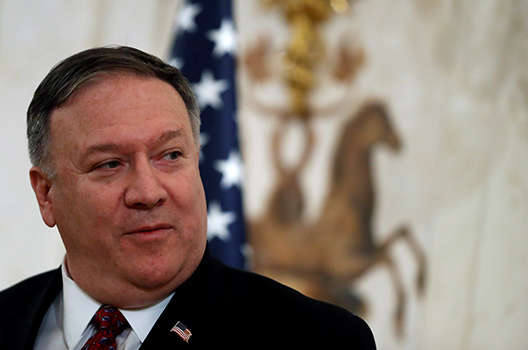 US Vice President Mike Pence and Secretary of State Mike Pompeo will be in Warsaw on February 13 and 14 for a summit on the Middle East co-hosted by the United States and Poland. The summit, named a “Ministerial to Promote a Future of Peace and Security in the Middle East,” will reportedly “address a range of critical issues including terrorism and extremism, missile development and proliferation, maritime trade and security, and threats posed by proxy groups across the region,” according to a joint US-Polish statement.

Although Pompeo specifically said in January that the summit would include talks on how to make “sure that Iran is not a destabilizing influence” in the Middle East, US officials have walked back the framing of the summit as focused on Iran. The initial announcement of the summit prompted Iran to summon a senior Polish diplomat to express its anger at Warsaw for agreeing to co-host the gathering.

The Trump administration has made containment and criticism of Iran a focal point of its foreign policy strategy. The United States withdrew from the Iran nuclear deal—known as the Joint Comprehensive Plan of Action—in May 2018 due to US President Donald J. Trump’s view that it did not sufficiently deter Tehran from giving up its nuclear program, nor significant curb Iran’s support of terror in the region. During his State of the Union address on February 5, Trump promised that the United States “will not avert our eyes from a regime that chants death to America and threatens genocide against the Jewish people.”

Disapproval of the US move to withdraw from the JCPOA and the re-imposition of sanctions on Iran led many European allies to temper their participation in the February 13 summit. Federica Mogherini, the European Union’s top foreign policy official, will not be attending; the United Kingdom’s foreign secretary will be leaving early; while France and Germany are only sending junior ministers or civil servants.

In addition to criticism over the expected discussion of Iran, Palestinian officials have asked Arab states to boycott the meeting as they fear it will be used to push for a new peace deal endorsed by the Trump administration and Israel, whose prime minister, Benjamin Netanyahu, will be in attendance.

Atlantic Council experts shared their views on the upcoming summit and its potential implications for the region:

“I’m not looking for the summit to accomplish much. Secretary Pompeo has been forced to backtrack from initial comments suggesting that a more aggressive posture toward Iran would be the focus of the summit—otherwise he would have faced a boycott from many European countries that are struggling to salvage the 2015 nuclear deal.

“On the Arab-Israeli conflict, I am also not holding my breath. No Palestinian leaders are coming. Israeli Prime Minister Netanyahu will be attending; his goal is to rub shoulders with Arab leaders who share his antipathy toward Tehran.  However, the continuing crisis in the Gulf Cooperation Council because of the boycott of Qatar and the growing chorus in the United States against Saudi Arabia over both the Yemen war and the murder of journalist Jamal Khashoggi would seem to preclude a more cohesive anti-Iran alliance.”

William F. Wechsler, senior adviser for Middle East programs at the Atlantic Council and interim director of the Rafik Hariri Center for the Middle East.

“The United States is hoping to isolate Iran by demonstrating that the world, or a least a substantial part of the world, supports the US challenge to Iran’s malign activities. The announced subject of the conference itself is the region as a whole, but the Trump administration has made clear its intention to use this venue to focus primarily on Iran. US goals will be publicly framed as changing Iran’s behavior rather than its regime, because otherwise many European governments would not be willing to attend.  As it is, several have nevertheless chosen to downgrade the level of their participation.

“The outcome is likely to be the formation of several sets of recommendations and the establishment of various working groups to combat threats from cyber war, terrorism (mainly Iranian proxies), ballistic missile development (including the proliferation of Iranian weapons to proxies in Yemen, Syria, and Lebanon), as well as improve human rights and maritime security (most notably from the Iranian threat to the Persian Gulf and the Strait of Hormuz). As with all such announcements, the impact will depend on the implementation.

The world will also be watching to see if Israeli Prime Minister Benjamin Netanyahu (the only head of government scheduled to attend) will meet in private or public with any of the representatives of the ten Arab states that should be there: Saudi Arabia, the UAE, Oman (where Bibi visited in October), Egypt, Bahrain, Kuwait, Yemen, Jordan, Morocco, and Tunisia. Qatar, Lebanon, Iraq, Algeria and the Palestinians will be staying at home. Turkey will be meeting with Iran in Russia to discuss Syria.”

Matthew Kroenig, deputy director for strategy in the Atlantic Council’s Scowcroft Center for Strategy and Security.

“The Trump administration’s decision to withdraw from the Iran nuclear deal created tensions in transatlantic relations, but Iran’s recent attempts to sponsor terror attacks in Europe, combined with its advancing missile program has returned attention to the security threats posed by Iran. This conference will be an important opportunity for the United States to bring together its European allies and Middle Eastern partners to discuss a unified approach.”

Holly Dagres, nonresident fellow with the Middle East Security Initiative at the Atlantic Council’s Scowcroft Center for Strategy and Security and the editor of the IranSource blog
“The Trump administration waffled about the aims of the conference. But the truth is this conference is very much about Iran and a symbolic act to show that the world is united again Tehran—particularly Arab countries and Israel. The Poland Summit will accomplish little, and is nothing more than a photo op. I wouldn’t be surprised if we found Arab representatives standing beside Israeli Prime Benjamin Minister Benjamin Netanyahu.”