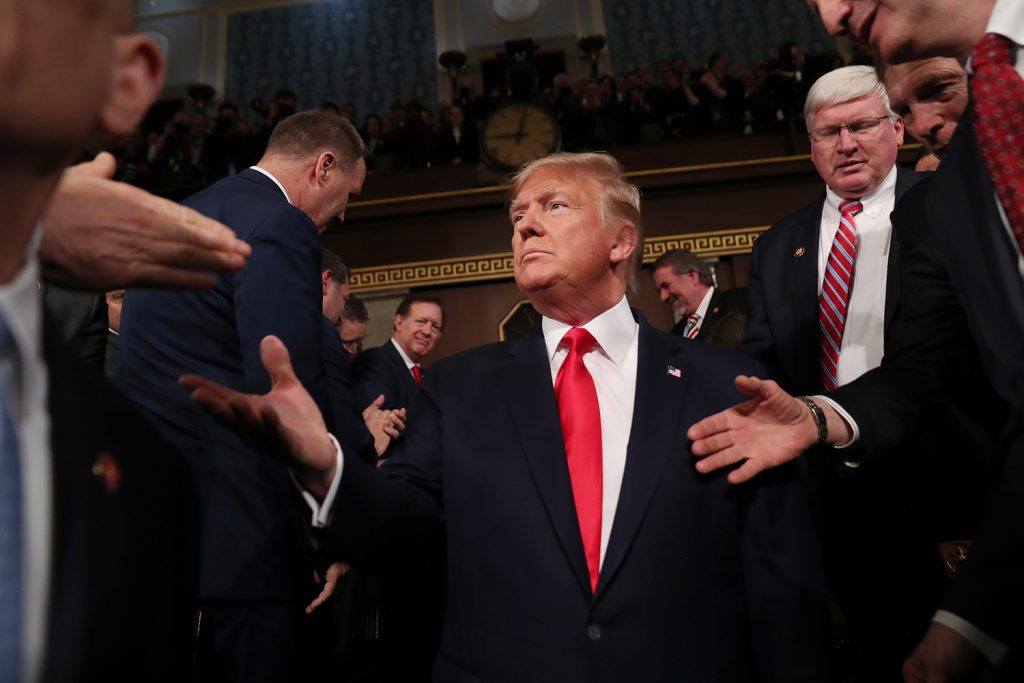 US President Donald J. Trump used his third State of the Union address to argue that his administration has “launched the great American comeback” through its economic policies and tough international stances. In a speech that focused heavily on domestic issues, his discussion of foreign policy mainly highlighted what he believed to be his major foreign policy successes, rather than announcements of new plans.

Here is a quick look at the main foreign policy highlights from Trump’s speech and what his remarks could mean for future US policy:

The US president continued his steadfast support for Venezuela’s National Assembly as they fight to dislodge the regime of Nicolas Maduro. Trump argued that Maduro “is an illegitimate ruler, a tyrant who abuses his people,” but promised that “his tyranny will be smashed and broken.”

Interim President Juan Guaidó attended the speech in person, and the US president described him as “a very brave man who carries with him the hopes, dreams, and aspirations of all Venezuelans.” Trump told Guaidó to tell his countrymen that “all Americans are united with the Venezuelan people in their righteous struggle for freedom.” Jason Marczak,director of the Atlantic Council’s Adrienne Arsht Latin America Center, said that Guaidó’s attendance was “an important recognition of US support for Guaidó and the interim government.”

Marczak argued that this support, “must continue to be bipartisan” as “2020 will be even more critical in Venezuela than 2019.” Diego Area, associate director of the Adrienne Arsht Latin America Center, agreed, pointing out that the “standing ovation from both sides of the aisle” for Guaidó was evidence that “Venezuela stood out as one of the few issues with true US bipartisan support.”

Marczak warned that the United States must remember this show of support in the days ahead “as Maduro will undoubtedly continue in his quest in these next few months to dismantle Venezuela’s last remaining democratic institution through elections that will surely be fraudulent.”

While the show of support for Guaidó was welcome, Marczak was also concerned that there was no new announcement of support measures from the US president. “Guaidó’s presence could have also been an opportunity to announce new policy measures that would further support Venezuelans in their quest for freedom and democracy,” Marczak said. “That opportunity was missed.”

Within a larger section on illegal immigration, Trump highlighted the cooperation his administration has pursued with Central American countries to stem the flow of migrants towards the United States. He celebrated “historic cooperation agreements with the government of Mexico, Honduras, El Salvador, and Guatemala,” which he argued have cut “illegal crossings” into the United States by “75 percent since May, dropping eight months in a row.” Maria Fernanda Perez Arguello,an associate director of the Atlantic Council’s Adrienne Arsht Latin America Center, explained however that this cooperation was often forced by threatened US action as “Guatemala was pressured to sign a safe third country agreement after Trump threatened to implement higher remittance taxes and block all Guatemalan immigrants [to the United States.]” She added that “without in-country economic opportunities, strengthened institutions, and the rule of law, and significantly improved security in El Salvador, Guatemala, and Honduras, Central American migration will continue.”

Trump celebrated the successful passage of the United States-Mexico-Canada Trade Agreement (USMCA), which he signed into law on January 29 and now only awaits ratification in Canada to come into effect. The USMCA was intended to update the North American Free Trade Agreement (NAFTA) which Trump argued disadvantaged the United States. He said on February 4 that replacing NAFTA was “one of the biggest promises I made to the American people.” He argued that the new USMCA deal would “create nearly 100,000 new high-paying American auto jobs and massively boost exports for our farmers, ranchers, and factory workers.” He also claimed that the deal would add “a much greater degree of fairness and reciprocity” to the US-Mexico-Canada trading relationship and “the first major trade deal in many years to earn the strong backing of America’s labor unions.” Jason Marczak said that along with labor union support, USMCA’s success was also due to the extensive “negotiations across the political aisle and the support of Mexico.”

Trump also trumpeted his economic strategy towards China, which his administration has attempted to pressure into altering its unfair economic practices, including forced technology transfer, state subsides, and currency manipulation. After months of negotiation and escalating tariffs and counter tariffs, US and Chinese negotiators agreed to a “phase one” trade agreement which saw the US withdraw threatened tariffs in return for increased Chinese purchases of US goods. Trump lauded this deal as a “groundbreaking new agreement with China that will defend our workers protect our intellectual property, bring billions of dollars into our treasury, and open vast new markets for products made and grown here in the USA.”

Trump claimed that his administration now enjoys “the best relationship we have ever had with China, including President Xi [Jinping],” because the Chinese government “respect what we have done.” Trump argued that this respect extends to all of his dealings with foreign leaders, saying that “the days of our country being used, taken advantage of, and even scorned by other nations are long behind us.” He said the results have shown that “our country is thriving and highly respected again.” Graham Brookie, director and managing editor of the Atlantic Council’s Digital Forensic Research Lab (DFRLab), noted, however, that despite Trump’s claims, “the most recent measures from Pew Research of international trust in Trump’s handling of international affairs and support for Trump’s foreign policy found both trending significantly downward.”

Following a month that saw tensions between Iran and the United States escalate, Trump argued that he is “working to end America’s wars in the Middle East.” He highlighted the release of his plan for a peace agreement between Israel and the Palestinians, which he described as “groundbreaking,” despite acknowledging that “all [other] past attempts have failed.” He lauded the successful killings of both ISIS leader Abu Bakr al-Baghdadi, who the US president called “a bloodthirsty killer,” and Iranian General Qasem Soleimani, who Trump labelled as “the most ruthless butcher,” responsible for numerous US servicemember deaths in Iraq. The targeting of Soleimani triggered a missile attack on bases housing US troops in January by Iran and also led the Iraqi parliament to call for the removal of US troops, but Trump argued that it was justified as Soleimani “was actively planning new attacks.”

Trump said that the “the Iranian regime must abandon its pursuit of weapons of mass destruction and needs to work for the good of its own people,” while acknowledging the continued protests of “proud Iranians” against the regime. He argued that his administration’s new sanctions on Iran—levied after the US withdrawal from the 2012 nuclear deal—have cause the Iranian economy to “[do] very poorly.” Should Tehran reverse its course toward nuclear weapons and support for terrorism, however, Trump promised that the United States can help the Iranian economy “make a very good and short recovery. It can all go quickly…it is totally up to them.”

Barbara Slavin, director of the Atlantic Council’s Future of Iran Initiative, observed that Trump’s “language seemed intended to further offend Iranian officials, who have said they will not return to negotiations without sanctions relief up front.” According to Slavin, “prospects for diplomacy between the US and Iran between now and US presidential elections are dim.”

Trump also noted that there has been “tremendous progress” towards ending the conflict in Afghanistan and that “peace talks are underway.” A potential summit with Afghan leaders and representatives of the Taliban in September was cancelled after the death of a US soldier attributed to the Taliban. During his State of the Union speech, however, Trump said that he is “not looking to kill hundreds of thousands of people in Afghanistan,” nor is it also the United States’ function to serve other nations as law enforcement agencies.” He promised that his administration is “working to finally end America’s longest war and bring our troops back home.”

Trump noted the United States’ ascent to becoming “the number one producer of oil and natural gas anywhere in the world, by far,” adding that “America is now energy independent.” According to Jennifer Gordon, managing editor and senior fellow in the Atlantic Council’s Global Energy Center, Trump’s speech shows that “even though the Trump administration deals with a range of energy sources—and has had notable successes on nuclear energy legislation—it is clear that, for Trump himself, energy primarily constitutes oil and gas.” Additionally, while Trump touted the United States progress towards being energy independent, it “still imports roughly 5 percent of its “overall domestic oil consumption” from Persian Gulf countries, and it cannot claim full energy independence,” Gordon said.

Outside of a nod to his administration’s participation in the “1 Trillion Trees Initiative” there was no mention of climate change or environmental policy in the speech. This omission “suggests that climate change denial no longer animates the Republican base like it used to,” Randolph Bell, director of the Atlantic Council’s Global Energy Center and Richard Morningstar Chair for Global Energy Security said. The fact that Trump did not engage in any climate change denial—even if he didn’t mention it at all—is a sign that while “Republicans have no appetite for a Green New deal, they likely won’t be bringing snowballs to the Senate floor as proof that climate change isn’t real anymore,” Bell argued.

David Livingston, deputy director for climate and advanced energy in the Atlantic Council’s Global Energy Center, said that while the United States’ climb to the top of oil and natural gas production is a sign that “it can be a leader in innovation in the energy sector,” it must now “use that power of innovation to deliver on a net- zero economy by mid-century.” But to make that push serious, the United States needs to “embrace a rhetoric and reality focused on technological and policy advances to bend the global emissions curve, rather than just offsetting business as usual with tree planting commitments that may or may not materialize,” referencing Trump’s 1 Trillion Trees promise. Gordon added that “Trump views regulation as the enemy of energy production. However, this is an overly simplified perspective, since regulation and innovation are two sides of the same coin, and useful innovation is impossible without smart regulation.”

Livingston said that US climate leadership can been “an incredible wealth creation opportunity but will require ambitious and bold thinking that goes beyond business as usual.”

Trump celebrated his administration’s increased commitment to investing in the United States’ defense, lauding “a record-breaking $2.2 trillion” defense investment into the US military and the creation of the new Space Force branch to coordinate US space defense activities.

On the heels of NATO’s 75th birthday in April, Trump said that his continued criticisms of NATO member states for not spending enough on their defense is having an effect. He noted that NATO members have now increased their commitments by over $400 billion “and the number of allies meeting the minimum obligations [for defense spending] has more than doubled.”

Finally, despite rapt global attention on the spread of the new coronavirus strain in China, Trump made no major announcements on US activity on the crisis. He reported to Congress that his administration is “coordinating with the Chinese government and working closely together on the coronavirus outbreak in China. My administration will take all necessary steps to safeguard our citizens from this threat.”

Image: U.S. President Donald Trump is greeted by members of Congress as he arrives to deliver his State of the Union address to a joint session of the U.S. Congress in the House Chamber of the U.S. Capitol in Washington, U.S. February 4, 2020. REUTERS/Leah Millis/POOL