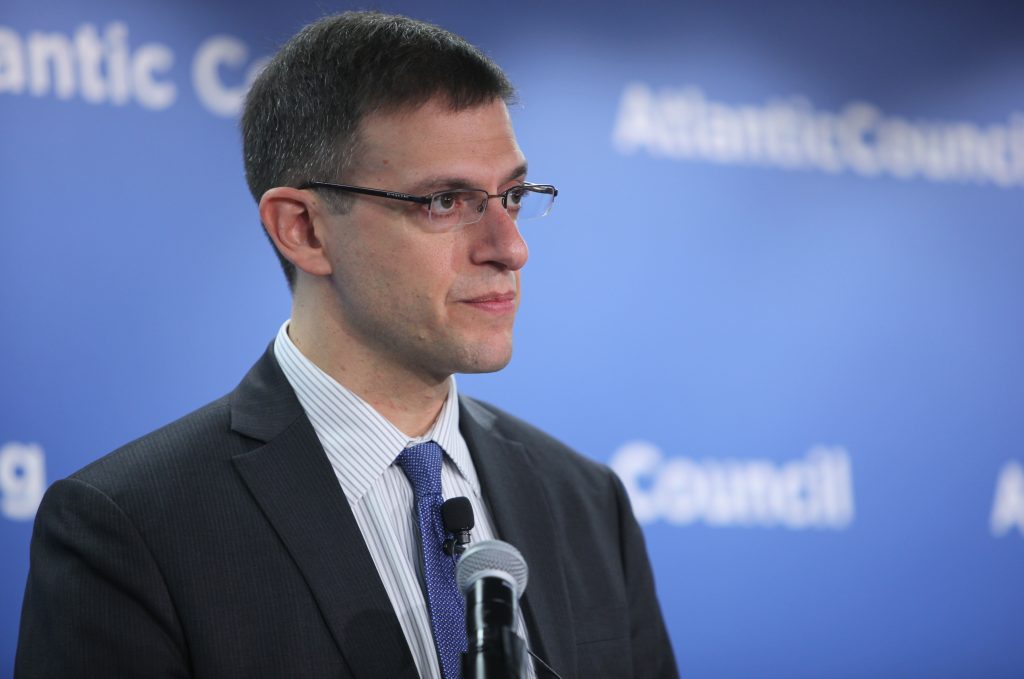 US embargo will, ‘by and large,’ remain in place, says US Treasury official

Even after US, EU, and UN sanctions have been lifted, Americans thinking of doing business in Iran will be restrained by other US sanctions and prohibited from dealing with blacklisted Iranian officials and entities, a top Obama administration official said at the Atlantic Council on December 17.

The possibility of “snapback”—sanctions being re-imposed in the event Iran were not to abide by its obligations under the nuclear deal reached in July—would also be cause for caution for those looking to reap business opportunities in the Islamic Republic.

“It would be fair to say that the US embargo on Iran, by and large, is remaining in place,” said Adam Szubin, Acting Under Secretary for Terrorism and Financial Intelligence in the US Department of Treasury. “That needs to be borne in mind, of course, for US companies, but also for foreign companies insofar as they are considering the re-export of US-controlled goods or insofar as they are considering international trade in the dollar, which by and large transits US banks and will be prohibited.”

The Associated Press reported that the Obama administration could start to lift some sanctions as early as January.

US sanctions that were imposed in response to Iranian support for terrorist groups such as Hezbollah, Syria’s embattled President Bashar al-Assad, and its violation of human rights will continue to prohibit US citizens from engaging in almost all transactions with Iran, especially its government and banks.

Iran and the P5+1 countries—the United States, the United Kingdom, France, Russia, China, and Germany—reached an agreement in July that lifts sanctions in exchange for the Islamic Republic rolling back its nuclear program.

The nuclear deal—known as the Joint Comprehensive Plan of Action (JPCOA)—is the best possible way to prevent “what we all feared as a nightmare scenario: a state sponsor of terrorism coming into possession of a military nuclear weapon,” said Szubin.

While it is focused on implementation of the nuclear deal, the international community is also attentive to Iran’s destabilizing activities in its neighborhood, particularly support for terrorist groups and the Assad regime in Syria, he added.

Szubin participated in a daylong conference hosted by the Atlantic Council and the Iran Project.

Szubin described the nuclear deal as “frontloaded” because it requires Iran to take all the necessary steps to curb its nuclear program upfront and in exchange the P5+1 will provide substantial sanctions relief.

The United States, the European Union, and the United Nations Security Council will lift “a huge array of sanctions” once the United Nations’ nuclear watchdog, the International Atomic Energy Agency (IAEA), has verified that Iran has fulfilled all its commitments under the deal.

“If Iran meets its commitments under the deal, I want to be absolutely clear that we will meet all of ours in letter and in spirit,” said Szubin.

“The US government, US Treasury, does not intend to stand in the way of permissible business,” he added.

Treasury’s Office of Foreign Assets Control (OFAC) will publish guidance so companies can better understand how sanctions will be lifted and prepare for implementation day.

The Iranian Revolutionary Guard Corps (IRGC) and the IRGC Quds Force sit at the top of a US sanctions list, unrelated to Iran’s nuclear program, that will remain.

“There are very few international firms that have any intention of doing business with Hezbollah or Qasem Soleimani, the commander of the Quds Force,” said Szubin. “The commercial realities though set in when you look at the companies that these entities control or that have been designated as front companies” for the designated entities and individuals.

US sanctions will also remain on Mahan Air, which Szubin said is the “primary carrier of choice” for the Quds Force to deliver weapons to Yemen and Syria. “They use the exact same passenger aircraft for those military shipments as they do to carry passengers into and out of airports both in Europe, in the Gulf, and in Asia,” he added.

Similarly, Bank Saderat, which was designated for moving money to Hezbollah, and Khatam-al Anbiya, an IRGC-owned construction firm, will remain on a US list of about 200 designated individuals and companies.

On the issue of “snapback” of sanctions, Szubin said this was an area of potential caution for investors.

A snapback of sanctions would represent a failure of the nuclear deal, said Szubin. Noting criticism that this provision is too blunt of an instrument, he added that the P5+1 is prepared with proportional, calibrated responses to respond to minor Iranian violations.

“Should Iran deviate and refuse to cure, that’s where the restoration of sanctions may be necessary,” he said. “It is not in anyone’s interests to punish a small violation by tearing up the agreement and walking away from our commitments.”

The lifting of sanctions on Iran will bring three main changes—the United States will authorize the re-export, sale, or lease of US-origin commercial passenger aircraft, parts, and services to Iran to help improve air safety; the import into the US of Iranian carpets and foodstuff will be permitted; and foreign subsidiaries of US parents will be authorized to conditionally engage in specific activities with Iran, said Szubin.

Non-US parties will be able to purchase unlimited amounts of crude oil and gas from Iran without the risk of US sanctions; the United States will not sanction foreign investment by non-US persons in key Iranian sectors, including the energy sector; and Iran will regain access to the international financial system—its central bank will be allowed to move money and access its reserves.

Crippling international sanctions achieved their intended goal with Iran, said Szubin, noting that Iranian President Hassan Rouhani’s election and the Islamic Republic’s decision to negotiate a nuclear deal would not have happened in the absence of sanctions.

“Our sanctions with respect to Iran were not an attempt to punish them or to vent anger, but an attempt to achieve change,” said Szubin. “The ultimate success of any sanctions program is to see its demise.”

Image: “It would be fair to say that the US embargo on Iran, by and large, is remaining in place,” said Adam Szubin, Acting Under Secretary for Terrorism and Financial Intelligence in the US Department of Treasury. (Atlantic Council/Victoria Langton)