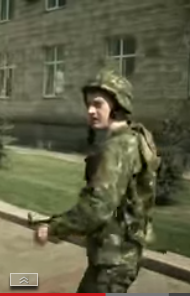 How have pro-Russian militants taken over city halls and police stations across eastern Ukraine with such surprising ease? Ukrainian journalist Valentyn Chernyavsky decided to test that question in his hometown, the provincial capital of Cherkasy, about 125 miles south of Kyiv. He donned the uniform of a Russian separatist militant, grabbed a (fake but realistic) AK-47 assault rifle and got a friend to drive him downtown to explore his chances of seizing power.

Chernyavsky’s six-minute, Ukrainian-language YouTube video of his exploit has gone viral in Ukraine, and its illustration of official laxity might be better than an intelligence briefing in helping to explain why Ukraine’s government is in such danger. It also may be one of the most exciting things to happen in Cherkasy (population 300,000) in a while. (If your Ukrainian is rusty, watch the video with our summary below to help you follow it.)

On the screen, Chernyavsky explains his eksperiment:  He dons the camouflage uniform, without identifying insignia, worn by the “little green men,” the Ukrainians’ term for the seldom-identified Russian-speaking gunmen who seized control of Crimea in February and of eastern Ukrainian towns in the past month. He even decorates his ammunition pouch and the car’s radio antenna with orange-and-black-striped ribbons worn by the separatists in Donetsk.  And because many separatists and pro-Russian militants seem to be members of fight clubs and other sports organizations, Chernyavsky explains, he opts for black sneakers rather than military boots.

Local authorities have set up four checkpoints outside of town, he explains, but his driver friend easily avoids them by driving into the city on a parallel road.

At a roadside grocery  they stop and Chernyavsky hops out, rifle in hand, to ask directions of a man standing nearby.  “Excuse me, how do I get to the regional administration building?” he asks in Russian (1:46). The man helpfully explains: a turn just here, and then go straight all the way to the center. “You’ll see a three story building on your left and you’re there,” he says.

“Can I storm the building?” asks Chernyavsky.  The man shrugs:  “As you like.”  Chernyavsky  bounds toward the car, calling back to the man, “Russia is with you!”

They drive, Chernyavsky’s gun barrel  visible through the car window.  Another stop for directions, this time from a woman pedestrian (2:50). “Just drive straight on to the center, it’s right there,” she says.   “Are our guys there, those who want to separate from Ukraine?” asks Chernyavsky, always in Russian. For her, this is too much. She turns away, calling out, “No, we don’t want to separate!”

“Then why are you telling me where the provincial headquarters is?” Chernyavsky shouts after her.

The intrepid pseudo-separatists next pull up (3:23) in front of the provincial headquarters of the Security Service of Ukraine (SBU, the country’s main security and intelligence agency) and stop, careful to put on the car’s flashers.  Pedestrians, including a police officer, stroll by, ignoring Chernyavsky, uniform, gun and ribbons.

And so, unchallenged, they drive on to the provincial government building (3:50).  Chernyavsky steps out, hefting his weapon as he strides down the empty sidewalk.  “It would seem that dozens, or hundreds of men armed to the teeth could move through the city just as easily as we’ve managed, with the help of the locals pointing them on their way to come and seize this government building,” he tells the camera.

Inside the main entrance to the halls of state power, he meets, finally, a lone policeman (4:28).

“Good day! Can I get in please?”  Chernyavsky asks.

“Of course not. You’re not allowed to enter with a weapon,” answers the cop.

“May I seize this administration building?”  Chernyavsky presses, rather a polite putschist.

“What are you, joking?” asks the policeman, looking slightly nervous.

“What? I can’t? It’s not allowed?” Chernyavsky asks, surprise in his voice.

“Of course it isn’t allowed.” the policeman answers, a bit surer now.

“Well, okay, we’ll have to come another time,” Chernyavsky tells him.

Then, as he walks out, he speaks again to the camera: “They didn’t let us in, that’s good.”

Outside the government headquarters, Chernyavsky recounts to his camera how easy it all was. As he does, two policemen walk past him (4:45), but then turn back and finally ask what he is doing. Chernyavsky explains how he drove through the city, how people helped him with directions, how no one even tried to stop him despite the uniform, guns and even the separatist ribbons.

“Weren’t you afraid of my rifle?” he asks.

“No, we have pistols,” answers one of the young officers not very convincingly.

While the seizure of government buildings in three eastern provinces did not seem to raise many alarms for Cherkasy, 325 miles west of Donetsk, Chernyavsky’s satire did so. Four days after he posted his video to YouTube, he spoke in a phone interview today from his home, saying that provincial Governor Yuriy Tkachenko summoned officials to a meeting at which he publicly thanked Chernyavsky for raising awareness of the lax security in the city. Tkachenko ordered official security measures tightened and called for public vigilance against the appearance of any real “little green men,” Chernyavsky said.