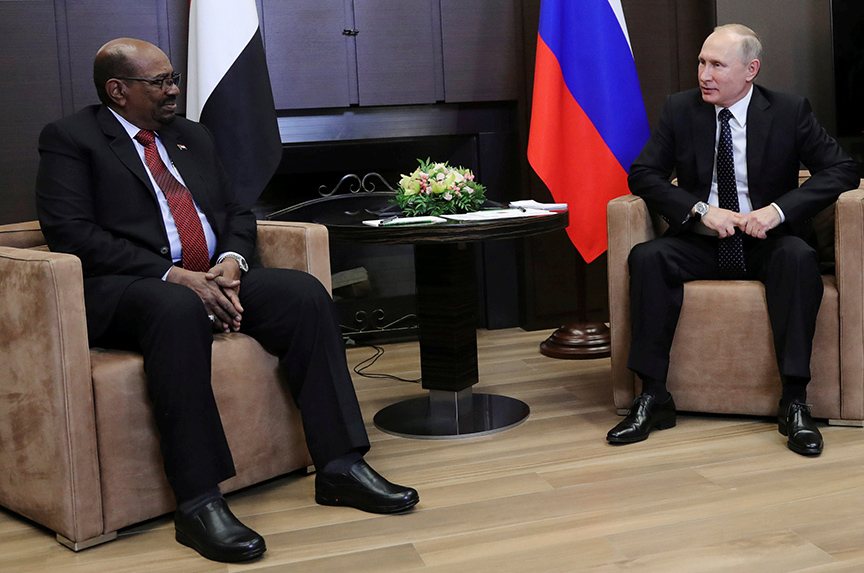 Sudanese President Omar al-Bashir and Russian President Vladimir Putin expressed an interest in deepening ties between their two countries when they met in Sochi, Russia, on November 23.

Besides stating his intention to deepen Sudan’s economic and military ties with Russia, Bashir hailed Russia’s military intervention in Syria and expressed gratitude for the Kremlin’s “position in the protection of Sudan.” Russian officials stated their intention to deepen Russian-Sudanese trade, specifically in the agricultural and energy sectors, and said Moscow considers Sudan a key partner in Africa.

Bashir’s trip to Sochi had much to do with Sudan’s internal crises. Conflicts in Darfur in western Sudan and South Kordofan and Blue Nile states continue to drain the country’s resources of which Sudan has far less following South Sudan’s independence in 2011, which cost Khartoum most of its oil reserves.

Despite efforts by the United Arab Emirates (UAE) and other Arab Persian Gulf states to improve Sudan-US relations—and the fact that such efforts have resulted in US President Donald J. Trump’s administration removing Sudan from its travel ban list and lifting sanctions on Sudan—Khartoum has good reason to doubt the odds of reconciliation with Washington.

Given the fact that Bashir is wanted by the International Criminal Court in The Hague on charges of crimes against humanity and war crimes, the Sudanese leadership’s pessimism is justified. Even if Trump would like to normalize ties with Sudan, the US Congress and influential civil society groups remain real barriers to rapprochement.

In Sochi, Bashir discussed the possibility of setting up a Russian military base on Sudan’s Red Sea coast. Sputnik Italia, a Russian media outlet, reported that Yuriy Shvytkin, deputy chairman of the defense committee in state duma, said this base could be established within six months.

Also in Sochi, Bashir accused Washington of facilitating South Sudan’s independence and sought Russian “protection from the aggressive acts of the United States.” From Bashir’s perspective, Russia (in addition to China) has been a reliable partner at the United Nations Security Council when it comes to counterbalancing Western criticism of his actions in the conflict in Darfur.

Khartoum sees Moscow as a partner that can help Sudan maintain its territorial integrity, just as it helped Syria’s embattled President Bashar al-Assad. Such thinking is in line with the views of leaders of Arab states across the ideological spectrum who see Moscow as a force for stability and a pillar of a new security landscape in the region.  On the eve of Bashir’s visit to Russia, Sudan became the first Arab state to obtain Russia’s fourth-generation Su-35 fighter jets.

In the bigger picture, Russia aims to make itself invaluable to Arab countries not only as an arms dealer, but also as an indispensable mediator. Moscow is playing a visible role in the Syrian crisis; it also has varying degrees of influence over key actors in Libya, Yemen, and the Qatar diplomatic crisis.

Although Sudan is often an afterthought in most discussions about the Middle East, it plays an important role as a bridge between the Arab and African worlds. As Moscow seeks to challenge American hegemony in virtually all corners of the world, Putin is determined to embrace Sudan, which he sees as an entryway into Africa.

Over the past few months, Moscow has signed a series of economic, nuclear, and military agreements with Nigeria, Niger, and Chad. With Sudan, the Kremlin has its eyes on the Sahel and the Horn of Africa as part of its geostrategic play across the continent.

Moscow, in particular, seeks to be part of the current and emerging energy picture from Nigeria to Sudan, especially in southern Libya where untapped natural gas lays awaiting a Libyan political settlement that permits Russian companies to enter the country’s south. The Kremlin also seeks to make inroads in central and southeast Africa, notably Mozambique, where Russia has its eye on natural gas reserves.

Coming the day after Putin hosted the presidents of Syria, Iran, and Turkey, Bashir’s Sochi trip was a clear example of how the Russian president is displaying much more confidence in challenging the United States not only in the Middle East, but also in Africa.