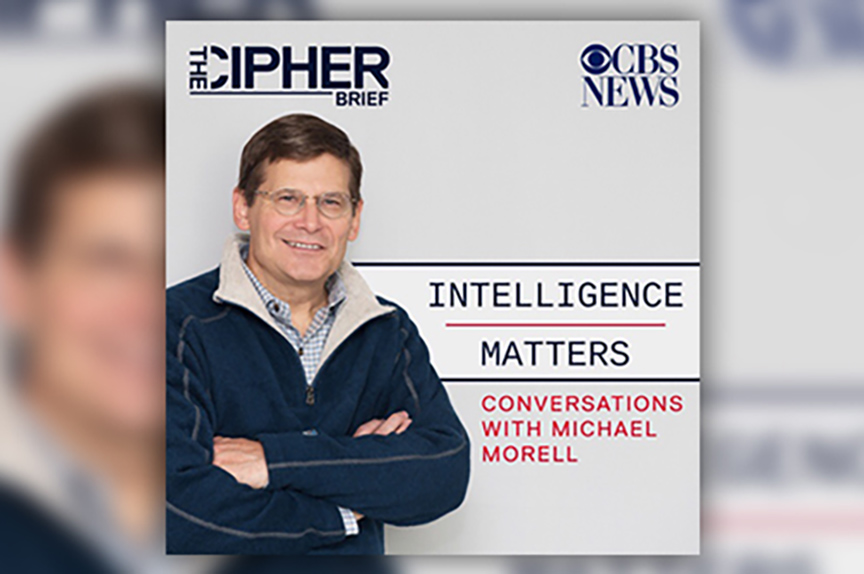 Michael Morell was with George W. Bush the day terrorists rammed hijacked commercial airliners into the twin towers of the World Trade Center and the Pentagon on September 11, 2001.

Morell, a former deputy and acting director of the Central Intelligence Agency (CIA), now brings his unique experience to serve as host of a weekly podcast—Intelligence Matters—presented by the Cipher Brief in partnership with CBS News. After just six weeks, Intelligence Matters ranks Number 15 on iTunes’ podcast list.

In an interview with the New Atlanticist, Morell, an Atlantic Council board member, discussed the podcast and why, in many ways, it reminds him of the times when he prepared to brief the president of the United States on important national security matters.

Here are excerpts from that interview.

Q: Why a podcast?

Morell: I thought that there were a bunch of people who had some important things to say about what is going on in the world and what our country should do about it who weren’t regular voices in the media. I wanted to give them an opportunity to get their voices out there.

One of the skills I developed working at the CIA, particularly as a manager of analysts, was asking the right questions. I thought that bringing this together with the right guests on [this podcast] might be helpful to people at a time when we have some important issues that we are dealing with in the world.

I am having a great time. What I have discovered is that it is more fun to ask the questions than to answer them! I have also discovered that being in a small soundproof room with one or two other people is a great place to be for an introvert who likes to talk. That kind of describes me.

Q: Could you elaborate on the extent to which your professional background has prepared you to be an incisive and engaging interviewer?

Morell: Before I would go to a deputies’ meeting, a principals’ meeting, or [a National Security Council] meeting with the president at the White House I would always get prepped in my office. Experts from both the operational side of the [CIA] and the analytic side of the Agency would come to my office and I would ask them all the questions I could possibly think of; things I thought I needed to know going into that meeting at the White House.

I really feel that the podcast is a mini version of a prep session for one of those meetings at White House, where my job was to put intelligence on the table for our country’s policymakers so that they could figure out what we as a country should do about some of the tough issues we were facing.

Q: What is the conversation that you hope to get started through Intelligence Matters?

Morell:  I am trying to do two things.  The first is to excite young people about national security, to help them think about how they might enter the business, and to thrive once in the business.

I spend a lot of time on college campuses with students as well as with young professionals who are starting out in their careers, in short, with people who are interested in serving their country in the intelligence community, the State Department, or the Defense Department. They are always looking for role models, career tracks, and at the career choices people made as they think of their own future.

So, one of the things that I am trying to do with almost everybody I have on the show is to spend a little time talking about their career; how they got from one place to another. One of the conversations I had with [former US President Barack Obama’s chief of staff] Denis McDonough was how in only seventeen years he went from new congressional staffer to White House chief of staff. I thought he had some really interesting things to say about that.

The second thing I am trying to do is educate Americans about some of the tough national security issues with which our nation’s leaders have to deal. Sometimes major media simplifies issues too much because they are trying to talk about it in thirty-second soundbites. North Korea, Iran, Russia, China, these are incredibly complicated issues. They are wickedly hard problems. You can’t really understand them in thirty seconds or sixty seconds. I am really hoping that in spending forty-five minutes or an hour we can do a better job, quite frankly, of educating the public.

Q: Whom do you see as your primary audience?

Morell: I think it’s people who are interested in national security and people who read those articles in the Washington Post, the New York Times, the Wall Street Journal or the Cipher Brief, or who read things that think tanks, such as the Atlantic Council, put out. And then, within that group, there is a special focus on younger people.

Q: At a time when cable TV is dominated by partisan noise, how do podcasts such as yours cut through the politics?

Morell: What I tell everybody is that there will be no politics on Intelligence Matters. There can be an assessment of national security issues, there can be a discussion of policy on those issues, but politics is not welcome. Trashing the other side of the aisle or trashing the president is not going to happen on Intelligence Matters. We are not going to go down that road. We can critique policy, but it has got to be fact-based. I actually think staying away from politics is attractive to the audience. And guests like it as well; they can avoid politics and spend more time on the real substance of tough issues.

Q: Is it hard to avoid politics given the prevailing environment?

Morell: Absolutely. It is hard because we all have pretty strong views about this president. It is sometimes very difficult to comment on a policy issue without taking a shot at him. I personally struggle with that when I am being interviewed. But I am trying really hard in my podcast to keep it focused on the issue and what we should be doing about it as a country.

Q: What are your thoughts on the current political discourse in the country?

Morell: One of the things that I get asked a lot when I speak is: “What keeps you up at night?” When I was serving in government, I felt I needed to respond with a national security answer. So, I would say something like “terrorists with nuclear weapons.” Trust me I worry about that, but that is not what really keeps me up at night. What really keeps me up at night, and I can now say it because I am no longer in government, is the failure of our politics in the United States, the failure of our political leaders to come together and make compromises that result in policies that push our economy and our society forward. The reason that makes me worry so much is that, at the end of the day, the most important determinant of a country’s national security is the health of its economy and its society.

This didn’t begin with Donald Trump. In some ways, people’s frustration with politics created Donald Trump. He is certainly not making it any better; in fact, he is making it worse. But, we have a very long way to go in fixing the problem.  And, in the meantime, our national security is going to suffer.

Q: Who has been your most interesting guest so far?

Morell: I have had two types of guests. I’ve had guests where we’ve spent most of the time focusing on their career and the interesting things that they have done. That would be [former CIA Director] Leon Panetta, Denis McDonough. And I’ve had guests where we’ve focused very heavily on an issue. I did a podcast with Joe DeTrani who was a senior intelligence officer focused on North Korea for his entire career. We spent the entire time talking about North Korea. I did another one with Norm Roule who for the last nine years has been the intelligence community’s most senior person on Iran. So, the whole focus [of the interview] was on Iran.

What I have found is that my audience is really interested in both types of conversations. I have really enjoyed them both for different reasons.

Q: How candid have your guests been, particularly those who like you come from intelligence backgrounds?

Morell: I have done three interviews [for the podcast] with people who know real secrets—Joe DeTrani, Norm Roule, and the current Director of the National Counterterrorism Center Nick Rasmussen. What I have found, even in my own situation of speaking to the media, is that senior people know where the line is. They know the difference between what is classified and what’s not. I don’t think people have been worried about what they say on the podcast and I don’t think anybody has come even close to crossing the line.

Q: What are some interesting nuggets of information that have you picked up in your interviews?

Morell: I learned from Denis McDonough what kind of defense his college football team played!

More seriously, I thought Joe DeTrani’s insights on North Korea were extraordinarily important. He made a really compelling argument that we need to sit down and talk to the North Koreans. That is not something you hear very often in terms of what our policy options are. You hear the policy options are military action or accept, contain, and deter. You don’t hear a lot of people saying: “Look, we have to sit down and talk to these people.”