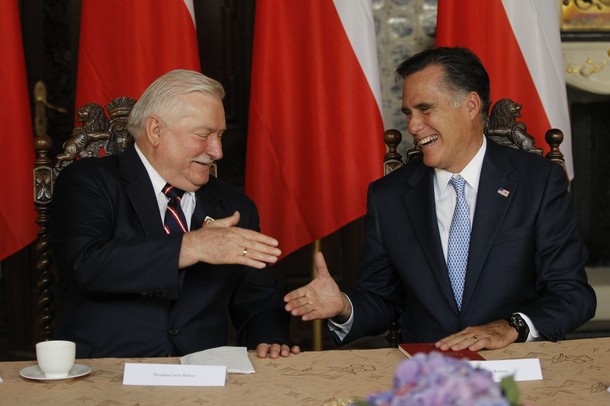 For his first overseas trip, Mitt Romney chose to visit three countries: Israel, Great Britain and Poland. Whereas choosing Israel and Great Britain did not surprise anyone, there is room for speculation about the decision to visit Poland.

The most common speculation in the Polish and international media is that Romney was hoping to increase his support among “Polonia,” the Polish diaspora living in the USA. According to this view, having a picture with Lech Walesa ,the icon of the anti-communist movement and 1983 Nobel Prize winner, and meeting the Polish president, prime minister and foreign minister would appeal to these voters. However, some commentators in the Polish media have noted that, whereas Walesa is a highly respected symbol of freedom and hope outside Poland, he is a controversial figure at home. His later foray into elective politics tarnished his reputation and the opposition Law and Justice party is actually much more popular among American Poles.

Some commentators point out that the explicit recognition of the “simple electrician from Gdansk”, Lech Walesa, was meant to attract the American working class. Others argue that American Catholics were on Romney’s mind when he chose to visit a country with a strong catholic image, giving him the possibility to emphasize the decisive role the worldwide beloved Polish Pope John Paul II played in the fall of communism.

But the most important reason for Romney to visit Poland was to highlight his critique of President Obama’s foreign policy, particularly the Russian “reset.”
It is not surprising that Romney tries to highlight security policy issues. Republicans have generally been seen as credible on topics of national security. And because voters support those candidates, whose party is perceived as competent in handling issues that dominate public debate, politicians highlight topics that are consistent with their party reputation. Such emphasis on mostly party-owned issues also helps candidates win the support of independent voters, whose electoral choices, particularly in close races, are of great importance. Success in dominating the issue agenda is, therefore, closely related to advantages at the polls.

Obviously, Romney has been trying to determine the foreign policy debate by highlighting the contrast between Obama’s and his approach toward Russia and the Central European allies. Arguing that Russia is America’s number one geopolitical foe, that Obama has abandoned and disappointed a few new NATO-member states in favour of warming relations with Russia, and that the US-Russian reset jeopardizes US security, is nothing new in Republican rhetoric (just think of John McCain during his presidential campaign calling Putin an old KGB agent, and wanting to exclude Russia from the G8). This, along with repeated references to the current Russia as “Soviet Union”, is an element of Romney’s election campaign aimed at that part of domestic public that is not content with the current strategic course of Washington. Romney has decided to present Obama’s apparent accommodation to Russia and inactivity in competing with Moscow for natural resources in the Arctic as a threat to American national interests, whereas aligning with non-democratic states at the expense of some NATO allies as a threat to America’s positive image abroad. This line of argument will most likely constitute the basis on which he is going to challenge his Democratic rival on national security issues, especially towards the end of the election campaign.

In this regard a picture with Lech Walesa can be very helpful. Praising Poland for its remarkable transformation from a poor, communist state to an established free market based democracy (and contrasting it with Russia where “once-promising advances toward a free and open society have faltered” and “the desire to be free is met with brutal oppression”) should remind the American public of the unique role the USA played in the international politics during, and shortly after, the cold. At that time, helping other states to free themselves from oppressive regimes encouraging post-communist states to transform their political systems toward democracy, liberty, and the free market was a distinctive feature of US foreign policy as well as a source of its soft power, recognition and stance in the world. Romney obviously tries to contrast the previous image of the USA with the current less flattering one, accusing Obama of keeping good relations with authoritarian regimes at the cost of US allies, downplaying human rights and not caring much about democratic movements in Russia, China and the Arab world. Arguing that Obama “abandoned” Poland by “scrapping” the Bush-era missile defence system and re-setting relations with Russia can present the idea that America has neglected its once outstanding reputation, compromising its security in favour of good relations with non-democratic states. Even as the cold war generation of Americans declines, this line of argument can still resonate with a large part of the American public.

Romney knows that Poland does not feel abandoned, either by the US-Russian reset, which already turned out to be more rhetoric than a real change in bilateral relations, or by redefining the missile defence project. Poland needs American military presence in Europe as a balancing power, both towards Russia and once again an increasingly more powerful Germany. Therefore it does not matter if US weapons and soldiers on Polish soil will be deployed within a national US or a NATO project. But Romney will continue playing with the Russian card in order to mobilize voter support at home, hoping that the image of himself with Walesa can contribute to winning the next presidential election.