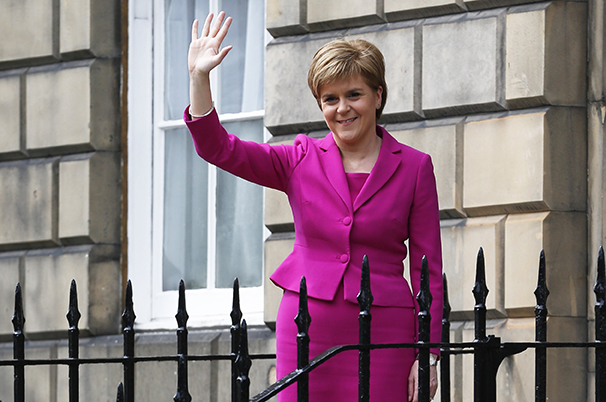 NATO partners must take a closer look at the defense policies of Scottish political parties in the wake of the Scottish National Party’s historic election victory on May 5 and its leader’s declaration that she reserves the right to hold a second independence referendum if the United Kingdom leaves the European Union “against our will.”

The SNP’s relationship with NATO has long been a fragile one. For more than thirty years—from the early 1980s to 2012—the SNP was opposed to Alliance membership for an independent Scotland, mainly due to NATO’s pro-nuclear stance. As a longtime opponent of nuclear weapons, the SNP has branded Trident as nothing more than a “status symbol” for the British establishment. Yet, as their electoral fortunes began to change and an independence referendum became more likely, the SNP leadership proposed and won a motion to reverse their opposition to NATO membership at the 2012 party conference. In response, three SNP Members of the Scottish Parliament (MSPs) resigned and the party leadership ordered party officials not to publicly discuss NATO.

Critics saw the party’s change of heart as a forced attempt to give credibility to the SNP’s defense policy and credence to comparisons between an independent Scotland and Norway—a small, socially democratic, independent, oil-producing state that maintains full NATO membership without possessing a nuclear deterrent.

The SNP leadership was only able to win the NATO vote by caveating the motion with the provision that Trident was to be permanently relocated from its current Clyde river base to one outside of Scottish borders. Owen Thompson, an SNP Member of Parliament, described the Trident system as “immoral, strategically useless weapons.” SNP leader Nicola Sturgeon said she was “worried” about any country that possesses nuclear weapons—hardly a reassuring sign for the UK’s NATO partners.

Before the 2014 independence referendum, senior SNP officials were told in no uncertain terms by NATO that an independent Scotland would not be accepted as a member state while they fought a territorial dispute with the rest of the UK over the basing of the Trident fleet. Asked to clarify her position, Sturgeon made it clear that a nuclear-free, independent Scotland was a higher priority than retaining NATO membership. In fact, the SNP’s defense “policy base” has only two pillars: rejecting Trident’s renewal and stopping nuclear convoys from moving on Scotland’s roads.

If the SNP finds cause to hold another independence referendum, the fate of Trident’s basing or even the entire Trident program could be in jeopardy. Further impediment to this process will undoubtedly impact the UK’s defense posture and, consequently, its credibility as a strong NATO ally.

The Scottish Labour Party’s position on Trident and NATO is equally concerning. The party has previously put forward motions calling for Trident’s renewal to be canceled, and has sided with its SNP colleagues in debates on these issues. For a short time, current Scottish Labour leader Kezia Dugdale supported Trident’s renewal and appeared ready to lead a debate on the issue within the party. However, after a party conference vote against renewal, the party’s official opposition on Trident renewal was confirmed in its 2016 manifesto. This position aligns with that of Jeremy Corbyn, the leader of the wider UK Labour Party, whose vehement opposition to Trident prompted George Robertson, a former NATO Secretary General, to state that the UK’s traditional defense allies have become “very, very anxious” with Corbyn’s position on Trident.

In the May 5 election, Scottish Labour was pushed into third place in the Scottish parliament. However, it will continue to be a valuable ally in the anti-nuclear coalition that exists on the Scottish political landscape.

Sturgeon has explicitly made her stance on a non-nuclear Scotland clear. Speaking last year on Radio 5 Live Breakfast, she stated: “I think national security is hugely important, of paramount importance, but of the something like 200 countries in the world, 190 or so of them don’t have nuclear weapons. Are we saying that these countries are less safe because of that?”

A strong resurgence by the Scottish Conservative and Unionist party saw it take second place in parliament and provides the only glimmer of hope for NATO. The Scottish Conservatives are the only major party to have a consistent and unshakeable commitment to Trident’s renewal, and to Scotland’s obligations as part of a NATO member country. Emerging as the official opposition, the Conservatives will now finally be able to provide a strong voice for Trident’s renewal in its Scottish base. However, with Scottish Labour, the SNP, and the Scottish Greens standing opposed to the very principle of Trident, the Conservatives are sure to have an uphill battle in the years ahead.

By spending two percent of its GDP on defense, the UK, and consequently Scotland, is exempt from a degree of scrutiny that exists for its underspending NATO partners. However, with a complex and uncertain political future and a large majority of anti-nuclear politicians, NATO should be keeping a close eye on developments in Scotland.

John Johnston is a communications intern at the Atlantic Council’s Brent Scowcroft Center on International Security.

Image: Scotland’s First Minister and Scottish National Party leader Nicola Sturgeon, seen outside her official residence in Edinburgh, Scotland, on May 6, has said she is “worried” about any country that possesses nuclear weapons. (Reuters/Russell Cheyne)