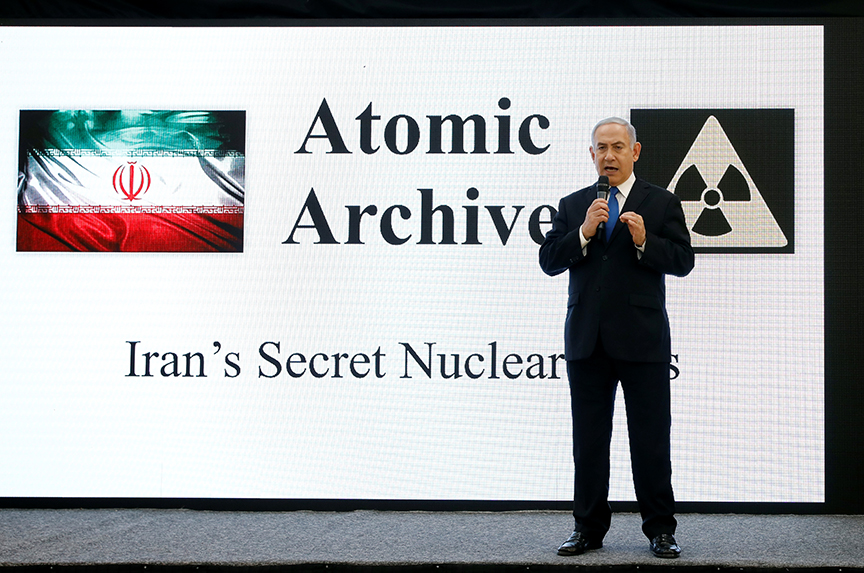 Israeli Prime Minister Benjamin Netanyahu on April 30 provided a twenty-minute PowerPoint presentation of secret Iranian nuclear documents, acquired by Israeli intelligence. The information revealed will be unlikely to change many minds about the wisdom of the nuclear deal with Iran, but it is significant. It shows that the Joint Comprehensive Plan of Action (JCPOA) was concluded under false pretenses and that Iran may currently be in violation of the accord.

To understand the significance of the information acquired for the nuclear deal, however, we must first review the steps necessary to build nuclear weapons. For Iran to go nuclear, it must complete three steps: (1) enrich significant quantities of uranium to weapons-grade levels; (2) develop a functioning nuclear warhead; (3) and possess a ballistic missile or other means to deliver the device to an enemy. Step 1 is the most difficult technical hurdle and the subject of the most contentious debates on the Iran nuclear deal. But all of the revelations in Netanyahu’s presentation were about Step 2.

That is why the revelations will be unlikely to change any minds. Iran deal proponents are pleased that the JCPOA puts caps on Iran’s uranium enrichment program in a manner that buys time and forestalls difficult decisions about bombing Iran or allowing Iran to get the bomb. Deal opponents dislike that the JCPOA gives a stamp of approval to Iran’s enrichment program and that the limits on enrichment expire in several years due to sunset clauses. The information presented by Netanyahu does not affect either of these calculations.

But, the revelations are, for lack of a better word, revealing.

Most importantly, Netanyahu claimed that illegal nuclear weaponization work continues to the present day. He said that “today, in 2018, this work is carried out by SPND, that’s an organization inside Iran’s Defense Ministry.” His presentation claimed that the name of the program for Step 2 changed in 2003, but that substantive work has continued under a new label with the same lead scientist and some of the same staff under the euphemism of “scientific knowhow development.” If true, this would be a clear violation of the JCPOA, which explicitly prohibits work on nuclear warhead design in Section C, Part 16 and Annex 1, Part T. This is a subject that deserves further scrutiny and on which the international community should press Iran.

Next, these revelations show that the Iran nuclear deal was consummated under false pretenses. A condition of the deal in a section labeled “Transparency and Confidence Building Measures” (Section C, Part 14) was that Iran “fully implement the ‘Roadmap for Clarification of Past and Present Outstanding Issues.’” This was a euphemism for Iran coming clean about the possible military dimensions (PMD) of its nuclear program. Netanyahu’s presentation shows that Iran did not come clean, but lied about many aspects of the PMD of its program in its reporting to the International Atomic Energy Agency  (IAEA) in 2015. The IAEA certified in December 2015 that it was satisfied with Iran’s answer to inquiries about PMD, but we now have 55,000 new pages related to this subject. At a minimum, the IAEA should reopen its investigation into PMD based on this new information.

Finally, this information helps to resolve a key debate between deal supporters and critics. Many supporters argued that Iran’s willingness to sign the JCPOA in 2015 reflected a strategic decision to give up the nuclear weapons option altogether. Netanyahu’s briefing lends more support to critics who have argued all along that Iran is merely waiting out the clock in order to resume its march to the bomb.

What does all of this mean for US policy toward Iran? It largely depends on one’s predisposition before Netanyahu’s presentation. Supporters can argue that this shows the value of remaining in the deal and constraining Iran on Step 1. Opponents can claim that these revelations provide grounds for pulling out of the deal because it was concluded under false pretenses and Iran may be in violation at present. Those in the middle can argue that we should use the mechanisms within the deal to press Iran on this new information and, if necessary, snap back international sanctions consistent with the deal’s terms.

The only untenable conclusion is the widespread, but incorrect hot take that Netanyahu’s briefing contains nothing new.

Matthew Kroenig is the deputy director at the Atlantic Council’s Scowcroft Center for Strategy and Security, associate professor of government and foreign service at Georgetown University, and a former adviser on Iran policy in the Office of the Secretary of Defense.