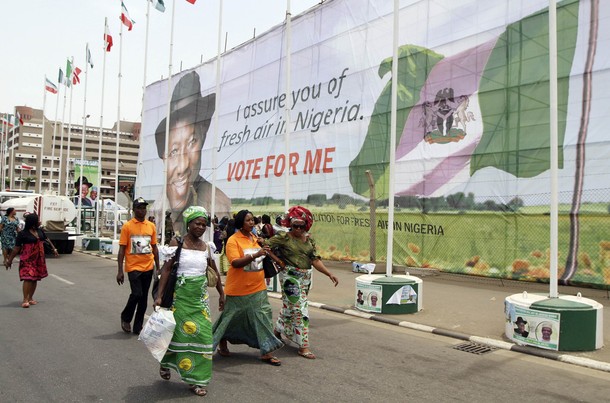 With everything from the ongoing fighting in Libya to the massive anti-regime protests in Yemen to the vicious endgame playing itself out in Côte d’Ivoire all happening at once, policymakers and analysts might be forgiven for not having paid much attention to the two postponements over the weekend of the Nigerian parliamentary elections which were supposed to take place on Saturday.

When election staff and voting materials failed to show up in various parts of the country, the poll was first delayed until Monday, before being pushed off until this coming Saturday—this despite the fact that voting had already started in major population centers like Lagos and Kano with large and enthusiastic turnouts reported. As a result of the postponement of the legislative elections, the presidential election as well as voting for state governors and assemblies will likewise have to be put off. These delayed polls represent a critical test for Africa’s most populous country.

It might be useful to recall why Nigeria is so important, both in its own right and for U.S. strategic interests. With proven petroleum reserves conservatively estimated to amount to some 36 billion barrels—the largest in Sub-Saharan Africa and the tenth-largest in the world—Nigeria is America’s fourth-largest supplier of imported oil. Last year, the United States imported an average of 1,025,000 barrels of oil per day from the West African country, according to the Department of Energy’s Energy Information Administration (by comparison, an average of 2,532,000, 1,280,000, and 1,094,000 barrels per day were imported from Canada, Mexico, and Saudi Arabia, respectively). Nigerian output and, consequently, exports to the United States, would have been considerably greater if insurgents and criminal gangs in the oil-rich Niger Delta did not routinely disrupt operations and cause oil companies to declare force majeure and suspend production. Moreover, Nigeria’s export blends tend to be the light or “sweet” crudes preferred by U.S. refiners as a gasoline feedstock because they are largely free of sulfur, unlike the heavy oils hailing from Caribbean or Persian Gulf sources.

Nigeria’s significance to American interests goes beyond its acknowledged importance as an energy supplier. Nigeria’s population of just shy of 150 million people makes it the eighth most populous country in the world and by far the most populous in Africa. Historically, the country has played a major role in resolving the conflicts besetting the continent and has long been the largest African contributor to United Nations peacekeeping operations. Currently, 5,676 Nigerian military and police personnel are deployed in six United Nations operations in Africa—the UN Mission for the Referendum in Western Sahara (MINURSO), the UN Organization Stabilization Mission in the Democratic Republic of the Congo (MONUSCO), the African Union/UN Hybrid Operation in Darfur (UNAMID), the UN Mission in Liberia (UNMIL), the UN Mission in Sudan (UNMIS), and the UN Operation in Côte d’Ivoire (UNOCI)—in addition to those working with blue-helmeted forces in places as far away as Haiti and Timor L’Este. Given that America’s willingness to undertake such assignments is rather limited even if U.S. forces were not stretched to the limits—currently a grand total of ninety-three U.S. personnel are deployed on UN missions, of whom twenty-nine are in Africa—the value of such a reliable regional partner should not be underestimated. As President Obama emphasized in his meeting last year with Nigeria’s President Goodluck Jonathan, “a strong, democratic, prosperous Nigeria is in the U.S. national interest.”

Thus there should be considerable concern that a country of such geopolitical importance should now be standing at a major crossroad, all the more so when it does so against a rather unpromising track record. The elections which have taken place since the military relinquished power have all been flawed. The campaigns in 1999 and 2003 were marred by violence, fraud, and other irregularities; while fortunately less violent than the two earlier votes, the poll in 2007 have been described by then-U.S. ambassador to Nigeria John Campbell as an “election-like event” whose results “destroyed any pretense that the elections were credible.” Moreover, Nigeria’s incumbent head of state, Goodluck Jonathan, was not elected to the presidency, but rather succeeded to it when his sickly predecessor, Umaru Musa Yar’Adua, died. His candidacy is itself controversial insofar as it repudiates the consensus about power-sharing that has hitherto helped keep the fragile peace among the country’s elites and prevented presidential elections from exacerbating the already nasty divisions between regions and religions by alternating the presidency between Christians from the south and Muslims from the north (Yar’Adua’s election in 2007 was supposed to usher in two terms of rule by a Muslim northerner following the preceding two terms served by Olusegun Obasanjo, a Christian from the south; the former’s death gave the presidency to Jonathan, another southern Christian).

It is to be hoped that the delay in the current round of polls represents a genuine effort to carry out an electoral exercise that is free, fair, and credible, indeed an authentic expression of the will of the Nigerian people. A stable Nigeria, led by government that its people view as legitimate, can be a major anchor for Africa and certainly an important partner for the United States, not just on security and energy issues, but also on a whole host of political and economic interests. On the other hand, given the numerous political, ethnic, and religious fissures that might just as easily break open if people feel cheated once more, a Nigeria that fails—or is pushed closer to the brink by manipulated polls—could very well wreak havoc across the West African region, if not the entire African continent.