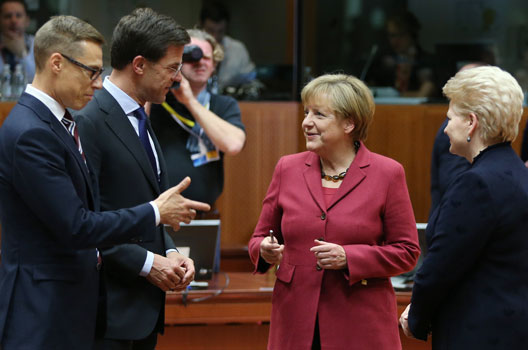 In November of 2015 the Council of State in the Netherlands decided that natural gas production in the province of Groningen should be capped at 27 billion cubic metres (bcm) per year. As the region suffers from earthquakes due to natural gas production, the level of such is a delicate topic for the Dutch political establishment.

As a result of these production limitations, the Netherlands has resorted to importing more natural gas. On June 21 of 2016, the State Supervisory Body on Mining concluded that no more than 24 bcm should be produced in the coming years. Following this announcement, the Dutch government decided to follow this advice and limit annual natural gas production in Groningen at 24 bcm for the next five years. The final verdict on the matter is expected to be reached before October of 2016.

Since the Netherlands is one of the premier natural gas exporters in north-western Europe, the decision to limit domestic production has important consequences. The Netherlands will have to resort to a greater share of gas imports in order to fill the gap left behind by the reduction in Groningen. Due to the strong ties between the Dutch and Russian energy industries and the availability of infrastructure, Russia is in pole position to supply more gas. Traditionally situated in a very liquid part of the European gas market, there are few in The Hague that see Russian gas supplies as a threat. Gazprom, Russia’s state-backed energy firm, is seen as Eastern Europe’s problem. That said, the Dutch government would be wise to not rely on Russian gas imports, lest it would risk bringing Eastern Europe’s problem much closer to home.

In 2015, the Netherlands purchased 7.6 bcm of natural gas from Russia; an increase of 29 percent from 2014. If production levels continue to decline, this number will increase. Gazprom wants to cash in on this decline in north-western Europe through the construction of its Nord Stream II pipeline, which would bring the total capacity of Nord Stream I and II to 110 bcm. The project is controversial for a variety of reasons. Central and Eastern European countries voice significant protest against the pipeline out of a fear that Gazprom will decide to halt the transit of natural gas through Ukraine—resulting in significant losses for countries along the route. European Commission President Jean-Claude Juncker stated that the pipeline cements Gazprom’s dominance in the European market; 80 percent of all Russian gas shipped to Europe would then transit via the northern route. Also, Nord Stream II will raise Gazprom’s share of the German market to nearly 50 percent. Furthermore, there are concerns that Nord Stream II’s onshore connections will hinder diversification projects in Central Europe and make it harder for suppliers to transport non-Russian gas via existing pipeline infrastructure. These objections are particularly delicate because Europe is in fact trying to reduce its dependency on Russian gas, rather than increase it. At the same time, the European Commission’s competition authority is involved in a formal investigation against Gazprom on account of possible abuse of its dominant market position in Central and Eastern Europe.

More pipe than demand can handle?

It is worth highlighting that demand for natural gas in Europe in 2015 was approximately 20 percent lower than ten years earlier. According to the International Energy Agency (IEA) it is difficult for natural gas to compete in a world of cheap coal, declining costs, and support for renewable energy. In 2014, the IEA predicted that European natural gas demand will lag behind other parts of the world until the mid-2030s. In light of this low demand, the overcapacity on global gas markets and the fact that existing gas import infrastructure in Europe remains underused, this raises the question of whether an expensive expansion of the Nord Stream pipeline is necessary at all. Aside from the fact that the project undermines EU diversification policy, it is possible that European climate policy will have reduced natural gas demand quicker than production levels in north-western Europe will have declined. This undermines the window of opportunity for Nord Stream II. A much more flexible option would be to resort to liquefied natural gas (LNG) supplies to compensate for domestic production losses in north-western Europe. Not only is the LNG market currently oversupplied, a significant share of Europe’s LNG infrastructure is not running at full capacity.

Legally, there are doubts as to whether the project is fully compliant with EU regulations. Although the Nord Stream II consortium consists of multiple international companies—including Shell, OMV, Uniper, Wintershall, Engie and Gazprom—at the end of the day there should be no illusions about who produces and ships the gas: Gazprom. Other than Russia, there are no other nearby producers that are capable of sending gas through Nord Stream and the Kremlin is well aware of this. Due to concerns regarding competition and energy security, the European Commission rightfully considers this an unwisely high concentration of supply from a single supplier along one transit corridor.

The project places Europe in a tough diplomatic position. The pipeline is a disaster for Ukraine, which stands to lose approximately two billion USD in annual transit revenues if Nord Stream’s construction causes Gazprom to halt operations on the Ukrainian route. The US firmly opposes the project given that it undermines Kiev’s position and causes divides in an already fragmented Europe. Germany, in particular, finds itself in an awkward position vis-à-vis its peers due to its stance on the pipeline. German Chancellor Angela Merkel insists full implementation of the Minsk II cease-fire agreement on the war in eastern Ukraine as a necessary precondition for sanctions relief on Moscow, yet Merkel has few qualms about designating Nord Stream II as a ‘purely commercial project’. Other EU member states have criticised Germany for its double standard on this issue.

Both Nord Stream I and its proposed sister project have Dutch participation. Dutch company Gasunie holds a 9 percent share of the Nord Stream I pipeline and Shell is a 10 percent shareholder of the Nord Stream II consortium. Both pipelines align with Gazprom’s strategy to buy up storage capacity and distribution networks behind what it sees as troublesome transit states such as Ukraine, Poland, and Belarus. The Kremlin’s reasoning is that—as a result of the completed project—it will be less affected by mood swings in Kiev, Warsaw, and Minsk. The 41 percent interest that Gazprom took in the Bergermeer gas storage in the Netherlands enabled the company to serve the United Kingdom’s gas market with greater ease, for example.

When considering available supplies and capacity, there are few obstacles that lie in the way of a greater share of Russian gas exports to the Netherlands; a decision to import more gas from Russia is politically charged. The diplomatic ties between the Netherlands and Russia have been under great pressure following the downing of a passenger jet in July 2014 en route to Malaysia from Amsterdam.

The criminal investigation into the perpetrators of the crash is expected to conclude later in 2016. If blame is placed with Russian support for separatist forces in Ukraine, public pressure on the Dutch government to not engage in energy deals involving Russia will likely increase. However, given the manner in which Gazprom operates in Central and Eastern Europe, it’s feasible to see that the Russian government will not hesitate to remind The Hague of the level of its investments made in the past few years—should the criminal investigation indict Russia. In other words, western countries are not immune from the kind of pressure that Gazprom exerts on Kiev, Minsk, Warsaw and other eastern European capitals. It is high time that concerns regarding Nord Stream II are taken seriously in the rest of Europe.

Dr. Sijbren de Jong is a strategic analyst with The Hague Centre for Strategic Studies (HCSS) in The Netherlands and a lecturer in Geo-economics at Leiden University specialized in Eurasian energy security and Europe’s relations with the countries belonging to the Former Soviet Union. He is the writer of the monthly Crude World column on power politics in Europe’s eastern neighborhood for EUobserver.