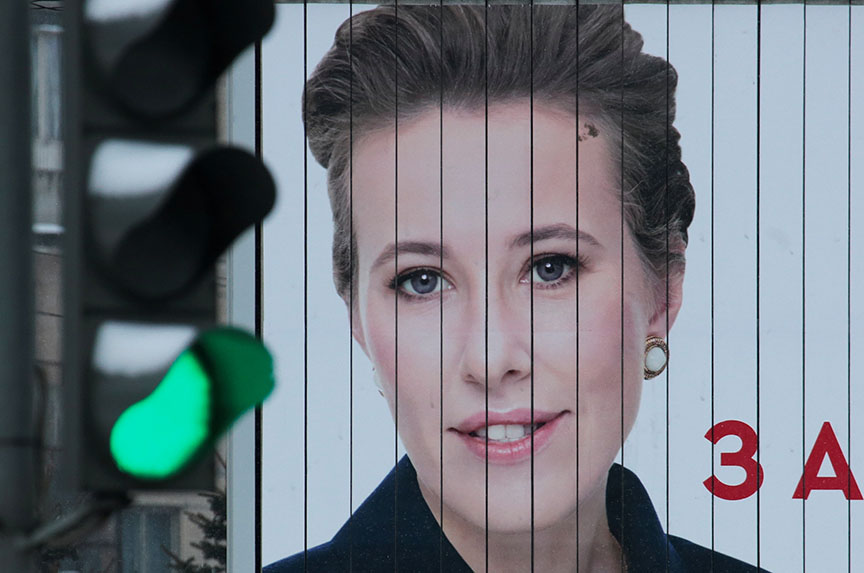 Ksenia Sobchak sees a “big double standard” in fellow Russian opposition leader Alexei Navalny’s criticism of her decision to stand in the presidential elections in Russia on March 18.

In December of 2017, Russia’s Central Electoral Commission determined that Navalny was ineligible to participate in the presidential election citing a sham corruption conviction.

In near-comical proceedings, Navalny was accused and convicted of embezzling timber while advising a regional governor. The European Court of Human Rights ruled that Navalny was unfairly convicted.

Navalny has held rallies across Russia calling for a boycott of the election. He maintains that the participation of other opposition candidates in an environment characterized by repression—not to mention virtually zero media freedom—will only serve to provide Russian President Vladimir Putin with just enough evidence to generate the illusion of political competition.

For her part, Sobchak argues that Navalny is a hypocrite who equates the Russian opposition with himself and his personal fortunes.

But Sobchak is wrong to stay in the race for a number of reasons.

The prevailing conditions in Russia and divisions within the opposition benefit one man—Putin. Navalny cannot join Sobchak as a presidential candidate. The Kremlin has illegitimately stripped him of that right.

Sobchak could, however, join Navalny in his boycott of the election. Instead, she has opted to carry on her campaign, and to do so in arguably the most counterproductive manner imaginable.

Earlier in February, Sobchak visited Washington where she received the sort of fawning minute-by-minute coverage from US media outlets that few foreign candidates polling at 1.5 percent enjoy.

Assessed in a vacuum, Sobchak largely did and said the right things while in the United States. She eloquently delivered remarks at the Center for Strategic and International Studies and the National Press Club, where she openly called Putin’s Russia an autocratic country (despite recently saying that she would not publicly insult Putin). She apologized for Russian interference in the US elections in 2016 and referred to the Kremlin’s invasion of Ukraine as a violation of international law. Sobchak even called for Russia to “embrace” NATO. While in Washington, Sobchak also attended the National Prayer Breakfast.

Sobchak’s critics have questioned why she would travel to Washington mere weeks before the Russian election. The opportunity costs seem high. A serious candidate, they argue, would be focused on engaging voters back home and ensuring a high turnout among Russia’s liberal and moderate electorates. But the more fundamental question is why she would come to the United States at all. To say that the United States doesn’t exactly play well in Russia is an understatement.

That’s both a function of the anti-Americanism that Putin himself has deliberately fueled and the existence of Russian nationalism in its own right.

A temperate nationalist himself, Navalny gets this. It’s difficult to imagine that Sobchak doesn’t. As a result, her trip to the United States was political malpractice at best and a conscious decision to aid Putin at worst.

If Sobchak truly is the sincere opposition figure she claims to be, she should withdraw her candidacy and help ensure that the Russian presidential election is a demonstration of Putin’s repression rather than his popularity.